Dan Gentilucci and Pat McCann enjoy technology and history, but the youngsters are gaining ample knowledge of physics as successful golfers for Roman Catholic High School. Their dependable drivers and precise putters assisted their team’s climb to the Catholic League’s upper echelon and nearly secured postseason glory for the Cahillites.

“Next year can be greater,” 16-year-old McCann, of the 2400 block of South Woodstock Street, replied.

Their 121-year-old site possesses a renowned basketball tradition, so the juniors are hoping to add fairway fame to its trophy case. They have wielded their clubs for three seasons and approached the pinnacle this campaign. They and their mates scored 14 wins from 15 Catholic League contests — good enough for second place — and tied a school record for fewest defeats.

Teams field eight players for nine-hole competitions, with the six best scores in the stroke play format giving a squad its tally. The locals helped Roman Catholic to adjust its annals Sept. 21, as they contributed to an 18-stroke win over St. Joseph’s Prep that required 198 shots, a new low.

“We put up a great effort,” Gentilucci, a two-time All-Catholic selection, said.

“Golf is just like everything else,” McCann added. “Whenever we miss chances, we have to recover.”

The boys began to form their competitive maturity at The First Tee of Philadelphia, 1954 Pattison Ave., a seven-year-old program endowing 6- to 18-year-olds with golf and life skills programming. McCann became a pupil at 10, and Gentilucci joined at 13.

“My grandfather introduced me to golf,” McCann said of Joe Murray, who also proved instrumental in his decision to attend Roman Catholic.

Gentilucci had taken swings at FDR Park’s driving range before deciding to up his knowledge of the sport. As many initial golf buddies were choosing Roman Catholic, he picked the school, too.

They have yet to enjoy a class together, but the ball bashers revel in exchanging approaches to becoming better players. Both confessed to an infatuation with striking great shots and with growing more confident at each match and event.

“The First Tee teaches us STAR, which stands for Stop, Think, Anticipate and Respond,” Gentilucci said, adding that golf has aided his ability to be more composed when facing pressure.

By virtue of their skills, the two find themselves experiencing extra exposure, but they never cringe when the spotlight becomes theirs. They aim for cups and contentment as members of the Philadelphia Section PGA Junior Tour. Whereas the school-based season lasts from August to October, the tour runs from January to November.

“The tour is fun because it keeps everybody sharp,” the Packer Park resident said.

“The tour encourages me to improve,” McCann, a southpaw, said. “It and The First Tee are big helps.”

The boys can rely on both for wisdom until they turn 18. The First Tee, which also has a playing course at Roxborough’s Walnut Lane Golf Club — Roman Catholic’s home turf — enables the enthusiasts to participate in national events. Gentilucci and McCann will look for a pre-Thanksgiving feast at the Nov. 19 to 21 Golf Channel Invitational in St. Augustine, Fla.

The trip will strengthen their wanderlust, as the boys have gone to Florida and South Carolina to play, with Gentilucci also venturing to Virginia.

“Competing out of state presents even more chances to excel and prove ourselves,” McCann said.

Junior year signals the college application process, and the two have begun to plot where they will wield their wits and their woods.

“I’m looking into little schools in Florida and some places in North Carolina,” Gentilucci said.

“I’m not necessarily looking to link college and golf, but we’ll see,” McCann, who is favoring Penn State University, said.

Gentilucci desires a spot on the PGA Tour, while McCann yearns to be some kind of professional player or an instructor. Golf will return to the Olympic Games in 2016 and ’20, so the locals may come to covet gold if they maximize their strengths and diminish their weaknesses. They consider their tee shots their most potent and vow to work on their short games.

The boys lack fear as they prepare to be senior leaders and search for “bigger ponds,” as Gentilucci said.

“I’m excited about what’s to come,” the older athlete, whose best score is a 6-under-par 63, said.

“Golf is a game designed to teach people to persevere,” he said. “That’s part of the reason I like it.” SPR 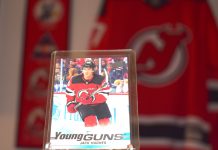 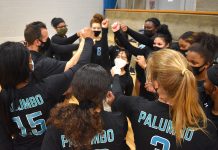 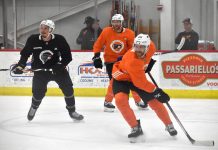