Some surprises occurred but the last 12 months will go down as a period when the great became greater and everyone added more displays of guts to the community’s annals.

David Melaragni, a student at Christopher Columbus Charter School, 1242-46 S. 13th St., strengthened his hockey résumé with his selection to the 98 East Coast Selects-Q Team. The honor took him to Sweden and Latvia for competition.

Under the leadership of coach Steve Gittleman and sniper Demetrius Davenport, the boys’ basketball team at The Academy at Palumbo, 1100 Catharine St., reached 19 wins, the highest tally in its three-season history. The total earned the Griffins their third straight postseason berth.

The Neumann-Goretti boys’ basketball team extended its winning streak in the Catholic League to 50 games with a last-second home win over St. Joseph’s Prep. The Saints, who overcame a 14-point deficit, set a league record for consecutive triumphs by claiming a 77-74 decision.

With sophomore forward John Davis and freshman guard Ja’Quan Newton leading the way, the Saints made history at The Palestra by becoming the first parochial players to register three straight undefeated league campaigns by defeating Archbishop Carroll for the Catholic League title. The Huskies won their first Public League girls’ crown by downing rival Central at the Liacouras Center.

The chess stars at Palumbo advanced to the Philadelphia Scholastic Chess League final. The Griffins had company in taking on big challenges, as the Saints captured the city title against Philadelphia Electrical to kickstart a run to the state playoffs and the Huskies dropped the city championship to Archbishop Wood but still earned a spot in the state pool.

Twins Marcus and Markieff Morris, products of the Prep Charter boys’ basketball program, led the Kansas Jayhawks to a No. 1 seed in the NCAA Division I Men’s Basketball Tournament. Jackson and Jardine helped the Orange to receive a No. 3 berth, and Temple University guard Ramone Moore, out of South Philadelphia High School, 2101 S. Broad St., helped to secure a No. 7 spot for the Owls.

A graduate of Edward Bok High School, 1901 S. Ninth St., point guard James Jones led Doylestown’s Delaware Valley College to a school-best 17 wins. His endeavors helped him to win the Freedom Conference’s Player of the Year Award, along with many other distinctions.

Pugilist Joe Zimbello, of 11th and Mifflin streets, proved he is a powerful puncher by winning the Eastern District championships, becoming the City conqueror in the process. His three victories also brought him the tournament’s Best Boxer distinction.

The Neumann-Goretti baseball team made mincemeat of its first few opponents with a strong blend of upper- and underclassmen setting up the East Passyunk Crossing unit for a remarkable year.

Erik Reitinger, a Lower Moyamensing resident, continued his multisport career by earning a 13th-place finish in the USAT Duathlon National Championships in Tucson, Ariz. The educator landed a spot on the U.S. unit that ventured to Spain for September’s Short Course Duathlon World Championships.

The third Battle of Brotherly Love basketball tournament featured 13 area players, including five from Neumann-Goretti and two former Southern stars, in a geographical duel. The ballers represented South and West Philadelphia and a county team.

Six area high school baseball teams advanced to the playoffs in what turned out to be a fantastic spring for secondary play.

Lower Moyamensing’s Cassandra King prepared for her 11th appearance in the Liberty Classic. The cyclist, a native of Puerto Rico, accumulated numerous accolades over her 22-year career, attaining Category 1 status and cruising to victories in prestigious events.

Dom Raia, a right-handed pitcher for the Girard Academic Music Program, 2136 Ritner St., finished his career with an inning of work at the 26th annual Carpenter Cup Classic at Ashburn Field, 20th Street and Pattison Avenue. His tenure with the Girard Estate school included a school-record 110 hits and a no-hitter.

The Morris twins and Rick Jackson looked to take their games from the college hardwoods to the professional ranks through the NBA Draft. The siblings left school a year early to post up fellow big men, while Jackson hoped to earn a roster spot after four years of service to his New York-based university.

NBA Commissioner David Stern shook the mighty mitts of the Morris boys June 23 at Newark, N.J.’s Prudential Center after announcing their names on draft night. Markieff went to the Phoenix Suns with the 13th pick, while the Houston Rockets took Marcus minutes later with the 14th selection.

The second annual Kids’ Fair at Bardascino Park, 10th and Carpenter streets, featured a spirited bocce tournament. Shane Cohen-Mungan, of the 700 block of Pemberton Street, and Marcel Roscioli, of the 1200 block of Ellsworth Street, won three matches to clinch the championship.

Then-Eagles cornerback Trevard Lindley played with area youngsters at Shot Tower Playground, 131 Carpenter St., in preparation for his eponymously named community outreach football clinic. The practice session included eager boys and girls under the guidance of Joe and Mike Richmond, the heads of I Am Focused Inc.

Neumann-Goretti graduate Kadeem Custis led a local contingent of college football players gunning for glory. The Grays Ferry native and defensive lineman showed his speed for the Temple Owls, a member of the Mid-American Conference.

To honor legendary broadcaster Harry Kalas, the Philadelphia Phillies unveiled a bronze statue of their long-time employee at Citizens Bank Park, 1 Citizens Bank Way. The Illinois native passed away April 13, 2009, six months after announcing the final out of the ’08 World Series.

Former Neumann-Goretti player Peter Piccoli traveled to Minnesota for the Reviving Baseball in Inner Cities tournament. His squad fell in the semifinals, with the Marconi resident and now Prep Charter player making key contributions during its run. The Phillies honored him and his teammates with a congratulatory event at Citizens Bank Park.

The Eagles added nine notable players during the offseason. While the mix newcomers hoped to make the 13th year of coach Andy Reid’s tenure a Super Bowl-bound campaign, the team entered the final week of the season out of the playoff picture.

Former Southern stud DeShon Minnis decided to take his speed and determination to the Lone Star State, signing with Texas Tech University. The guard was looking to lead the Red Raiders back to the NCAA Tournament for the first time since ’07.

Packer Park’s Raimondo Partito, right, worked on headers and passes as a member of the YSC Union Juniors. The youngster, a student at Philadelphia Performing Arts Charter School, 2600 S. Broad St., earned his spot thanks to seven years of exceptional play in numerous leagues.

Bok student and West Passyunk resident Craig Lawson Jr. participated in his third Buddy Walk and Family Fun Day at Villanova University Stadium. The teenager joined with family and friends to support the fight against Down syndrome.

Roman Catholic High School golfers Dan Gentilucci, of the 3100 block of South 18th Street, and Pat McCann, of the 2400 block of South Woodstock Street, guided the Cahillites to the final of the PIAA District 12 Championships. The juniors almost helped their team to eke out a dramatic victory, as it fell to St. Joseph’s Prep in a playoff.

The Bok girls’ volleyball team romped to the Public League’s Silver Division title by going undefeated in the regular season. With coach Anthony Scafidi and sophomore Justice Pressley leading the way, the unit earned a playoff date with Palumbo, which inflicted its season’s lone blemish.

The Bok football team welcomed Frank “Roscoe” Natale to the head coach’s role and gave its leader a playoff shutout against Prep Charter. Star senior running back Shaquil Sammons, of Southwest Philadelphia, blasted the Huskies for 208 yards in the 32-0 romp.

Neumann-Goretti broke ground on a field house that will help the preparation of its baseball, football and soccer players. With a predicted April opening, the site will occupy space adjacent to the St. John Neumann Place, 2600 Moore St.

Thirteen teenagers, including many from Palumbo, ran in the Philadelphia Marathon. They tested their resolve along with running leader Joe Whelan as members of Center City’s Students Run Philly Style.

Neumann-Goretti and Southern prepped for their 77th Thanksgiving meeting, with the former hoping to extend its winning streak and the latter aiming for an upset. The Saints would cruise to a 35-7 victory, remaining undefeated in the series since ’04.

Three dozen basketball players with local ties were helping college basketball teams to outduel their foes this year. Prep Charter topped the area squads with 14 products, with Neumann-Goretti in second with 11.

Horace Furness High School, 1900 S. Third St., retired the No. 1 jersey of running back Sharif Smith, a Palumbo student. The former Point Breeze resident ended his four-year career in fifth place on the city’s all-time rushing list and will appear in tomorrow’s Chesapeake Bowl in Maryland. 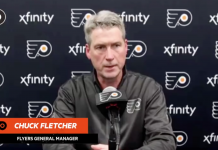 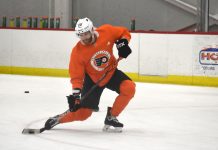