Police are hoping these images can lead them to the perpetrators of an aggravated assault in Whitman.

On June 23, authorities released the likenesses of the juveniles, who, according to the complainant, pelted him with rocks at 10 p.m. May 29 as he sought shelter from the rain inside the TD Bank vestibule at 2653 S. Fifth St. The homeless victim received transportation to Methodist Hospital, where personnel treated him for minor cuts to his head and neck pain. 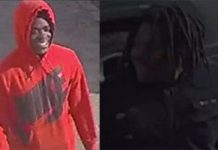