The event, which will feature more than a 100 job opportunities, aims to provide employment resources to

Assigning students various tasks, like sharpening pencils or attending to the bathroom, he noticed a shift in their behavior — a correlation, he’d come to realize, that also exists in his backyard.

Although he is no longer a teacher, Shenandoah wanted to continue this vision.

Perceiving unemployment’s connection to a slew of societal concerns, Shenandoah kicked off an annual job fair last summer at the Salvation Army at Park Stinger — just east of the Forgotten Bottom in Grays Ferry.

While the event experienced a solid turnout of about 150 people or so, this year Shenandoah, along with a team of organizations, is aiming to amplify it, relocating the fair to the recently built Pennovation Center on Saturday, June 9, from 10 a.m. to 1 p.m.

Recruiting more than 50 city employers and agencies, like SEPTA and PECO, featuring nearly a 100 job offers, Shenandoah says the upcoming event hopes to reach as many South Philly residents as possible. From the University of Penn to the Urban League of Philadelphia, close to a dozen organizational partnerships from around the city are working to make the fair a reality.

The genesis behind the first fair stems from Shenandoah’s experience going door-to-door throughout the community, encouraging neighbors to vote for the next district attorney in spring 2017.

But he realized that residents were more concerned with upcoming employment than the upcoming election, recognizing people are often more worried about immediate problems, like simply paying a household bill, than nationwide issues four years down the road.

“It’s hard to ask someone for a vote when they don’t have work,” he said.

From there, Shenandoah started posting hundreds of job opportunities on social media — a platform the Grays Ferry Civic Association has been working on since its inception three years ago.

Along with addressing zoning issues and coordinating public services like Parent Cafés, when the RCO established itself, it considered the dissemination of public information as a cornerstone of the group.

“No matter how big or contracted we got, we always maintained the communication with information that was coming down,” said Grays Ferry Civic Association President Michael Bradley. “We’ve seen the neighborhood changing — not only demographics but just in the way of how neighbors communicate.”

And while Shenandoah’s Facebook, Twitter and Instagram posts were reaching some, he was thunderstruck once more when meeting residents, particularly older citizens, who did not even own computers.

To tackle this “digital divide,” as Shenandoah describes, he started planning for that first job fair, aiming to foster more face-to-face networking.

The second annual fair falls around the same time and place of conversation surrounding the projected SEPTA bus Route 49, which has been considered by the city over the past couple of years. The route, connecting Grays Ferry to Strawberry Mansion, will journey through University City, Center City West and Brewerytown — some of the city’s largest employment hubs.

Shenandoah says the potential route, which would operate seven days a week, could transform Grays Ferry, satisfying his three keys to an improved community — housing, workforce development and transportation.

Hamlets throughout Grays Ferry, like the Forgotten Bottom, can quite often feel forgotten, as ideally the route — and the fair — will help to bridge the area with the rest of the city.

Compared to its neighbor — the transformed Point Breeze region — Bradley says Grays Ferry still maintains a high level of apathy in some ways, which is why the job fair is especially needed in this locale.

“To bring the fair is like ‘hey listen, there are jobs down there,’” he said. “We want you to go down there and poke around for some jobs, so I think it’s perfect.”

“I could have done a job fair anywhere, but I kept hearing my neighbors say they’re looking for work,” Shenandoah said. “I wanted to make sure it was somewhere close. So, I brought it here to South Philly.”

For more information on the fair, contact Kyle Shenandoah at kyleshenandoah@gmail.com.

The second annual career fair is scheduled for Saturday, June 9 from 10 a..m to 1 p.m. at the Pennovation Center located at 3401 Grays Ferry Avenue. 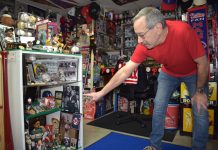