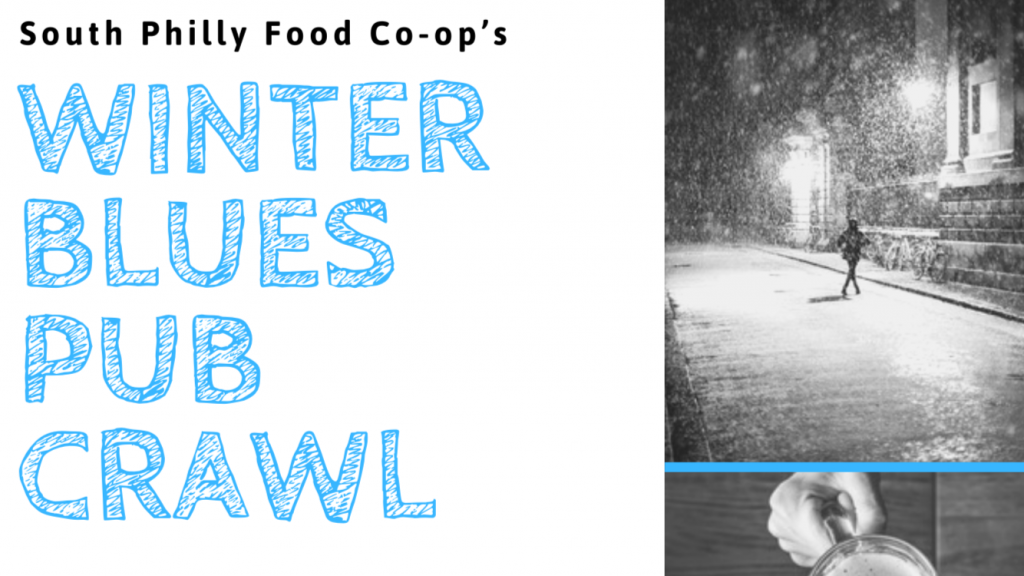 Residents from South Philadelphia and beyond are invited to celebrate good times while supporting community-based food alternatives at the first ever Winter Blues Pub Crawl hosted by the South Philly Food Co-op tomorrow, Feb. 23, from 5-9 p.m. The event, which will take place at numerous bars up and down East Passyunk Avenue, is designed to help raise the last bits of money necessary for the co-op to open, which it’s on track to do this summer.

“We decided that since we’re in the middle of winter and folks are holed up in their own houses, we wanted to bring winter cheer to the neighborhood,” said Carolyn Huckabay, a board member and head of the co-op’s marketing and communications committee. “It’s really just a fun get-together in a time of year when people don’t tend to be out and about in the neighborhood.”

The event is sponsored by the East Passyunk Avenue Business Improvement District and Founders Brewery. Many participating bars will have Founders on draft, and $1 will be donated to the co-op by Founders for each Founders beer purchased.

According to Huckabay, the first 50 people to show up to the pub crawl will get a free beanie. Guests can check in for the event at 5 p.m. at either Garage Passyunk (the northernmost bar of the pub crawl) or Pistola’s Del Sur (the southernmost venue of the event) and work their way either up or down the avenue.

“The bars have been amazing, too, because they’re are not only willing to be hosts but they have donated raffle prizes and gift card raffles,” Huckabay said. “We’re going to have a raffle prize to give gift certificates to one of each bar.”

Tickets for the pub crawl, which can be purchased at southphillyfoodcoop.org, are going for $20.19 to celebrate the year the co-op will likely open. Huckabay said the co-op, which will be located at 2031 S. Juniper St. in East Passyunk, is on track to begin construction early this summer and open by “maybe towards the end of the summer,” she said. “Once we hit our fundraising goal, we will start construction.”

“You can start with $25 and pay monthly or quarterly until you’re done,” she said. This way, the co-op is more accessible to lower-income people in the community.

“Part of what makes co-ops so special is that they’re for everyone,” Huckabay said. “We want to make it as inclusive as we possibly can.”

According to Huckabay, community food co-op’s are superior to typical corporate-owned grocery stores because they allow the money and jobs to stay in the community.

“Local control is really big for us,” she said. “We’re living in a world where Amazon bought Whole Foods, and big corporations own most grocery stores. We offer something totally different from any of that because our grocery store isn’t owned by anyone except the thousand people in the neighborhood.”

Huckabay said plans for opening a co-op in the community date to 2010.

“When things in this country feel a little bit out of control, this is something to make you feel in control,” Huckabay said. “That’s why I’m a member.”