The informational community meeting was hosted by the South of South Neighborhood Association (SOSNA). The property is bound by Washington Avenue to the south, Kimball Street to the north, 24th Street to the east and 25th Street to the west.

“The diversity of units creates price points that really improve the housing stock both rental and for-sale product,” Grigos said. Grigos said that the development team would prefer the retail space go to local businesses.

Renderings of the project’s architecture show an industrial theme.

“We want to make sure that we respect the industrial character of Washington Avenue,” said Grigos. “We want to have a product that we’re really proud of that looks really good.”

Grigos said that, prior to meeting with residents, the development team met with members from SOSNA, North of Washington Avenue Coalition, Kimball Street Near Neighbors and the city’s planning commission. Because of their influence, Grigos said, the development team said they would pledge to reserve 10 percent of the residential dwellings (eight of the 80 units) for moderate-income housing, which is 60 percent of the area’s median income.

“Affordability is a big issue today in the city and in speaking with stakeholders,” Grigos said, “something we heard was that we should really have an affordable component.”

The lot would contain 38 private parking spaces for residents only in an underground parking garage. Those patronizing the businesses in the commercial spaces would need to find on-street parking if they drive.

The lot is zoned I-2, which does not allow for residential use. To build the project, Ostroff’s team must either file for a variance or seek to change the actual zoning of the lot, which would require action from City Council. The team has yet to decide which path they will take.

Grigos said that construction of the project would likely be completed in phases, with the townhomes, which would be built along Kimball Street, likely being completed first.

The main concerns from residents included the lack of parking spaces and the parking garage entrance, which, according to renderings, would be on 24th Street. Residents complained that this would clog up traffic on Carpenter Street because of traffic coming from the South Street Bridge and Center City.

Grigos said the development team “can look at doing a traffic study” to ease neighbors’ concerns.

Residents also brought up the possibility of a Community Benefits Agreement (CBA) to make sure that commercial space would indeed go to local businesses, traffic studies would be conducted and that the development team would follow through on making good with the community. SOSNA and Grigos both said that the two parties had indeed been working on a CBA.

“I’ve had conversations with SOSNA about a community benefits agreement,” Grigos said. “We’re going to continue to work on that. Everything we say we’re going to do we’re happy to put in writing and stand behind it.”

“We’re continuing to have conversations about it,” said SOSNA vice chairman Nolan Tully, who noted that the CBA will largely depend on whether Ostroff’s team either files a zoning variance or seeks to change the zoning of the property.

Below are renderings of the project provided by Ostroff: 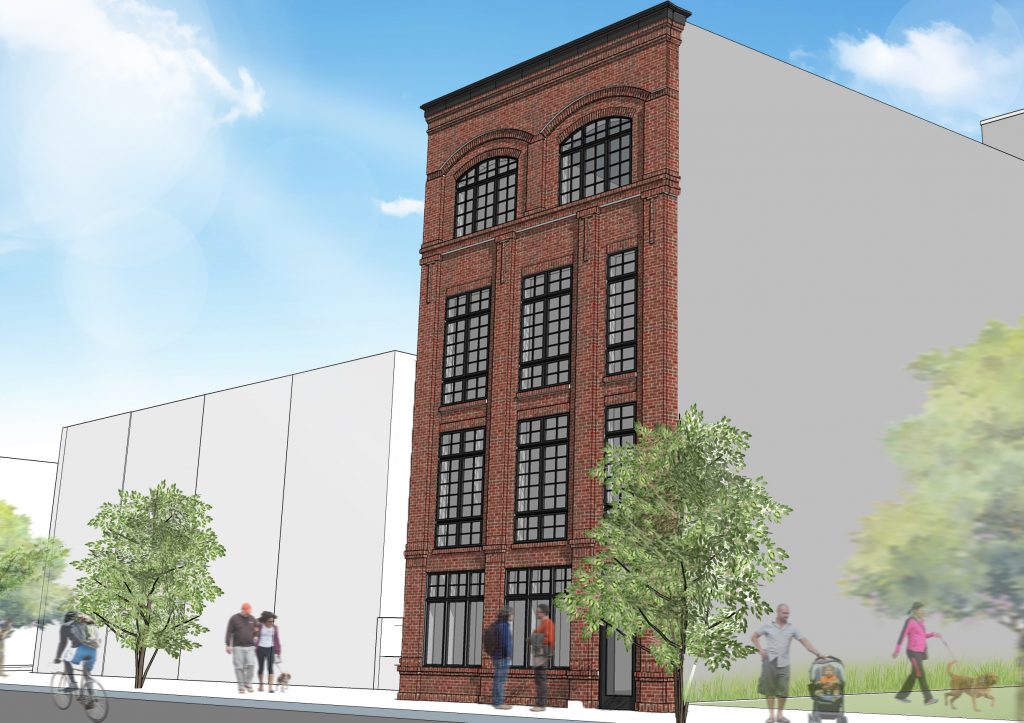 Correction: A previous version of the article erroneously attributed a the quote in the last paragraph to SOSNA chairman Dave Zega instead of vice chairman Nolan Tully. The issue has been corrected.