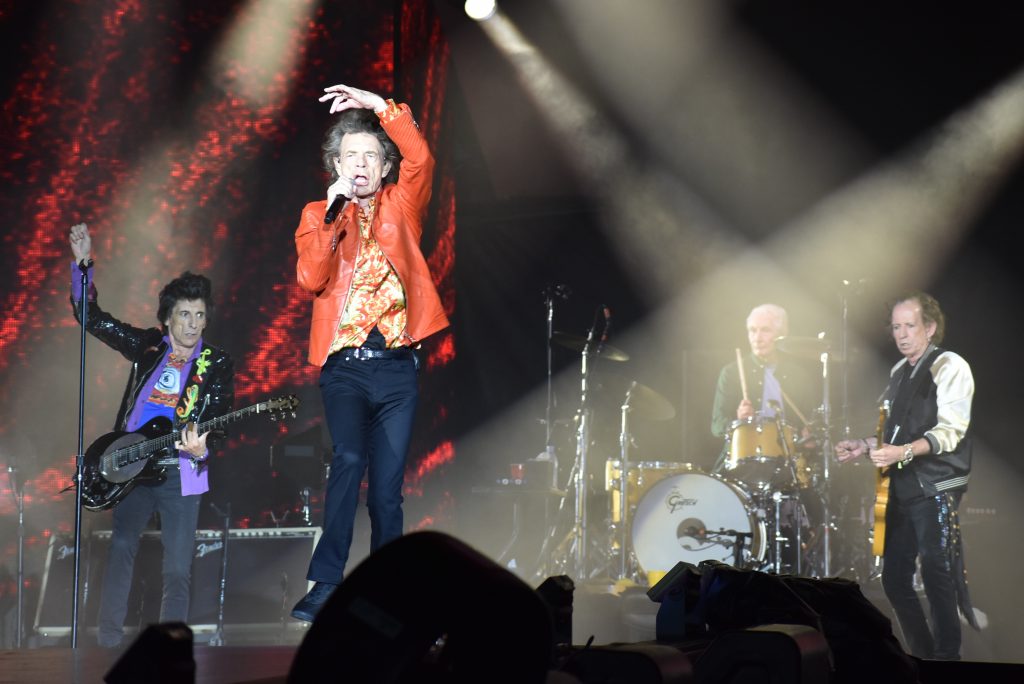 Unless you count a 2016 compilation of blues covers virtually nobody listened to, the Rolling Stones haven’t released an album’s worth of new recorded music since 2005’s underrated LP, A Bigger Bang. As a result, the Rolling Stones have nothing to promote in the year 2019. Despite this, the half-a-century-plus-old rock and roll band – with extra emphasis on the roll – decided to go on tour anyway. Just for the hell of it. They even dubbed it the No Filter Tour, which sounds just like a name somebody came up with because they had to call it something. But why? In a world where almost every other rock band from the ‘60s has either broken up or died, why would these four lads from London continue to put on football stadium-sized rock and roll extravaganzas for tens of thousands of screaming fans?

The answer is revealed when Ron Wood, smack in the middle of “Start Me Up,” thrusts his arms to the sky at fans seated near the left side of the stage, or when Mick Jagger tosses his Strat to a roadie during “Miss You” so he can venture out to the edge of the stage’s catwalk. When Keith Richards, kicking off the show, bursts out from behind the curtains playing the opening chords of “Street Fighting Man,” you see it. Simply put, the guys are having fun. It may only be rock and roll, but they like it. They really, really like it.

And so do you. You like it so much that some of you are willing to pay more than $800 to see them, which is how much some of the highest-priced tickets went for. If you’re Charlie, Ron, Mick or Keith, the money may also be a reason for you to still tour, but let’s be honest; The Rolling Stones are filthy rich, and they don’t need your money. I mean, they’ll take it, but they don’t need it.

All the Stones’ members are now well into their 70s, which means witnessing their live show isn’t what it used to be. Nowadays, the band’s concerts are about seeing a spectacle. A phenomenon. A marvel, if you will. Judging them based on their sheer musical abilities at this age is simply unfair, and one must come to expect to hear Watts lag behind the beat, Ronnie miss a note during a solo, or Keef fall out of time. To be fair, they were never the most technically afoot rock band, even in the ‘60s and ‘70s. If that’s what you’re looking for, Steely Dan is playing the Met on three different dates in November. But this is the Stones we’re talking about – the fall down drunks who had too many sips from your loving cup, the monkey men who always have unmade beds, and the guys with the cocaine eyes and the speed-freak jive. It’s the Stones who invented sloppy-cool, and there’s no turning back now.

You know what I hate about most classic rock shows? People sit down. When ELO played the Wells Fargo Center last August, people sat for half the show. Same goes for the Fleetwood Mac concert in March. But one simply doesn’t *sit down* at a Rolling Stones concert. Jagger, who looks to be in the best shape of anybody in the band despite a recent heart valve replacement surgery in April, milked the crowd like the greatest frontman in the world he is. Even during the brief, two-song acoustic set, which featured both “Angie” and “Dead Flowers,” Jagger had the whole place standing and staring.

Speaking of the setlist, if you’re a Rolling Stones fan who listens to more classic rock radio than vinyl, this setlist was for you. It had all the hits, from “Start Me Up,” to “Brown Sugar” to “Satisfaction” to “You Can’t Always Get What You Want.” Diehards may have been left a smidge disappointed by the lack of deep cuts played. The two songs Richards sung lead on, “Slippin’ Away” and “Before They Make Me Run,” were probably the most obscure of the night and the only two tracks you wouldn’t recognize if you know the Stones only from WMGK. But the very fact that this band still exists and tours gives nobody a right to complain. Given their age, there’s a very real chance this was the last time the Stones will play in Philly. If that ends up being true, last Tuesday night’s concert was about as big of a bang a band could go out on.