For chef Angelo Lutz, opening his critically-acclaimed The Kitchen Consigliere was an opportunity for a second chance.

After his release from federal prison on a mafia-related racketeering conviction, the South Philly native wanted to give back to society the best way he knew how – with Italian Sunday dinners.

But since the opening of his Collingswood restaurant a decade ago, Lutz’s benevolence has spilled beyond his plates of eggplant parmesan.

Although his charitable efforts span from work with the Ronald McDonald House to Philabundance, Lutz has spurred a local philanthropic network in light of a recent tragedy that struck the Mummers community.

“I got blessed and got a second chance and not everyone gets a second chance,” he said. “Not too many people do. I happened to get that second bite at the apple…Then, reality hit me on Jan. 2 of this year.”

Around 1:45 a.m. that morning, a car accident on the 600 block of Packer Avenue claimed the lives of South Philadelphia String Band members Dennis Palandro Jr. and Joseph Ferry along with Ferry’s fiancé Kelly Wiseley.

Having personal ties to the Palandro family, Lutz found himself impelled to take action.

Just one day after the catastrophe, he established a nonprofit corporation through New Jersey called The Palandro-Ferry Memorial Foundation, which provides “monetary scholarships and goodwill” to individuals in need throughout Philadelphia’s Mummers community.

“My whole thing is – as long as I’m able to give back and even if it hurts a little bit, I just do it. I keep giving back to society,” Lutz said. “The Palandro-Ferry Memorial Foundation is everything that drives me…I felt it was just something that I had to do. This tragedy hit the Mummers unbelievably, and it brought the Mummers community together.”

The organization, which was founded alongside members of the Philadelphia Mummers String Band Association, is considered the first of its kind among the Mummers, as funds are not confined to one specific cause but rather distributed wherever there is a need.

“(Lutz) was moved to do something that would keep their memory alive,” said James Donio, publicity director for The Palandro-Ferry Memorial Foundation.

There are no confinements to the organization’s compassion.

The foundation’s reach ranges from hosting benefit events to assisting an individual’s medical costs to provide presents for underprivileged children, as on Monday, Dec. 9, the foundation will host a holiday party for families in need at The Mummers Museum.

The organization is also giving an endowment to the high school alma maters of the three individuals who passed away, including West Catholic Preparatory High School, The Philadelphia High School for Creative and Performing Arts and Clearview Regional High School.

“We’re trying to do something positive out of something that was just unspeakably tragic,” Donio said. “So that the families that lost these three young people will know that as sad as they are and as difficult, in some cases maybe impossible, it is to get past this…In their names, in their memory, good deeds will be done. You can’t really hope for a better mission for an organization.”

On Sunday, Dec. 8, The Kitchen Consigliere is hosting an event in honor of Donio’s new children’s book, “Zane To The Rescue.” Lutz plans to match however much is made during the book signing and then donate the funds directly to The Palandro-Ferry Memorial Foundation.

Lutz, who is a lifetime member and chairman of the 25-member nonprofit, is fusing his other charitable pursuits into The Palandro-Ferry Memorial Foundation.

For the past several years, Lutz, whose cuisine flairs have landed him on Food Network’s “Cutthroat Kitchen” and QVC, has been collaborating with the Ronald McDonald House at Front Street and Erie Avenue.

Lutz says multiple times a year, he donates his food to the organization. Sometimes, string bands even accompany him to serenade the residing families during the suppers.

Earlier this year, Lutz sponsored a room at the Ronald McDonald House, which proudly reads “The Kitchen Consigliere in honor of Denny Palandro Jr., Joseph Ferry and Kelly Wiseley.”

“I wanted to marry that foundation with the Ronald McDonald House,” he said.

On Jan. 2, 2020, the one-year anniversary of the fatal car crash, Lutz says all proceeds made at The Kitchen Consigliere will be gifted to The Palandro-Ferry Memorial Foundation.

Amidst his array of altruism, Lutz continues to cultivate The Kitchen Consigliere brand, which, as he says, is simply comprised of “what my mother and grandmother cooked on Sundays.”

Aside from distributing The Kitchen Consigliere delights in local supermarkets, Lutz says he plans to open a second restaurant by August 2020 in Washington Township.

As Lutz’s business continues to flourish, the impetus to help others simultaneously grows.

“(The Kitchen Consigliere) was just a venture that I took a shot on,” he said. “I’ve been gambling my whole life. I gambled all of myself…I’ve been blessed, hence, my propensity to give back.” 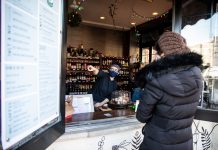