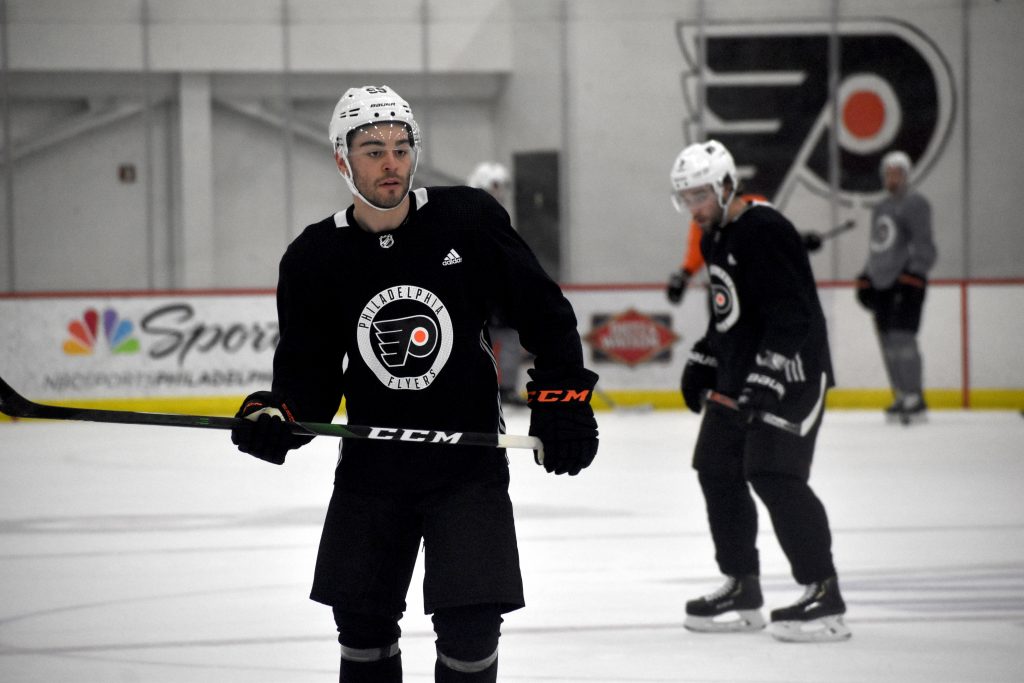 Mark Friedman didn’t have a whole lot of time to think about what he was walking into.

The newly recalled Flyers defenseman finally got the call on Wednesday to play against the Washington Capitals at the Wells Fargo Center later that evening.

After a quick drive from Lehigh Valley, he laced up the skates and helped the Flyers defeat the NHL-leading Capitals 3-2 to snap a four-game losing streak.

Just another day at the office, right?

“I got told Wednesday, the day of the game, that I was coming here to make my season debut,” Friedman said. “That was a little nerve wracking to be honest. But it’s been a lot of fun and I’m just trying to take in everything as much as I can.”

Friedman was told the night before there was a possibility of a call-up but nothing was certain until Phantoms practice the next day.

“(Phantoms Coach Scott Gordon) actually told me in the middle of practice so I didn’t know what was going on until he said that,” Friedman said. “Then I got here and played against the best team in the world so it wasn’t easy.”

Friedman, playing in just his second NHL game and first of the 2019-20 season, was tasked with shutting down the league’s highest scoring team. He came through in flying colors, playing 11:49 and keeping a clean sheet.

“I liked his first game,” Flyers coach Alain Vigneault said of Friedman’s season debut. “He talked about how he was a little nervous before his first game. But I thought for the most part, high-percentage plays, he was good in one-on-ones. When he had an opportunity to support the attack or be part of the forecheck, he was there. A lot of times, when guys are a little nervous, they tend to stay back. He was there. So for a first game with us, I liked his game.”

Friedman will be put to the test again on Saturday as the red hot Tampa Bay Lightning pay a visit to Philadelphia at 7 p.m., riding a nine-game winning streak.

“He played well last game,” Flyers defenseman Ivan Provorov said. “He was solid and kept a good gap and moved the puck well. I think he’s doing well so far and he’s going to continue to get better.”

Friedman, who celebrated his 24th birthday on Christmas, actually slots in as the third-oldest defenseman in the current starting lineup. Provorov, who will turn 23 on Monday, offered some advice.

“Just relax, enjoy it and don’t panic,” Provorov said. “We told him if he has any questions to come talk to the old guys. We will always help.”

Unlike last year, Friedman could be in a position to stay with the big club, at least until Justin Braun and Shayne Gostisbehere return from injuries. Friedman made his NHL debut last season on the last game of the regular season schedule — a 4-3 loss to the Carolina Hurricanes.

This year, he has more to prove in the immediate future.

“Obviously I want to stick around,” Friedman said. “I just want to play my game and soak in as much as I can from the coaches and the guys. It’s about being in the NHL. It’s been my dream as a kid ever since I was 3-years-old to be here and I just want to be here as long as I can.”

Perhaps in those dreams, he was wearing a different color as the Toronto native grew up watching the Maple Leafs. But Friedman praised Philadelphia fans on his early impressions of the fan base.

“These fans here are so passionate,” Friedman said. “They are the best fans in the world. Philly sports fans are the best. Toronto has some good fans but nothing like here.”