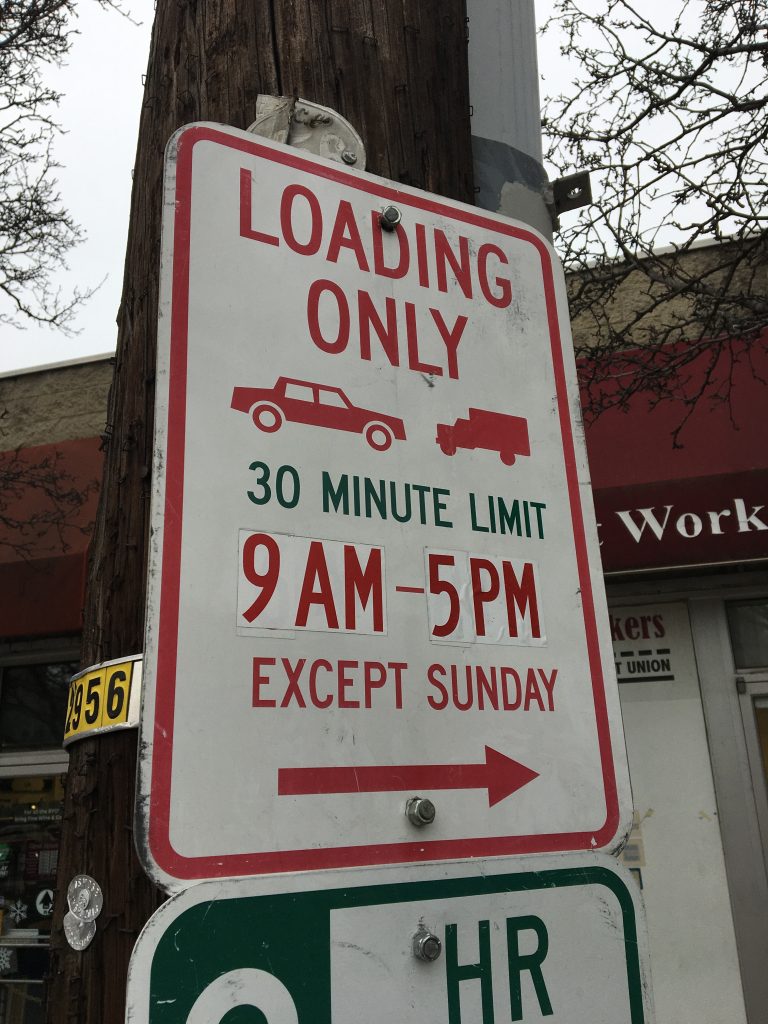 The American economy ain’t what it used to be. With the rise of rideshare apps like Uber and Lyft – combined with the increased presence of delivery trucks thanks to online shopping and Amazon – there are more cars and trucks creating congestion on the streets of American cities than ever before, and Philadelphia is no exception. As a result, you get lots of loading and unloading – not just of packages, but of people, too. According to South of South Neighborhood Association board member Dan McGlone, those deliveries and passenger pickups necessitate more loading zones in his increasingly active neighborhood of Graduate Hospital. For that reason, SOSNA has begun an initiative to have more loading zones placed around the neighborhood.

“The need is really related to congestion – increased deliveries, increasing rideshare,” said McGlone, who noted that he frequently sees Ubers, Lyfts and delivery trucks parking in bike lanes and crosswalks. “This is one of the tools in the toolbox that we have to help kind of solve that problem.”

McGlone said the process to get a loading zone in front of a given business is “pretty long.” First, an application must be submitted to the Philadelphia Parking Authority, which will then conduct a study of the proposed area. After that, the proposal gets filtered through the PPA’s legal team, then over to the streets department, which installs the loading zone signs. The PPA enforces it.

“That whole process is about four to six months in total,” said McGlone. “It’s really long.”

The main impetus for the project is neighbors’ safety. The lack of loading zones creates “an overall dangerous situation for neighborhood residents and travelers alike,” reads a SOSNA blog post on its website.

McGlone said the initial spark for the initiative was a bill passed by City Council last year that waved the $500 application fee businesses have to pay for a loading zone if the proposed loading zone was on a street with a bike lane. For this reason, McGlone is mostly targeting businesses along 22nd street since it already has a bike lane.

When asked if SOSNA is dealing directly with local businesses in the area or directly with the city, McGlone said it’s a little bit of both.

“We’re going to the businesses and we’re saying, hey, if you’re on 22nd Street, you can get a free loading zone,” he said, noting that SOSNA will draft the application on the business’s behalf. In order to do that, the organization collects information about what size trucks deliver to the businesses and what time of the day or day of the week they deliver. Then they get the business owner to sign off on it. But after that SOSNA handles it the rest of the way.

“I think that really has been successful so far because business owners just want to run their business successfully,” said McGlone. “So we have been taking the interaction and coordination with the city off of their hands, and I think that that has been a pretty successful model.”

So far, SOSNA has gotten only one loading zone installed. It’s in front of the CVS at the corner of 22nd and South.

“We heard from CVS that the truck driver often has to park in the bike lane to load because of the lack of available loading space nearby,” the blog post reads.

But of course, more loading zones means less of something else, and that’s parking spots for residents.

“I think the need for parking is tough,” said McGlone, who said that only one resident has complained so far. “It’s definitely an issue, but when it comes down to it, a plurality of people in the neighborhood don’t commute by car. Most people in the neighborhood don’t need their car every day and so I think people are understanding that this is an issue.”

While McGlone understands that some people might be put off at decreasing the already slim supply of parking in the area, he’s adamant that safety comes first.

“We’re all pedestrians at some point,” he said. “[Many] of the reasons we live in our neighborhood is because of its proximity to Center City, because we’re near shops and restaurants and because it’s so walkable…It benefits everybody.”