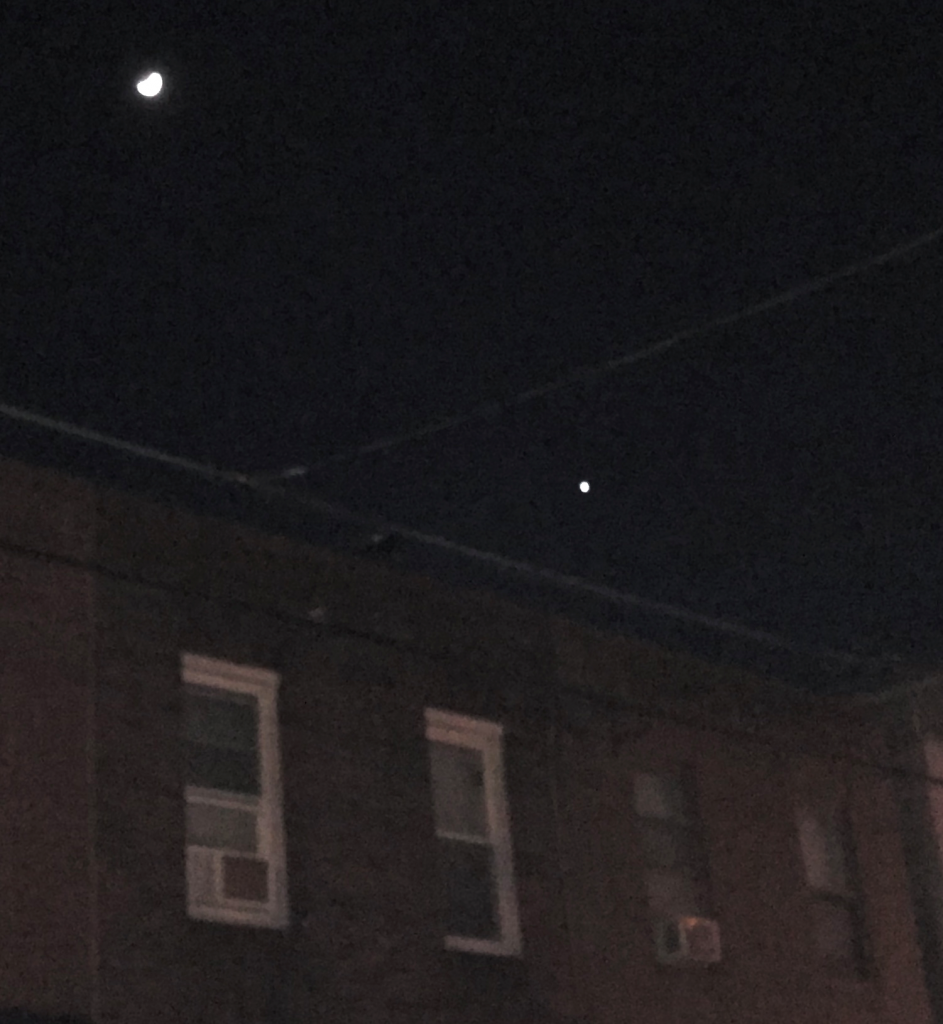 Above is a photo, taken on Jan. 29, of the brilliant planet Venus in the dark southwestern sky over my Passyunk Crossing street. First of all, I am not an astronomer, but I did teach science in grade school for years. One of our topics was the solar system. I know Venus when I see her. She is the easiest of the planets to observe with the naked eye.

Also, during that time, as a volunteer Latin teacher, I taught the students a cleaned-up version of the mythology behind the Roman names of the planets. They represent basically a dysfunctional family. According to the ancient Romans, the earth goddess, Gaia or Terra, and the sky god Uranus became divine grandparents. Uranus ruled the universe. One of their offspring was the Titan Saturnus {Saturn}. Using a powerful scythe, Saturn defeated his father Uranus and took power over the universe. The Romans celebrated his feast, “Saturnalia,” in late December. The figure of old Father Time carrying a scythe is actually a depiction of Saturn.

Saturn was afraid his own children would do the same to him that he did to his father, so he swallowed them as soon as they were born. When Jupiter was born, his mother Rhea was determined to save him. So she covered a rock in a baby blanket and gave it to Saturn to eat. Meanwhile, baby Jupiter was raised in secret by nymphs who fed him the nectar of the gods from a cornucopia {horn of plenty}. He grew up and easily overpowered his father. One version of the story is that their mother first gave Saturn something to make him throw up the children who joined their brother in the defeat of Daddy. Another version has Jupiter cutting him open and releasing his undigested brothers and sisters. As a teacher of young children, of course, I left out the gory details.

So Jupiter took over as Ruler of the Universe. He made his sister, Juno, Queen of the Gods. He put his brother Neptune in charge of the sea and horses. Then he appointed his brother, Pluto, god of the underworld. I know we do not recognize Pluto anymore as a planet, but at the time the name fit a cold, dark and lifeless world. At least Jupiter did not try to kill his children. He later became the father of speedy messenger Mercury, war god Mars and magnificent Venus. So the order of the planets from the closest to the sun remains: Mercury, Venus, Earth, Mars, Jupiter, Saturn….and a dwarf world called Pluto.

Venus is the brightest and closest of all the planets to earth. The story of her birth is fascinating. The ancients believed she was born from sea foam. I understand why. Years ago, I was visiting Long Beach Island, New Jersey with my husband Stanley. One cloudless evening, we were sitting at an outdoor bar next to the beach. Suddenly, I saw what looked like a bright star or tiny moon rising from the ocean. It rose slowly into the black sky. I turned to the bartender, who also happened to be a teacher, and asked, “Is that what I think it is?” He answered, “Yes, that’s Venus.” So I had the wonderful pleasure of observing Venus, goddess of love and beauty, rising from the sea – a vision that has inspired artists and storytellers for ages.

Since about the middle of January, Venus has been rising over South Philly. We have had many cloudy nights when she has not been visible, but on that clear evening, she was there in our western sky in all her beauty and brilliance. She usually follows the sun, so she is in the east in the morning and in the west around sunset. Poetically, the words for Friday in the romance languages: French {Vendredi}, Italian {Venerdi} and Spanish {Viernes) honor Venus. But I will be looking for her on any clear evening all week long.

The Difference Between Yams and Sweet Potatoes

Chicooch and the Iron Man