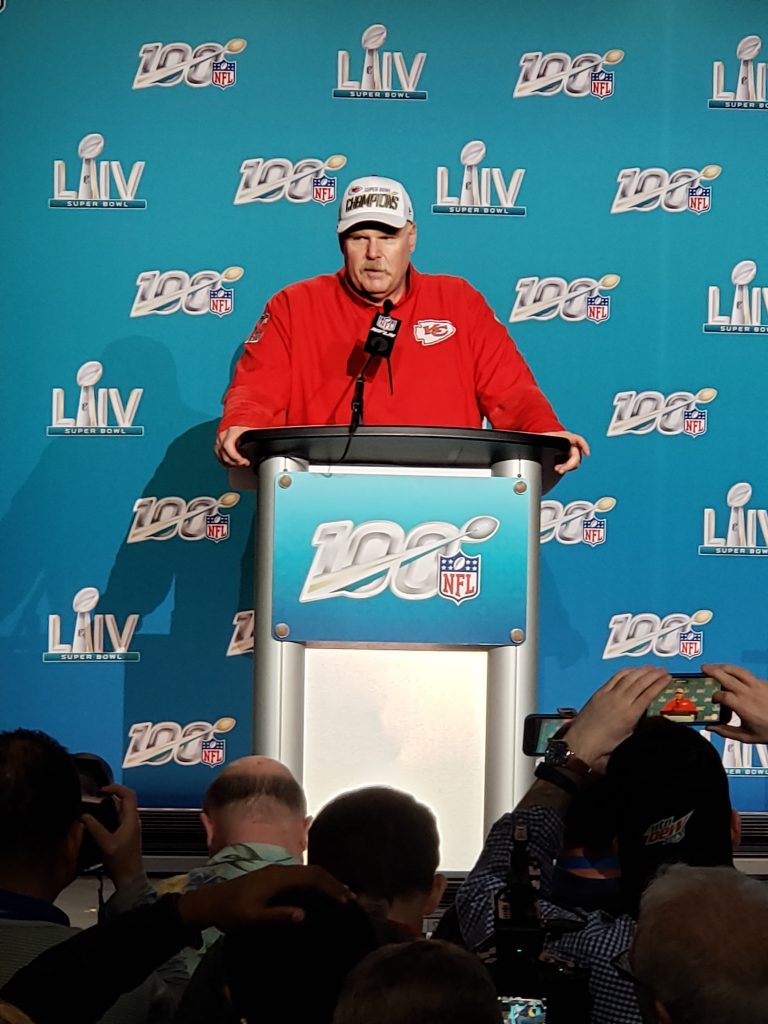 MIAMI GARDENS, Fla. – When Kansas City Chiefs running back Damien Williams bolted around the left corner of the San Francisco 49ers defense and raced 38 yards for a touchdown with 1:12 left in the fourth quarter, expanding the Chiefs lead to 31-20, Super Bowl LIV was decided.

Andy Reid was going to win his first NFL championship as a head coach.

It was a 21-year odyssey that included 14 seasons of near misses in Philadelphia; Reid had finally grabbed the brass ring. Was there a moment after Williams’ touchdown where Reid let it all sink in? Big Red said he didn’t get a chance.

“You know what? The guys were jumping on top me, I got an ice bath, I didn’t have a lot of time to reflect on anything,” Reid said after the game. “Other than keeping guys off the field, we still had a minute left to go, so anything can happen. But it was awesome. Just to be able to celebrate with the guys who worked so hard to get you to this spot, really get the team to this spot, to see how excited they were. These guys were out of their minds. I can’t wait till I get with them and be able to get to enjoy that part.”

It took 21 years, but Big Red finally got it done. His Chiefs defeated the 49ers at Hard Rock Stadium in Miami. Quarterback Patrick Mahomes led a fourth-quarter comeback scoring 21 points in the final segment, erasing a 20-10 lead with 8:53 left in the fourth.

The 24-year-old did not play well for the first three quarters throwing two interceptions and fumbling once. Mahomes finished 26-of-42 for 286 yards and two touchdown passes. The third-year signal-caller was sacked four times, rushed nine times for 29 yards and scored a touchdown.

Mahomes was not shy when asked to talk about his head coach.

“It was amazing. It really was,” Mahomes said at his postgame news conference. “I had two goals when I became the starting quarterback for the Kansas City Chiefs, and the first goal was to win the Lamar Hunt Trophy. I wanted to bring it home, the one that has our founder’s name on it. I wanted to bring it to this family and this organization. And the second most important thing was to get Coach Reid a Super Bowl trophy. He’s one of the greatest coaches of all time. I don’t think he needed the Lombardi Trophy to prove that. But just to do that, it puts all doubt aside, and he’s going to be listed as one of the all-time great coaches in history whenever he wants to be done, which I hope is not anytime soon.”

“That never crossed my mind,” he said. “I’ve been through it the last couple three weeks here. I just felt like we got it straightened out. When you kind of find that accelerator, for a series or two, we’d be OK. We were able to find that on both sides of the ball. And then special teams did a great job of making them drive along the field. It was an all-around team effort.”

Reid coached the Eagles for 14 seasons. He led the Birds to six NFC East titles, six trips to the NFC championship game, winning one that qualified the Eagles to their only Super Bowl appearance during Reid’s tenure. The Eagles lost to New England, 24-21, in Super Bowl XXXIX.

Reid was asked to comment on all the Philadelphia fans and former Eagles players who were rooting for him to finally win the Lombardi Trophy.

“I loved my time in Philadelphia,” Reid said. “Phenomenal players there. We were so close so many times. My heart went out to those guys. If there’s one thing that hurt, it was for the Luries and the players. This is a pure team effort. I’m happy for them. They have a little piece of all of this. And then for the Eagles to do what they did a couple years back with Doug (Pederson), that’s a special city. They’ve had some great players there. It’s great to see them still involved with the city. Again, I appreciate it. It’s humbling to think about all that. I do appreciate every bit of it.”

It only seemed appropriate for Mahomes to be asked a second time how he feels about Reid getting his first ring as a head coach and cementing his eventual induction to the Hall of Fame.

“Like I said earlier, he’s one of the best coaches of all time,” the 2018 league MVP said. “He already was before we won this game, but we wanted to get that trophy just because he deserved it. The work that he puts in day-in and day-out, he’s there at like 3 in the morning, and he leaves at 11. I don’t think he sleeps. I’ve tried to beat him in, and I never can. He’s someone that works harder than anyone I’ve ever known, and he deserves it. I’m glad we were able to go out there and get that trophy for him.”