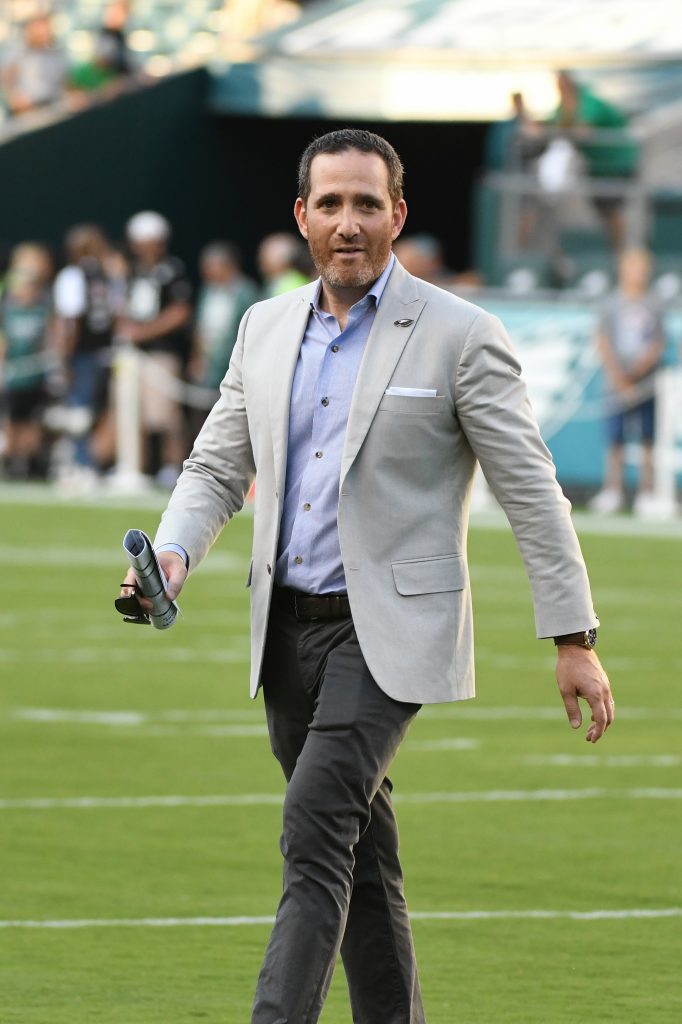 For the last three seasons, the Eagles have suffered an inordinate number of injuries to virtually every position on the field.

In 2018, virtually the entire starting defensive backfield was out for most of the season. So were most of the running backs, as well as Wentz again.

The Eagles have turned over their medical and training staffs every year during this span.

In his end-of-the-season news conference in January, Vice President/General Manager Howie Roseman stated the Birds were going to get to the bottom of the team’s injury issues and turn it around.

“We have hired a new chief medical officer,” said Roseman, referring to Dr. Arsh Dhanota. “This is someone that we are very, very excited to have. He came in in June and what he asked for us was that he would observe, observe through the season, observe our training staff, observe our weight staff, our sports science, our processes, and make recommendations to us that we would carry out. So we’re excited about that.”

At this year’s Pro Bowl, center Jason Kelce praised the Eagles front office for its resolve to make the Eagles one of the blue blood sports franchises in the world.

“I’m not going to pretend like I’m an expert in that field,” Kelce said after one of the workout sessions at ESPN Wild World of Sports in Kissimmee, Florida, in January. “I think the Eagles are a first-class organization. They’re always looking to get better. The part of this are the people I care deeply about, that I have great relationships with… I’m just kind of waiting to hear what happens with everything. But it’s just part of the business, especially with an organization like Philadelphia, that’s always trying to get better, always trying to be the best, there’s going to be change.”

Kelce let it out that he’s almost certainly returning for a 10th season when he was asked if he was excited to be playing for a new offensive coaching staff before players report for offseason training this spring.

“I’m always looking forward to working with anybody, to be honest with you,” Kelce said. “With new coaches, it could be better, could be worse. One thing that’s guaranteed is there will be a new perspective. You’re going to get a few tips that you really haven’t thought of in the same way. For me, selfishly, I may be able to gain something like that. I can tell you right now I am going to miss Mike (Groh). I’m going to miss all the guys that are not going to be there. They were phenomenal for us.”

Below are two of the top new changes in the area of sports medicine and training.

Tom Hunkele joins the Eagles as the team’s director of sports medicine after spending the last 14 seasons with the Minnesota Vikings, where he served as the coordinator of rehabilitation/assistant athletic trainer. In his role with the Vikings, Hunkele assisted in the evaluation and care of all injuries sustained and helped to implement proactive treatment and rehabilitation programs.

This will mark Hunkele’s second stint in Philadelphia, as he worked with the NovaCare Rehabilitation staff from 2000 to 2005. During that stretch, Hunkele served as a physical therapist in the offseason and as an assistant to the trainers from the preseason through the end of the season.

A native of Reading, Hunkele graduated from Duquesne University in 1998 with a bachelor’s degree in athletic training and remained at the school to earn his master’s in physical therapy while serving as a graduate assistant to the head athletic trainer.

Ted Rath has been hired by the Eagles as the team’s director of sports performance and brings 11 years of NFL experience to Philadelphia. Most recently, Rath spent the last three seasons with the Los Angeles Rams, beginning his stint with the Rams in 2017 as the team’s head strength and conditioning coach before being promoted to director of strength training and performance in 2018.

In 2017, Rath was named the Strength Coach of the Year by the Professional Football Strength and Conditioning Coaches Association, an award voted on by strength and conditioning coaches around the NFL. That season, according to Football Outsiders, the Rams finished as the healthiest team in the NFL based on adjusted games lost due to injury.

Prior to his time in Los Angeles, Rath spent one season as the assistant strength and conditioning coach for the Miami Dolphins (2016) and seven seasons in the same role with the Detroit Lions (2009-15).

Rath played linebacker at the University of Toledo from 2003 to 2006 and went on to serve as the assistant director of strength and conditioning at his alma mater in 2008 before entering the NFL. ••