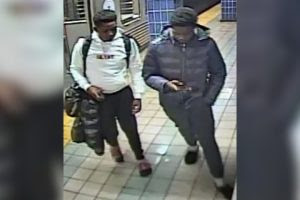 Police are looking for robbery suspects who they say have committed multiple crimes.

On Feb. 4, at approximately 11 p.m., two unknown black males were captured on surveillance video stalking a 19-year-old victim on the 1500 block of Broad Street. After turning onto the 1400 block of Tasker Street the suspects attacked and robbed the victim, taking his wallet, which contained $200, police said.

Two days later, at approximately 10:45 a.m., police say the two unknown males were captured on surveillance video stalking a 19-year-old male at the Ellsworth-Federal station of the subway. While waiting for the train, the suspects attacked and robbed the victim of his AirPods, police said.