The Flyers didn’t sit still on Monday as the NHL trade deadline came and went. The Flyers bolstered their roster with two acquisitions, bringing in a pair of journeyman forwards in 29-year-old Derek Grant and 35-year-old Nate Thompson.
Grant was traded for Kyle Criscuolo and a 2020 fourth-round pick. Thompson arrives in exchange for a 2021 fifth-round pick.
Those acquisitions by management sent a message to the players that they believe. Exactly what they believe in is a little trickier to dissect.
On one hand, it appears General Manager Chuck Fletcher believes the Flyers can make some noise in the playoffs, and made these depth moves to gear up for what he hopes is a long run.
On the other hand, the moves signify that the Flyers forward group wasn’t as strong as the other top teams in the Eastern Conference, despite overachieving for most of the season.
“We liked our team before today,” Fletcher said. “Our players have earned the right not only to have some additions at the trade deadline but also to keep their roles. We weren’t looking to overhaul our team. We weren’t looking to make dramatic changes … This was more about depth, character, experience and specific roles.”
Rewarding a team by bringing in reinforcements is one way of looking at it. Breaking up the chemistry of a tight-knit team without the addition of a superstar is another.
Flyers coach Alain Vigneault leans to the former.
“I believe we are helping the chemistry,” Vigneault said after practice on Monday. “This is a move that, a lot of the guys have been here for a while have wanted the organization to step forward and show confidence and show faith and that’s definitely what we’re doing.” Both Thompson and Grant are on expiring contracts, and cheap ones at that. Thompson carries a $1 million cap hit while Grant makes the veteran minimum at $700,000.
In 49 games this year with Anaheim, Grant has scored 14 goals and added six assists, accounting for nearly a third of his career points (65), which was accumulated over 257 games.
He will join his seventh NHL team once he suits up for a game for the Flyers. He has played in just four career playoff games.
Projected to center the fourth line, Thompson will join his eighth NHL team upon joining the Flyers. He scored four of his 62 career goals with Montreal Canadiens this year and has suited up for 62 career playoff games since his debut in the 2006-07 season. He has reached the conference finals three times in his career, twice with the Ducks and once with the Tampa Bay Lightning.
“I think we’re pretty comfortable with the group we have,” Flyers forward Sean Couturier said. “But bringing in some experience always helps. You can’t have enough experience down the road. Thompson has been around for quite a bit and he’s a good face-off guy, strong, and pretty disciplined in the way he plays. Grant is pretty similar, too. They’re two guys who will definitely help us down the road and it’s nice to see the confidence from management and it’s up to us to go out there and do our job and keep winning games keep pushing to be the best we can be.”
With two guys coming in, two must head out.
Connor Bunnaman and Joel Farabee were sent down to the Lehigh Valley Phantoms after practice on Monday. 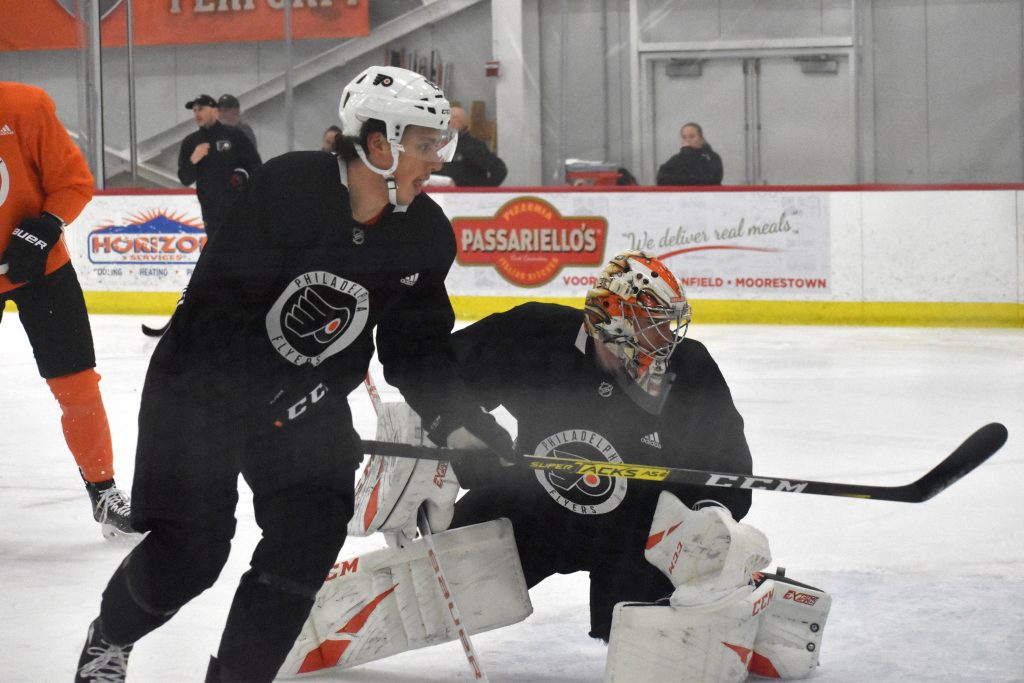 Bunnaman was an unfortunate odd man out after performing well on the fourth line with Nicolas Aube-Kubel and Michael Raffl.
“Connor has been a real good player for us,” Vigneault said. “He’s played hard. He’s just a young player, just scratching the surface. As far as potential, he needs to put it all together but he’s definitely got the size and the skating ability and with more games, he’ll only get better.”
Farabee, the Flyers 2018 first-round pick, has seven goals and 13 assists in 49 games this season. Fletcher believes more seasoning with the Phantoms will help grow Farabee’s game.
“I just want to make sure we’re giving Joel every opportunity to be the player he can become,” Fletcher said. “He’s played fine and I have no doubt he will be part of our group again, maybe even in the near future … We can’t forget, he’s 19 years old. Joel has been a real big part of our team this year and he’s even a bigger part of our future.”
The decisions are tough, but overall, the Flyers are in a much more envious position than they were a year ago, when they traded Wayne Simmonds to the Nashville Predators.
“Overall it’s a way better feeling when you’re winning and everybody enjoys it a little more,” Flyers forward Michael Raffl said. “It’s way more fun. It means you have a better chance of winning and that’s the ultimate goal of everybody in here is a chance to win. It’s exciting times.”

(This story was edited to add quotes from General Manager Chuck Fletcher).