Residents, police and elected officials convened last week at Shiloh Baptist Church on Christian Street to discuss the topic of gun violence in relation to a recent daytime shooting in the Graduate Hospital neighborhood of South Philadelphia.

The meeting was organized by City Councilman Kenyatta Johnson, who lives in South Philadelphia and represents the 2nd District, covering parts of Center City, South Philly and Southwest Philly, and is the chairman of the Special Committee on Gun Violence Prevention.

“This last shooting took place in broad daylight about 1 o’clock in the afternoon outside a park that is frequented by young people,” Johnson said. “For me, that type of behavior is totally unacceptable. So we are taking a comprehensive approach when it comes to addressing the issue of gun violence.”

The shooting occurred on March 5, as three gunmen jumped out of cars and chased 21-year-old Kahil Williams-Husky down Carpenter Street and fatally shot him near the intersection of 22nd and Montrose streets, adjacent to Julian Abele Park.

The incident was captured on surveillance footage, and the homicide is still under investigation, according to Capt. Michael O’Donnell of the 17th District.

“We’re still investigating, so we can’t get too deep into that,” O’Donnell said. “It is a homicide investigation that is very sensitive in nature but we have a lot of video that we’re going into, and the captain of South Detectives has some patrol alerts. They have a vehicle that they captured in the video as well as some pictures of the offenders, and we are looking for them.”

The shooting has the community shaken, as it occurred in broad daylight during school hours. Johnson said it involves gang violence that has plagued the area for years. 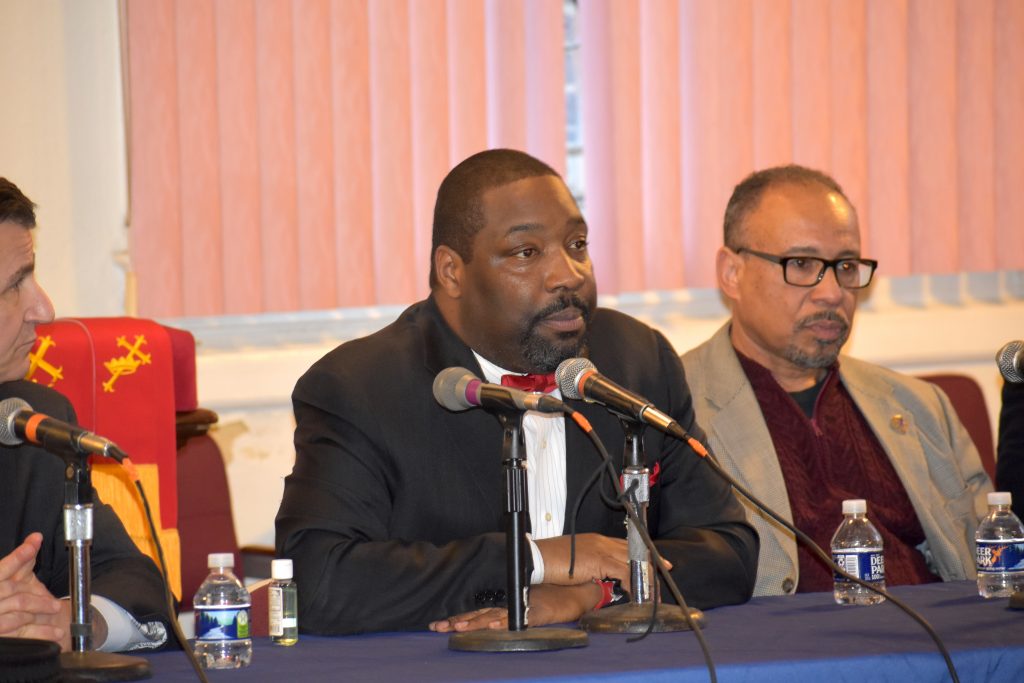 “A lot of these back-and-forth shootings over the past several months have really revolved around two different groups of individuals that live on different sides of Washington Avenue. It’s totally nonsense at the end of the day.”

Johnson says he plans to advocate for more funding for the detectives division at the city level. State Sen. Larry Farnese (D-1st dist.) said he would advocate for legislation at the state level.

“We need to give law enforcement more than just cars and bullets and vests,” Farnese said. “We need to give them the legislative options they need to put these idiots behind bars right now and get these guys off the streets.”

The town hall was held on March 10 and at that time, 68 homicides had been committed in Philadelphia in 2020. The number has risen to 79 through Sunday, including the tragic death of on-duty SWAT officer Cpl. James O’Connor, who was shot and killed while attempting to serve a homicide warrant in the Frankford section of the city on Friday.

Through Sunday, homicides in 2020 were up 23 percent from last year and the most to date since 2007.

“My first priority is neighborhood safety,” Johnson said. “When I walk down the street, most folks won’t know, especially this generation, that I’m a council person. I walk with my two sons and my wife. They don’t know I’m an elected official so bullets don’t have any names on them. I’m just as vulnerable as the next person inside of this room.”