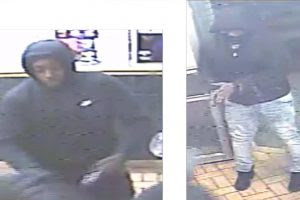 Police are offering a $20,000 reward for information leading to the arrest and conviction of a pair of suspects wanted for a January fatal shooting that occurred near S. 20th Street and West Snyder Avenue.

The homicide occurred in the Philadelphia Police’s 1st District on Jan. 15 at approximately 6:49 p.m. when police say a 23-year-old man was shot in the head and face while ordering food at a Chinese restaurant. He was transported to Jefferson Hospital, where he later died from his injuries.

Police describe the suspects as two unknown black males, about 20 years old, and they arrived in a light color sedan.