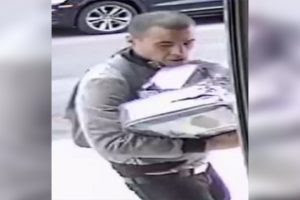 Police are looking for a suspect who was captured on surveillance video taking packages from an apartment building on the 700 block of S. 12th Street on March 10.

Anyone with information about this crime or this suspect is asked to contact South Detective Division at 215-686-3013/3014.