Courtney Powers knows how important it can be to have music available at your fingertips. In fact, she could probably write a song about it.

The South Philadelphia High School music director took matters into her own hands after schools closed down in hopes of containing the spread of COVID-19.

Powers received permission from school officials to go to the school and rescue musical instruments from the band room and deliver them — from a distance, of course — to students to play while classes are suspended.

“I needed to get a couple of things from the school anyway,” Powers said. “I figured if I have one trip, let me put this out there to the kids and see if anyone wants any instruments. And they replied back.”

Powers received permission from the school’s principal and was allowed entrance by the building manager, who helped Powers with her mission. Both wore masks and gloves and sanitized the instruments before loading them into Powers’ car.

The next step was driving around South Philadelphia to deliver instruments to about a dozen students. Powers carted around a small orchestra, including guitars, piano keyboards, computers, midi keyboards and a drum set. And delivered them with a smile.

“I waited outside with the instruments,” she said. “They came out and got it. I waved at them. Took a picture from afar and got to talk to them. But it was really weird seeing students and not being able to hug them.”

Powers has quickly formed bonds with students in her first year at South Philadelphia High School. Originally from the small town of Leon, Kansas (population 704), Powers has taught music to kids in urban schools in Massachusetts and Texas before teaching at various schools in and around Philadelphia.

She plays more than 10 instruments herself, and she remembers what it was like when music was taken away from her when she was in high school during a national tragedy.

“My senior year of high school was when 9/11 happened,” Powers said. “The world kind of shut down, but it didn’t shut down like this. I had a band trip that was canceled because of security and I threw a fit about it because I didn’t understand. I think a lot of kids are seeing that aspect of it, too, because they don’t understand. They can’t.”

It helped Powers realize the importance of putting instruments in the possession of young, developing minds.

“These are high schoolers, so if they’re really motivated to do something, they will,” Powers said. “We have to look at the students, as they are going to be taking control of education.”

Last year, Powers was notified of the honor of being one of 25 quarterfinalists of more than 3,000 entries for the 2020 Music Educator Award, presented by Recording Academy and Grammy Museum.

Music has always been an escape for Powers and she wanted to make that available to her students, whether classes were in session or not.

“Kids have everyday responsibilities and school is sometimes an escape for them,” Powers said. “And this took away that safe sanctuary. Sometimes we forget that in this city, we have a lot of kids that don’t want to go home. But at least if they have some music there, it might help them to escape and create on their own terms and learn what they want to learn.”

Powers has continued to provide that escape. Through social media, she posts live Instagram videos where she can interact with students.

“We’re able to take song suggestions, answer questions and be silly for them,” Powers said. “They can escape from their parents freaking out or everybody else freaking out with what’s going on. Parents sometimes dump as much as they can on them because they think they’re adults and they can handle it. But they can’t. They’re only mini adults and they need some help.” 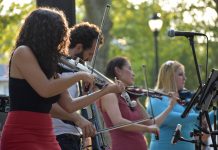