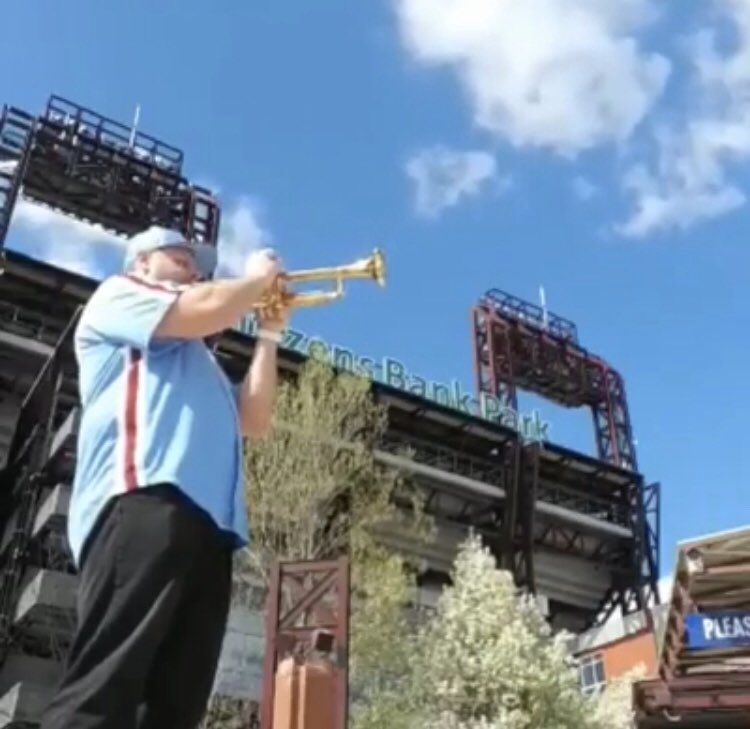 Darren Lynch is used to walking to the stadium for baseball season’s Opening Day.

Living just a few blocks from the South Philadelphia Sports Complex, Lynch is used to weaving in and out crowds on Pattison Avenue while sniffing the intensifying aroma of hot dogs and popcorn as he approaches the gate.

His walk on Thursday was much different.

The Phillies’ home opener against the Milwaukee Brewers was postponed, just as every Major League Baseball game has been suspended due to the COVID-19 pandemic. But Lynch went to the park anyway. And the 15-year School District of Philadelphia music teacher brought his trusty trumpet and played the national anthem in the shadows of the empty stadium.

“With all the support for the people out there, working to keep us safe, what better represents us than the flag and the Star-Spangled Banner?” Lynch said. “And that’s a big deal on Opening Day, getting there early and taking part in the festivities leading up to the national anthem. I thought to myself, there’s not going to be an anthem at the ballpark so maybe I’ll go over there and play to the empty stadium.”

Lynch has been in the stands at every Opening Day in Philadelphia since 2001, only missing in 2004 due to high ticket prices when a sold-out Citizens Bank Park first opened.

“I still have most of my ticket stubs from Opening Day,” he said. “But I did lose a few along the way.”

But he will always have the memories. There was no ticket stub to be had the other time Lynch played his trumpet outside the stadiums. It was in 2003 after the implosion of the Phillies’ old home — Veterans Stadium.

“When they imploded the Vet, I walked over to 10th and Packer and watched with everyone else,” Lynch said. “When it finished coming down, I played ‘Taps’ on my horn. So this is twice now that, I guess, I’m making the news for playing my trumpet for baseball-related things.”

Lynch is quite well known for his musical ability. He teaches a rotation schedule at five different schools in Philadelphia, including South Philadelphia’s Girard Academic Music Program (GAMP) on Ritner Street, and Meredith Elementary School on 5th Street. He also travels to Baldi Middle School and Joseph H. Brown Elementary School in Northeast Philadelphia as well as Central High School. 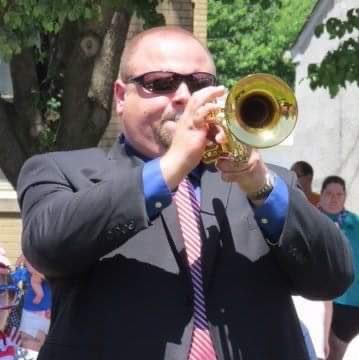 In addition, Lynch is a professional musician, who plays in a wedding band called “Rio”, which is under the umbrella of Events Beyond Expectation, better known as EBE. He said booking gigs has been tough in the current situation.

“We’re usually busy most weekends and as a professional musician, you need to take whatever work comes your way,” he said. “But we’re all out of work right now.”

Weddings have been moved to later dates, celebratory events have been canceled, and Citizens Bank Park’s parking lots that were scheduled to host thousands of tailgaters on a chilly spring afternoon have been converted into drive-though COVID-19 testing sites for healthcare workers.

“All the white tents are set up there and you see some cars driving by,” Lynch said. “And you feel for those people in those cars because they’re probably showing some signs or symptoms.”

Lynch described the normally busy Pattison Avenue as “a ghost town,” with just a few cars driving by. He’s hoping soon there will be some normalcy, and baseball.

“I remain hopeful that there will be some sort of shortened (baseball) season,” Lynch said. “And we will get to see some baseball soon.”

And hear the national anthem beforehand.