Ralph and Rickey Sciulli are just hoping to make a small impact on the local community they’ve been a part of most of their lives.

As South Philadelphia business owners for more than 50 years, the two brothers will be giving away 100 free gallons of milk on Saturday to help families navigate the tough economic times that the COVID-19 pandemic has brought to the area.

“We decided it’s the best thing for the children,” said Rickey Sciulli. “We’re just hoping to see a few smiles. I think we will.”

Milk will be available at the Double-0-Seven convenience store at the corner of 7th Street and Oregon Avenue on Saturday starting at 1 p.m. until supplies run out.

The Sciulli brothers have owned the small store for about 36 years but they began their business together by opening a pizza shop at Taney and Tasker streets almost exactly 53 years ago. Friday is the anniversary of the original business venture, according to Rickey Sciulli. He was 12 years old when he came to the United States from Italy with Ralph, who was 15 at the time. It didn’t take long for them to start running a business.

Rickey said the milk supplier discounted prices by a dollar a gallon to help make the donation more affordable for the business owners. The delivery is set to come in on Friday and they’ll begin handing out 1 gallon per family on Saturday. They will use precautions in relation to social distancing, as they are asking residents to wait outside 6 feet apart until there is room in the store for shoppers.

“Keep a distance from others,” he said. “When they come in the front of the store, Ralph and Rickey will be handing out gallons of milk. We’re just asking that people please respect one another and try to keep the right distance.”

It’s not the first time the two brothers attempted to help out the community. Rickey said in 1983, they used their pizza shop to help out residents.

“Back in 1983 when things were pretty rough, we’d sell pizzas for $3,” he recalled. “People would buy two pizzas. One for Wednesday and one for Friday. People went crazy for it. They used to line up outside.”

This time, it’s just about getting the necessities in the right hands.

“We just want to give back with this kind of crisis,” Sciulli said. “Hopefully, it helps.” 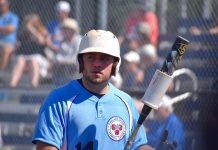