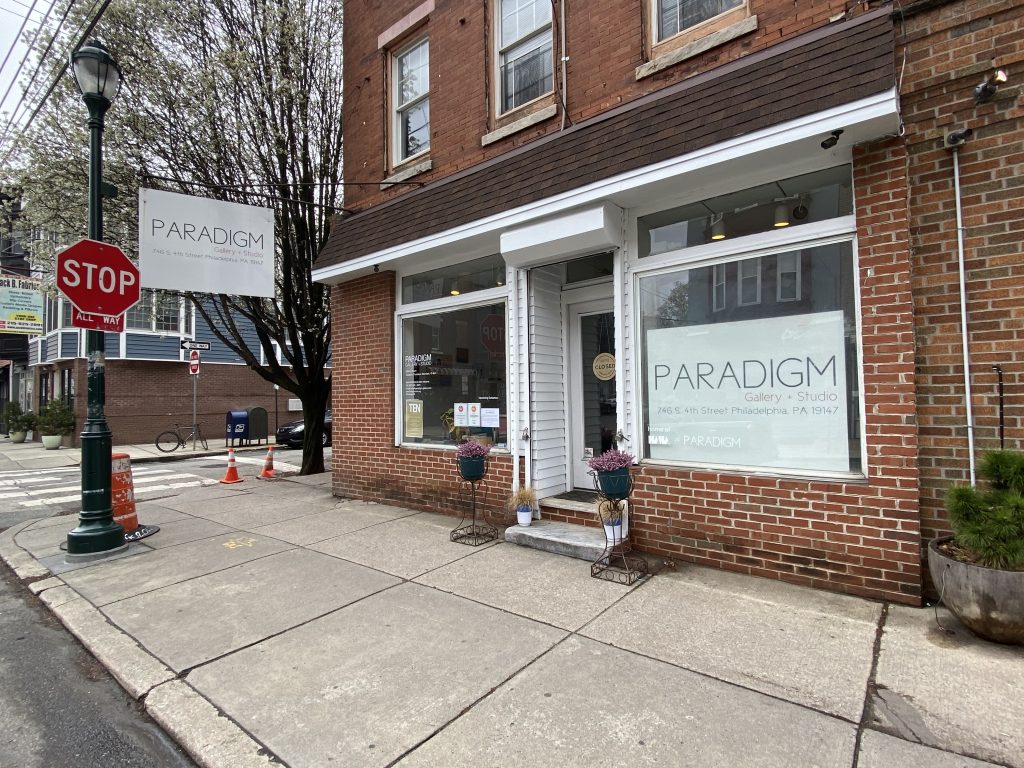 Like seemingly most businesses in the coronavirus economy, Paradigm Gallery + Studio has been forced to sub-out its standard business practices for a more virtual form attracting customers. Being the inventive entrepreneurs they are, Paradigm co-founders Jason Chen and Sara McCorriston have continued to find ways to remake the world of selling art. Paradigm’s latest initiative, Insider Picks, is their most recent way of doing that.

“I’ve been experiencing that feeling of wanting to support so many people and places – everything from other small businesses to artists to charity organizations,” McCorriston said. “I wanted to come up with something we could do that brought all of that together in one place.”

What McCorriston and Chen came up with was a weekly virtual exhibition curated by people from the Paradigm community. The first exhibitions, which went up on Paradigm’s website last week, featured curated selections from Robert Perry, owner of Tattooed Mom on South Street, and Ekaterina Popova, owner of Create! Magazine. This week’s exhibition, which went up Tuesday, was selected by Shannon Maldonado, founder of Yowie, a Queen Village-based home and life shop. Maldonado’s exhibition features pieces such as Drew Leshko’s Apollo Theater, which is a 1:12 scale miniature replica of the legendary Manhattan theater’s large vertical projecting sign. It also features Joey Bates’ Explosion #11 and Jessica Brilli’s 11am.

“I’ve been a fan of Drew Leshko’s miniatures for a while and attended one of the best concerts of my life at the Apollo Theater in New York,” said Maldonado, referring to seeing hip-hop/rock act Gorillaz on their Demon Days tour in April 2006. “His mini marquee immediately brought me back to that memory. Joey Bates’ Explosion #11 features this great balance of strength and fragility … Jessica Brilli’s 11am has a cinematic quality about it. I looked at this painting and started asking questions: Who are the drivers of these cars? Why have they stopped and where are they going?”

A new exhibition will go up each week on the website, paradigmarts.org, and each will have a portion of its proceeds donated to a charity of the curators’ choice. Maldonado picked The Garces Foundation, an immigrants’ rights organization, as her charity of choice.

“I was fortunate enough to attend an event in their honor at The Deacon and was inspired by the community they serve and their mission,” Maldonado said of The Garces Foundation in an email to SPR. “The Garces Foundation is committed to helping South Philadelphia’s underserved immigrant community get access to healthcare and educational services.”

Part of the proceeds from Perry and Popova’s exhibition will go toward The Sunday Love Project, an organization that feeds homeless citizens of Philadelphia.

“Millions of Americans are affected by the current situation, but those who are already struggling need additional support right now,” said Popova. “The Sunday Love Project serves between 600 and 800 meals to those in need in Philadelphia, and I hope the contributions from this initiative will help continue this service.”

“The folks at Sunday Love,” added Perry, “have been doing phenomenal work feeding some of our most vulnerable community members since 2014. And Sunday Love is more than a much-needed meal. They provide connection and community to those they serve. In this time of crisis, their work is more vital than ever.”

Perry’s selections consisted of work by local artists such as Leshko, Lauren Rinaldi and Bines, a well-known sticker artist in the city.

“The hardest part was limiting it to just a dozen or so picks,” he said. “We have a personal and creative connection to so many of the artists who’ve shown at Paradigm.”

Perry said artists Kid Hazo, Bines, Caitlin McCormack, Alex Eckman-Lawn and Old Broads – all of whom have work featured in the exhibition he curated – had been involved with events at Tattooed Mom’s in the past.

“Robert from Tattooed Mom has been such a supporter of Paradigm for as long as I can remember,” said McCorriston. “He’s always making traveling artists feel at home and always posts about our projects.”

McCorriston praised Popova and her magazine also, which Paradigm has collaborated with as well.

Popova’s selections also include work by Rinaldi and Bates as well as Paul Romano, Zoe Hawk and Katherine Fraser.

“There were so many incredible pieces to choose from, but since I was limited to a few I focused on the available work that was featured in Create! Magazine,” said Popova. “In January, Paradigm invited me to co-curate an exhibition with artists published in Create! Magazine and there were a few highlight pieces I wanted to feature.”

The next exhibition will be curated by Megan Brewster and Erin Waxman, owners of Art Star, a gallery and boutique based in Northern Liberties. It’ll go live on Paradigm’s website on Tuesday at 3 p.m.

McCorriston left open the possibility of continuing the Insider Picks series even post-pandemic.

“Actually, yeah,” she said when asked the question. “We’re loving how it’s going already. The situation made us brainstorm to come up with it, [but] I think it’s something we will continue.”