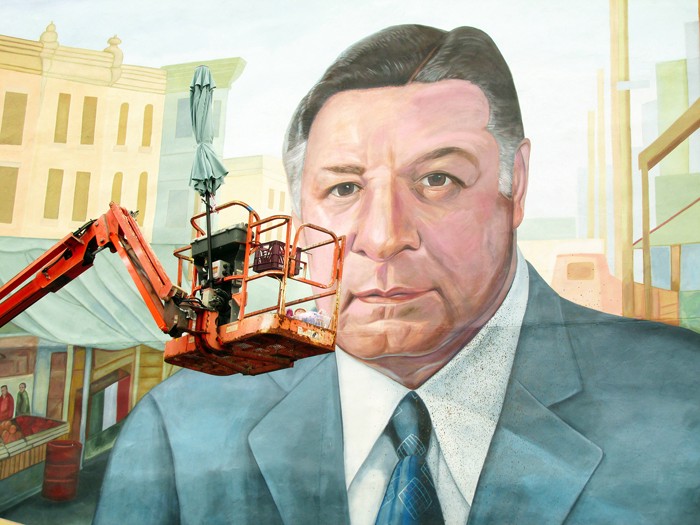 The city has removed the statue of late Mayor Frank L. Rizzo from in front of the Municipal Services Building on John F. Kennedy Boulevard.

On June 3, Mayor Jim Kenney announced that plans to remove the statue were expedited due to protests in the wake of the death of George Floyd. The statue was erected in 1999 in memory of the South Philly native who was a controversial figure as a former police commissioner and politician. He served two terms as mayor from 1972-1980, and critics claimed the city’s police department engaged in patterns of police brutality under his command.

“When we first announced our decision to move the statue, we chose to do so in a way that was cost-effective, by linking it to the pending renovation of Thomas Paine Plaza,” Kenney said. “That choice was a mistake – we prioritized efficiency over full recognition of what this statue represented to black Philadelphians and members of other marginalized communities. The continued display of the statue has understandably enraged and hurt many Philadelphians, including those protesting the heinous murders of George Floyd and too many others. I have seen and heard their anguish. This statue now no longer stands in front of a building that serves all Philadelphians.”

The mayor signed an order on June 2, directing the city’s managing director to remove the statue. It was removed overnight.

“The statue is a deplorable monument to racism, bigotry and police brutality for members of the black community, the LGBTQ community and many others,” Kenney said. “The treatment of these communities under Mr. Rizzo’s leadership was among the worst periods in Philadelphia’s history. The battle for equal rights and justice is still being fought decades later, and our city is still working to erase that legacy. We now need to work for true equity for all Philadelphia residents, and toward healing our communities. The removal of this statue today is but a small step in that process.”

According to city officials, the statue will be placed in storage by the Department of Public Property until a plan is developed to donate, relocate or dispose of it.

Meanwhile, the South 9th Street Italian Market took a similar stance in painting over the Frank Rizzo mural. The organization released a statement last week announcing it will replace the artwork. It was removed on Sunday.

“Together, the S. 9th Street Shopping District, the property owners and the Mural Arts Program are working to create a new mural that better represents the fabric of S. 9th Street to replace the current Frank Rizzo mural,” the statement said. “…We Agree it is time to replace this long-standing piece of art to begin to heal the Black community, the LGBTQ community and many others.”