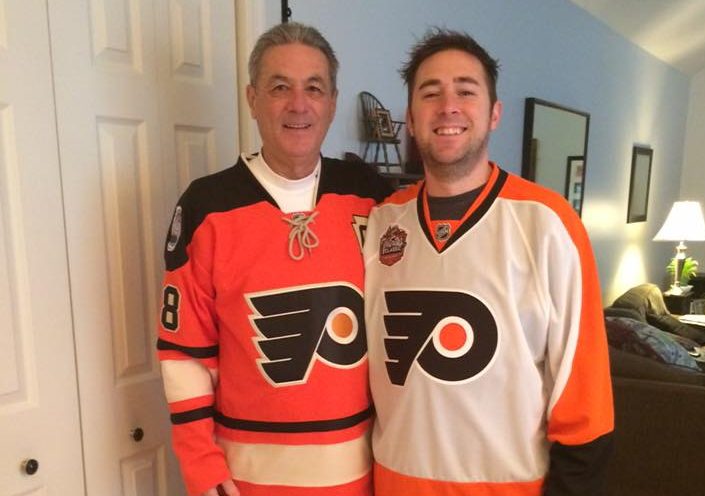 There are times in life when sports don’t matter. And there are other times when they mean everything.

In my house growing up, hockey has always been a driving force. As Flyers fans, every fall was filled with incredible optimism and every spring experienced heartbreak, with many great nights spent watching frozen pucks in between.

My 74-year-old dad, Joe Zimmaro, is a lifelong fan and some of his most important life events intertwine with the hockey team he loves. He remembers when Ed Snider brought the team to Philadelphia in 1967 and he partied hard when the Flyers won Stanley Cups in 1974 and 1975 — maybe a little too hard during the first one, which just happened to fall on his first wedding anniversary.

“I think she’s still mad about that one,” he said the other night, quietly, out of earshot from my mother.

He had promised to wine and dine with my mom in Mayfair that night, but plans shifted abruptly as that section of the city was overrun with orange as the Flyers had the chance to clinch their first championship. My parents ended up watching the game on TV.
How romantic.

He told that story to Bernie Parent when he shook his hand at a restaurant in Bucks County not long ago. My mom scowled, upon hearing it again. She insists she let it go after a year or so. Her vivid recollection says otherwise.

Then there was their first born’s christening on Jan. 11, 1976. You might remember it as the day the Flyers played the Red Army team of the Soviet Union. The priest dunked my sister Lynn’s head in holy water while my dad and his two brothers schemed an escape, quickly exiting stage left and out into the parking lot where they could listen to the play-by-play on the car radio.

“All the men were gone,” my mom said. “Even the priest had left and joined them.”
Legend has it, the boys might have shoved a few churchgoers en route to the car. My dad recalls tuning in at the point the Russians had left the ice in protest in the first period as the Broad Street Bullies pounded their communist foes with vicious physicality. The delay helped the trio eventually find a television to watch the rest of the Flyers’ 4-1 victory over one of the greatest teams in hockey history.

Years later, my dad introduced me to hockey.

In one of my earliest vivid Flyers memories, we went to our next-door neighbors’ house (they subscribed to PRISM) and we watched J.J. Daigneault score to force Game 7 of the 1987 Stanley Cup Finals against the juggernaut Edmonton Oilers. And I suffered my first heartbreak in front of our own TV three nights later as the Oilers prevailed 3-1 to win it all.

He took me to the Spectrum when we could find some extra change between the couch cushions. We weren’t poor but hockey games are pricey. And perhaps going to a live game once a year made it that much more special. The smell of fresh ice — there’s nothing like it. It created another fan for life.

I can remember being out pretty late on a school night in 2000 when the Flyers were playing Pittsburgh in a long overtime game. I watched it with friends and after the third overtime, I thought I’d race home and slip through the door quietly. I found my dad, Lynn and her soon-to-be husband sitting on the couch waiting for the fourth OT to begin. We watched another hour or so until Keith Primeau mercifully ended the game with a goal in the fifth OT at 2:35 a.m.

About 10 years ago, I decided that my dad’s birthday gift every year would be a date with his son to a Flyers game. Sometimes for Father’s Day, we’d go see the Phillies. I’m good at finding change in the sofa and I’m better at finding deals on the secondary ticket market. As time has gone by, our seats have gotten closer to the ice as you learn later in life that money spent with loved ones is always money well spent. And sometimes we just plain old lucked into some hand-me-downs for free. 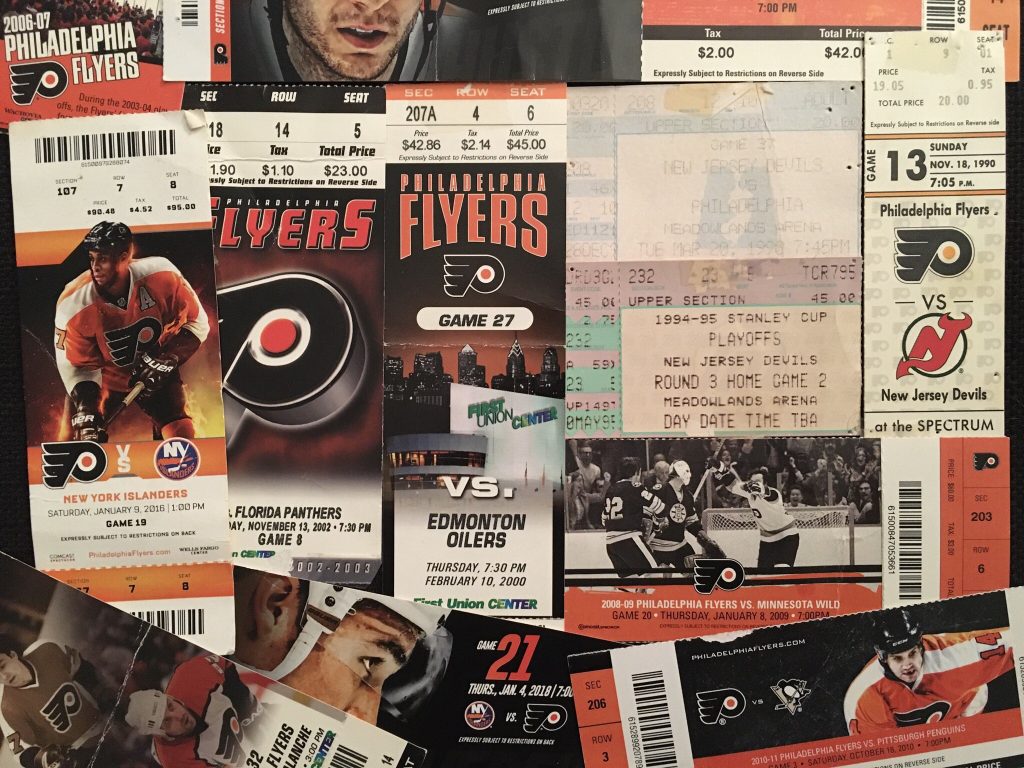 Despite being a self-proclaimed hockey encyclopedia, for the life of me, I can’t remember any of the scores of the games we attended. I remember James van Riemsdyk scoring a hat trick against Minnesota last year and I remember the Flyers beating the Canucks in the fall.

The things I remember clearly are having a blast with my dad at a game and eating cheesesteaks in the concourse as we arrived way too early. Napkins. Lots of napkins. We’re both pretty messy eaters.

We seem to create conversations with other people in our section and we always have the best ones between the two of us. We’d catch up. There’s always so much to catch up on.
This year for Father’s Day, my gift to him was pretty lame. I’m ashamed to say it was a couple of gift cards. COVID ruined that. And the looming possibility of sporting games without spectators was already casting doubt on our next time out.

He came over to celebrate my wife’s socially distanced birthday party in our backyard. We noticed he wasn’t speaking correctly, and my mom rushed him to the hospital, fearing a minor stroke. It turned out to be an inoperable cancerous brain tumor. The poor guy spent the next few days getting poked, prodded, screened and examined — all the necessary evils performed by an incredibly warm and wonderful staff at Abington Hospital. They’re just doing their jobs and they do them well.

On Thursday, he was able to return home as we await the more specific biopsy results and strategize a plan moving forward. 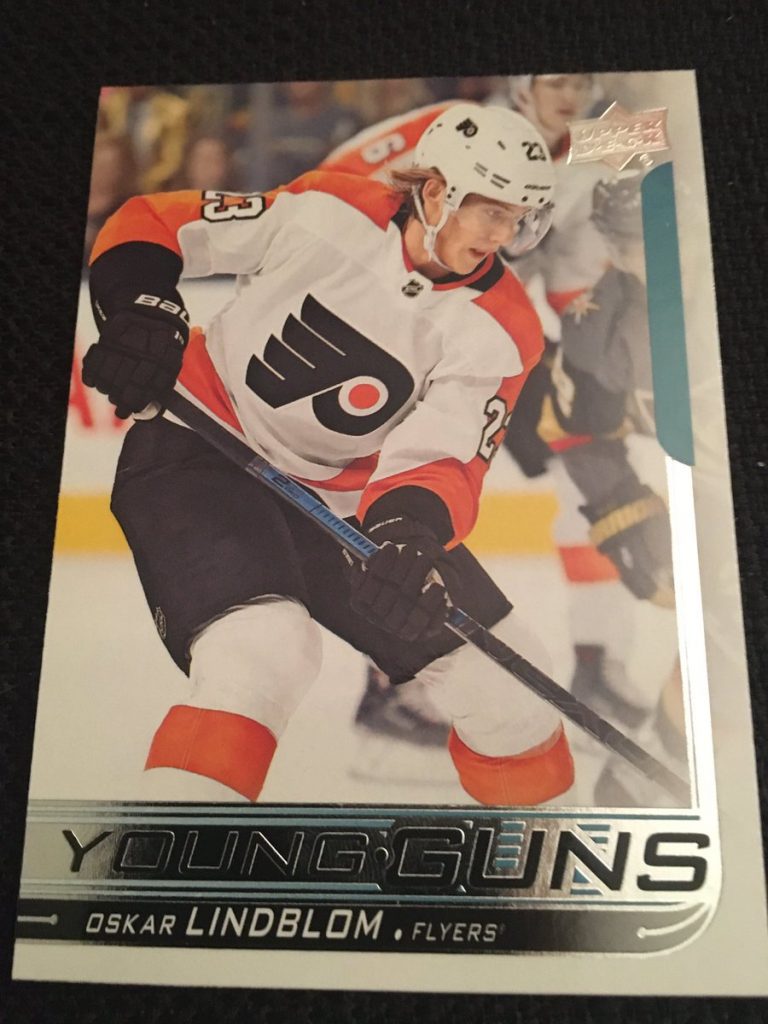 That same night, on television, we watched a video of Flyers forward Oskar Lindblom ringing the bell at Pennsylvania Hospital, signaling he had completed his treatment for Ewing’s sarcoma, a cancerous tumor that grows in the bones. It seemed the first good news of this brutal year 2020, and there were those Flyers again. They’ve skated alongside him in the biggest moments of his life.

Who better to idolize than a franchise built on fighting.