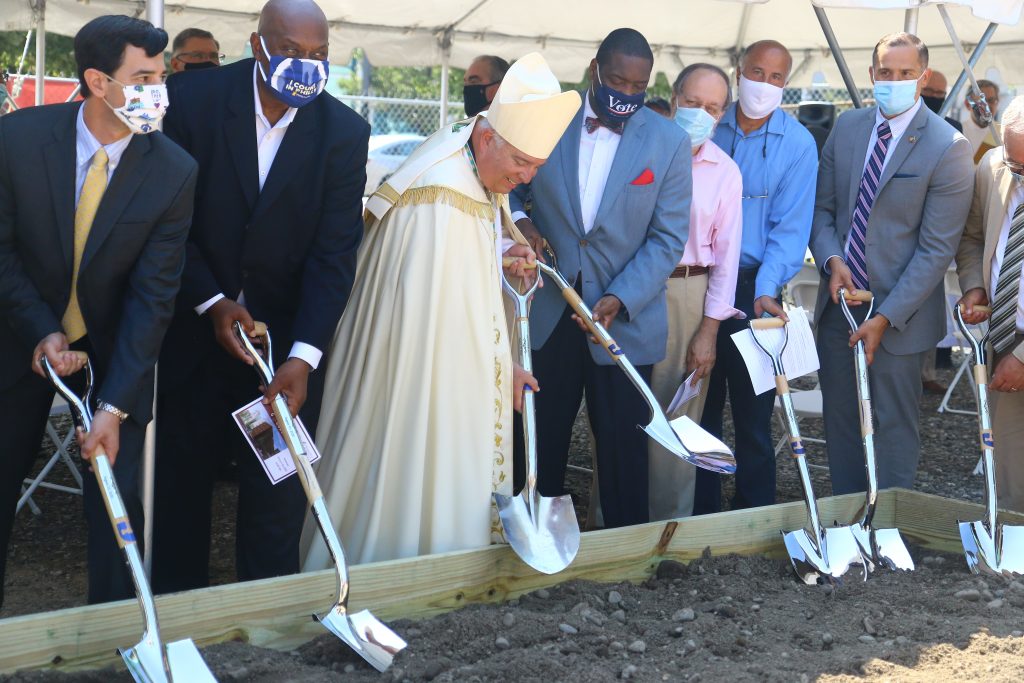 Philadelphia Archbishop Nelson J. Pérez presided over the blessing and groundbreaking service for Saint Rita Place, the Archdiocese of Philadelphia’s latest affordable housing community for independent seniors slated to open at the corner of Broad and Ellsworth in fall 2021.

“In the midst of COVID-19, which brings so much uncertainty and fear in the lives of so many people, to be able to do this groundbreaking after so many years is a sign of great, great hope,” said Perez. “This development will provide much-needed affordable senior housing as well as a Center that will promote peace, safety and well-being for members of this local community.”

The building was being designed by Cecil Baker + Partners and will complement the façade of the National Shrine of Saint Rita of Cascia, which is located adjacent to the south side of the complex. The building will consist of 46 one-bedroom apartments for income-eligible seniors 62 and older on the second through fifth floors. All units will be accessible for people with physical disabilities. Features of the building will include a community room, food cupboard, laundry facilities and resident lounges as well as on-site social services to assist residents with aging in place.

“I know we’re dealing with COVID-19 and the state of our city is in unrest, but today is a bright spot for me,” said City Councilman Kenyatta Johnson, who called himself “a strong advocate of equitable development” at the groundbreaking ceremony. 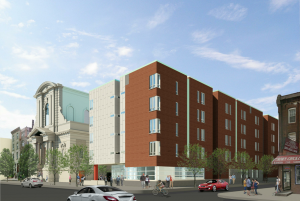 “I’ve met several different seniors who grow up in South Philadelphia and because we see the rapid development taking place in the community, they fear they will be displaced,” he added. “That’s so critical as we see the changing of this neighborhood.”

Saint Rita Place will also be home to the Cascia Center, a multi-purpose space for the work of “community-building, peacemaking and reconciliation” located on the building’s ground floor. The 7,500-square-foot space will consist of offices, conference rooms, a kitchen and facilities to serve the needs of individuals and groups who come as religious pilgrims to the National Shrine of Saint Rita of Cascia.

In 2019, the Saint Rita Place development was awarded with a tax credit allocation of approximately $12 million by the Pennsylvania Housing Finance Agency and is partnering with RBC Capital Markets and Capital One for financing of the development.

Executive Director of the Philadelphia Redevelopment Authority Greg Heller, who also spoke at the groundbreaking ceremony, said that the tax credit was key to the success of the project.

According to Heller, the Philadelphia Housing Authority has a 68,000-person waiting list for affordable housing.

According to a statement from Pennsylvania Housing Finance Agency executive director Robin Wiessman, which was read by Catholic Housing and Community Services of the Archdiocese of Philadelphia Director Heather Huot, since Wiessman couldn’t be present at the ceremony, more than 130 people have already inquired about living in the apartments.

“That figure alone demonstrates the tremendous need there is for affordable housing for our seniors, for veterans, for low-income families and for people with special needs,” the statement said. “That need is not just in Philadelphia, but it is statewide and national.”