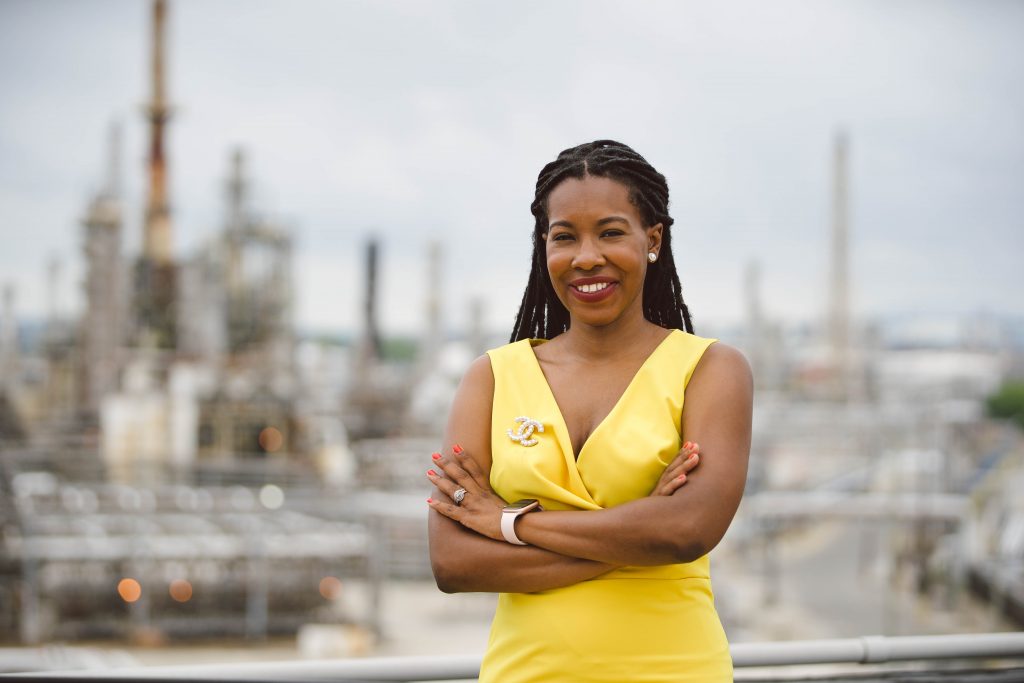 Growing up in the Point Breeze neighborhood of South Philadelphia, Sessoms has always had an interest in the nearby former Philadelphia Energy Solutions refinery along the Schuylkill River.

Last month, Sessions was brought on board by Hilco Redevelopment Partners to serve as the Senior Vice President of Corporate Affairs as the company begins to repurpose the former industrial site.

Sessoms will have a direct line between the company and local residents.

“I’m beyond excited,” Sessoms said in a phone interview last week. “I’m the luckiest lady in Philadelphia. I can’t wait to help make Philadelphia a better place to live, work and play. We’re excited to make this former refinery into something that will create jobs and help the local economy.”

In June 2019, the 1,300-acre refinery, which had served as the oldest operated refinery on the East Coast, exploded and shut down until it was sold to Hilco two months ago for $225.5 million. Hilco has vowed to spend half a billion dollars toward the environmental cleanup of the site, and promised about 18,000 jobs over the next 10 years. The redevelopment company has yet to determine exactly what type of businesses will go into that area but it promises to be a more economically friendly option from what was formerly at the site.

Sessoms will be in communication with residents and local politicians as plans move forward. She will oversee the company’s community and government outreach efforts as HRP executes a plan to clean up and transform the former PES refinery site into a state-of-the art, multi-modal logistics campus.

“This new position offers me the opportunity to leverage nearly 15 years of experience and relationship building here in Philadelphia for the good of our city,” Sessoms said. “Hilco’s acquisition of the former PES site ensures that after 150 years, this property will never again be used to refine hydrocarbons and will become an environmentally responsible and economically robust commercial hub.”

Sessoms looks forward to reestablishing her connections with the local community. She now lives in the Cedarbrook section of the city but never lost her sense of South Philly.

“I’ll be focusing on the surrounding community through newsletters and social media and emails,” Sessoms said. “I’ve already spent time standing outside the ShopRite to talk to residents because I wanted to know exactly what they were hearing. I want to be out in the community.

Sessoms is a graduate of Morgan State University and holds a master’s degree in organizational development and leadership from Philadelphia College of Osteopathic Medicine. She serves as a commissioner of the Governor’s Advisory Commission on African American Affairs and is chairwoman of the Pennsylvania Legislative Black Caucus Foundation.

She also previously worked as managing executive director of The Mayor’s Fund, where she oversaw $17 million of grants and awards for the city’s philanthropic priorities.

Sessoms founded and led the political fundraising firm J&S Strategies in Philadelphia. She is the founder and CEO of She Can Win, a movement that provides training and resources for women who are interested in seeking political office.

Her new role will add to an already impressive resume.

“Jasmine will serve as a key liaison to constituent groups throughout the city of Philadelphia and will use her deep understanding of the community to build trust and foster collaboration between HRP and the residents, groups and institutions we will seek to work with over the long term,” said Roberto Perez, chief executive officer of Hilco Redevelopment Partners. “She brings an incredible resume of experience, centered here in Philadelphia, in government relations, community affairs and philanthropy, most recently serving as a government relations officer at Community College of Philadelphia.”