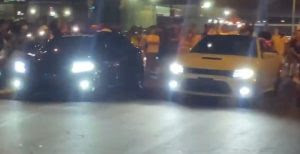 A woman was seriously injured after a car veered into a crowd during an illegal street race early Sunday morning.

According to police, the incident occurred at just a few minutes past midnight when two Dodge Chargers were racing side by side northbound along S. 3rd Street between Packer and Pattison Avenues.

One of the vehicles, a white 2019 Dodge Charger SRT, lost control and swerved east into a crowd of people and two parked vehicles, police said. A 45-year-old female spectator was struck by the vehicle and suffered serious injuries, police said. She was transported to the  Hospital of the University of Pennsylvania where she was listed in critical condition and is expected to have her right leg amputated, police said.

According to police, three unknown black males were observed exiting the white Dodge Charger and fled on foot. The vehicle, a dark colored Dodge Charger, continued to travel northbound and never returned to the scene, police said.

According to police, the white Charger that struck the victim was seen taken away by an unmarked white tow truck.

Anyone with information about the crime, the suspects, or the missing vehicles is asked to call the Accident Investigation Division at 215-685-3180/3181.