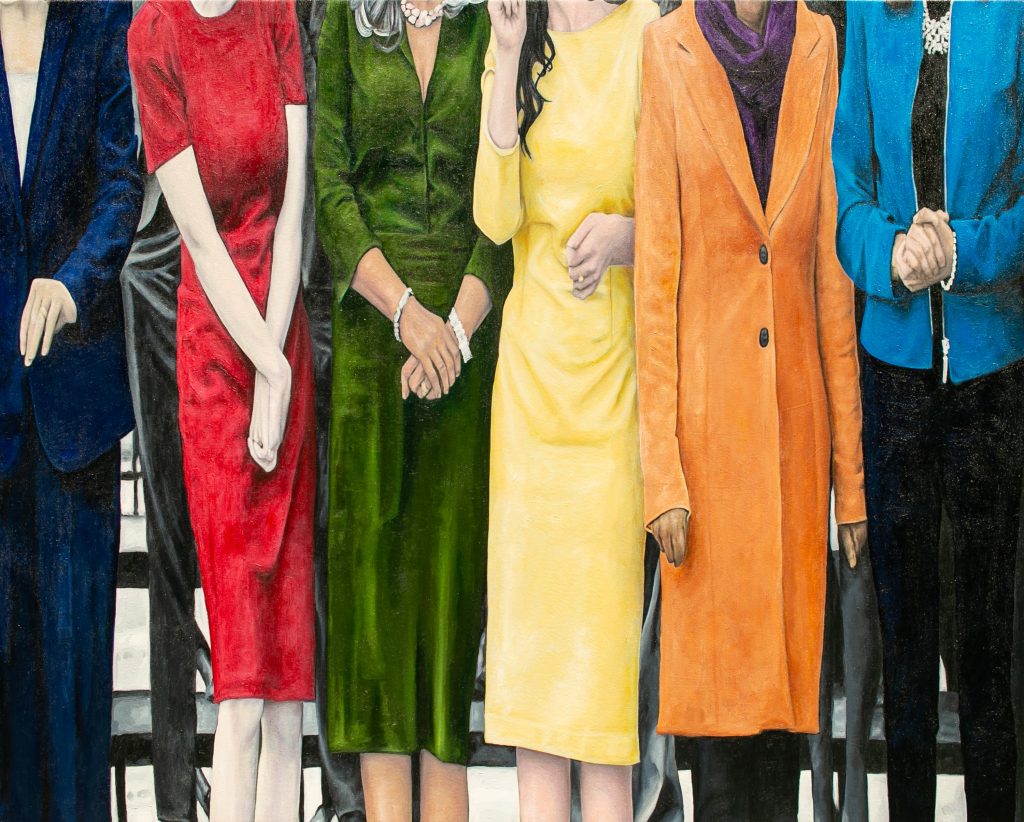 In the wake of the 2008 financial crisis, studies showed that banks led by a higher proportion of women fared better during the great recession. Fast forward to 2020, and a study from Liverpool University and Reading University showed evidence that women-led countries “reacted more quickly and decisively in the face of potential fatalities” when dealing with the COVID-19 pandemic, saving countless lives. Data like this suggests that women may indeed make for better leaders than men, but despite this, only a small minority of countries and Fortune 500 companies are led by women. Why is this? Perhaps it’s because we spend too much time worrying about what they’re wearing. From Hillary Clinton’s pantsuits to Condoleezza Rice’s boots, the way women dress has all too often taken precedence over women’s ideas in political discussions – in the media or otherwise – across America. And it’s something Fishtown artist Lauren Rinaldi decided to hone in on for her latest exhibition, Representative, which opened Friday at Paradigm Gallery + Studio in Queen Village.

“This particular body of work got sparked when I was watching the new class of congresspeople who were going to be sworn in in 2018,” said Rinaldi. “I saw all of the members of Congress out in a big group to take a picture, and what really struck me was the women and the diversity and the bright jewel tones and colors that were standing out among the blacks, the blues. And I just started thinking about, ‘Wow, this is a really diverse crowd of people and so many women.’ ”

The exhibition features Rinaldi’s painted versions of sourced controversial photographs taken during the course of the last several years in American politics that felt meaningful and powerful to her. One example is the picture taken of Rep. Alexandria Ocasio-Cortez’s back as she walks down a hallway, which was famously shared in a since-deleted tweet by Washington Examiner journalist Eddie Scarry with the caption, “I’ll tell you something: that jacket and coat don’t look like a girl who struggles.”

Rinaldi said she used politically associated women as “a vessel to explore the ideas of how women present themselves in the professional world and just the world in general.”

Those familiar with Rinaldi’s work will know her art has always focused on female empowerment and feminism. However, this exhibition is different in that it’s explicitly political. It was the 2016 election that made her “more outwardly political,” she said. She even ran for a committeeperson seat in the 18th Ward, which she won. She’s been serving since 2018.

“So my mind has been on that track a lot,” she said. “It, of course, leaked into my artwork because my artwork is usually pretty reflective of what’s going on in my life.” 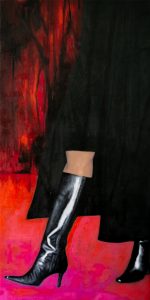 Some of Rinaldi’s earliest memories of judging women based on their appearance happened in high school.

“I have had teachers in high school make me put on a sweatshirt or literally measure my straps on my tank top,” she said, referencing her school’s strict dress code that tended to single out only women’s clothing. “Guys don’t have that burden at all.”

Politically minded viewers, and even some who may not be so invested into the political realm, will recognize many of the figures in Rinaldi’s exhibition, which includes paintings that feature Ocasio-Cortez, Rice, Sen. Kyrsten Lea Sinema and former first lady Michelle Obama.

For Rinaldi, the exhibition’s title is somewhat of a double entendre.

“Many of them are actual representatives or members of Congress so that was a literal description,” she said, “but it’s also their diversity and what they bring to the table as women and as people of color and as Muslim women and Native American women and bisexual and gay [women.] … To me, they’re literal representatives, but they’re also representative of their actual constituents.”

Due to COVID-19, Representative will be available for viewing by appointment only or on paradigmarts.org until further notice. It will be on exhibition until Sept. 19.

‘Not Forgotten’ at Da Vinci AA