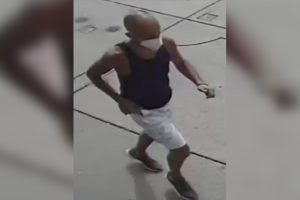 Police are looking for information on a man who assaulted and robbed a victim on South Broad Street in July.

According to police, the suspect was captured on surveillance video stalking the victim on July 9 at approximately 4 p.m. on the 2500 block of South Broad Street and followed the victim to the 2400 block where the confrontation occurred.

The suspect punched the victim and stole a handbag despite the victim fighting him off. The victim followed the suspect back to the 2500 block and yelled for help before the suspect fled., police said.