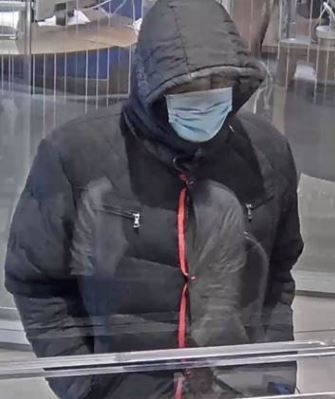 The FBI and Philadelphia Police Department’s Violent Crimes Task Force is asking for help in locating a suspect who robbed the Chase Bank at 2815 Grays Ferry Avenue in South Philadelphia on Tuesday.

According to police, the robbery took place at 10:50 a.m. when the suspect entered the bank, approached the counter and handed a note and a withdrawal slip to a teller. After receiving an undisclosed amount of cash, the suspect fled on foot, police said.

The suspect was captured on surveillance video and is described by police as a black male in his late 20’s or early 30s, approximately 6’0”-6’2” tall, thin build, and dark complexion. He was wearing a black hooded winter coat with red trim, ripped blue jeans, and black high-top Chuck Taylor-style sneakers, police said.

Police said the subject should be considered armed and dangerous. Anyone with information about this robbery or this subject is urged to call the FBI/PPD Violent Crimes Task Force at 215-418-4000. A reward is being offered for information leading to this subject’s capture and tipsters can remain anonymous.