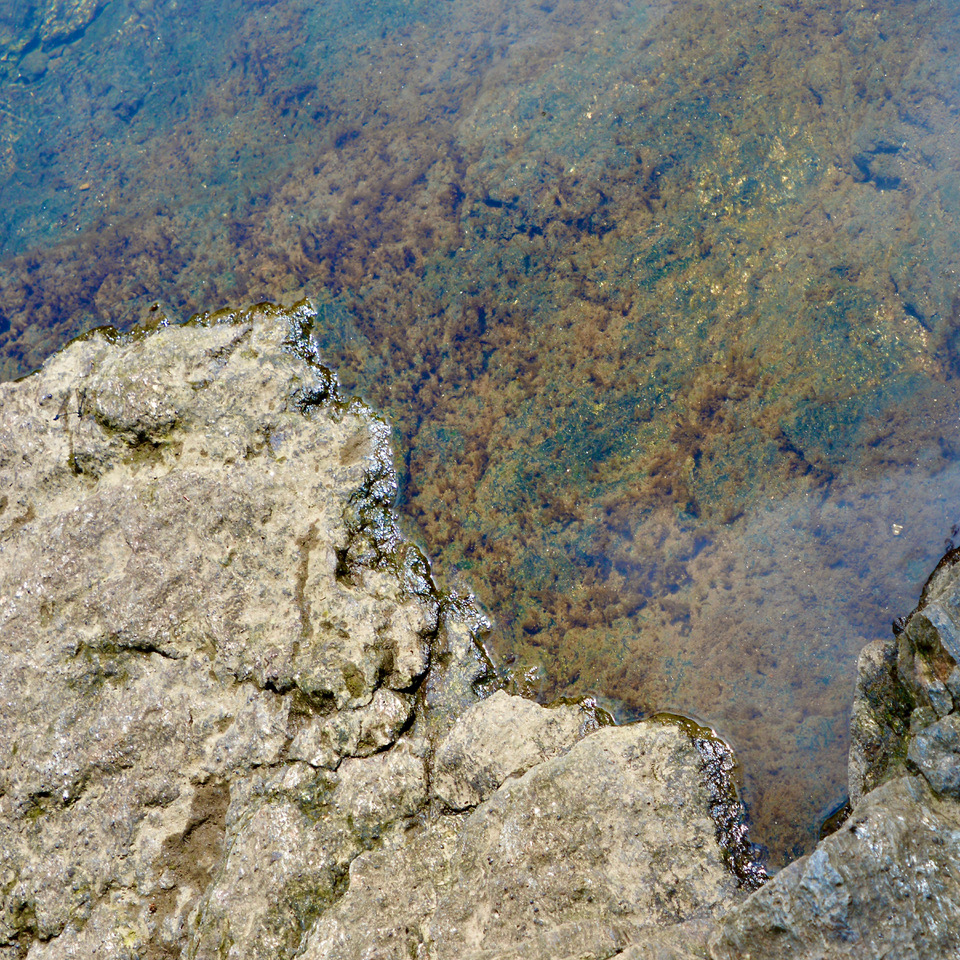 The Homo sapien species has been around for hundreds of thousands of years, and it’s safe to assume that humans have been manipulating the environment around them ever since. When you think of architecture, you might think of skyscrapers, baseball stadiums and suburban homes. But in the paleolithic era, when humans first came to be, architecture primarily consisted of a building material much more primitive than cement, steel and brick. During this time, humans built with rocks. Two Melrose Park-based artists, Dana Scott and Rebecca Schultz, have teamed up to bring an exhibition to Bella Vista’s Da Vinci Art Alliance, 704 Catharine St., that draws upon both man-made and natural stone structures local to the Philadelphia area. The work consists of photographs, taken by Scott, of Philly-area rock formations located in places like Wissahickon Park, Wissahickon Creek, Cresheim Creek and Rolling Hill Park, which are UV printed onto glass panels. From there, Schultz completes the process by painting over top of the panels, adding the last layer to each completed piece. The exhibition, entitled Reclamation, opens Sept. 16 at DiVinci and will open to the public both by appointment and online as a 3-D virtual experience. A few weeks before the exhibition began, SPR was able to talk to Schultz and Scott about how their collaboration formed, where the idea for the exhibition came from and how its title came to be.

Where did the idea come from to do this specific exhibition?

Schultz: We both have been inspired by rock formations in our work. I went to Detroit and I did some drawings. I generally have focused on natural landscape, but in a couple of places I went last year, including Detroit and actually I went to Ireland as well, I became really interested in human-built structures that were abandoned and being reclaimed by the landscape. I was thinking about the relationship between humans and rocks and the kinds of structures humans had built with rocks. So when we started talking about this, the initial point was geology and rocks that I was interested in exploring further – this idea of stone ruins, and so my portion of it is coming from drawings of abandoned stone buildings in the Philadelphia area, which are primarily built from the Wissahickon Schist. Looking at what people in this area built their stone structures from and what their purpose was. And thinking about the fact that a lot of the stone structures were industrial buildings like mill buildings or what have you and so they’re built in what are now parks because they’re along the river or in other places that were conducive to industry at the time but now they’re not being used because the parks have also reclaimed land, so to speak.

Scott: I think if you look at our artist statements, the initial interest in having a show together was that it was pretty obvious that our inspirations paralleled and our interests paralleled. We started discussing having a show together and the potential of doing a collaborative piece. Looking at our artist statements, there’s actually a lot that parallels there as well. [Rebecca] had talked a lot of this reclamation and that’s something I’ve really been interested in my work as well – this back and forth between man and nature. This power struggle almost between man and nature and how they’re constantly trying to claim and reclaim. So that’s something that I’ve been interested in and it shows itself in my work more in pattern and in composition.

What spawned the collaboration between you two for this exhibition?

Scott: I’d seen your work and I was saying to Chris, my husband, I gotta have a show with Rebecca. Visually it’s very different, but it’s still what you are looking at and interested in is paralleled completely to what I am looking at and interested in and I just thought it would be a really nice fit. So I think I did propose it. I was just like, ‘This has to happen.’

Schultz: And the interesting thing about our relationship is that we went to Rhode Island School of Design together for undergraduate school. We were in the same class. We were friends, we hung out, we graduated three years ago almost and lost touch. I was living in California, and Dana was in Brooklyn and then Philly. Then we reconnected over social media, then in 2016 I

decided to move back to Pennsylvania, where I’m from originally. And so Dana, in part, really encouraged me to live in the neighborhood we now live in and ironically we ended up around the corner from each other but also realized we had all these kinds of interesting connections in terms of our work. So it’s awesome that we decided to create this piece together because it’s kind of an extension of reconnecting on a personal level, but we’re connecting on an artistic level as well. So it’s really cool to me that we’re able to do this project.

Is there a goal of the exhibition? Is there something you’re trying to make people think when they look through it?

Scott: For me, I would always like people to have a personal experience whether I have a goal or not. But, it was important for us to have this be local. Have this be local structures, local stone formations so a lot of what we’re working with is from Valley Green Park or is Philadelphia-specific parks and stone formations. Also the history here of using the Wissahickon Schist to build a lot of the structures that Rebecca’s photographing and sketching as they’ve kind of dissolved back into nature. But when we first started thinking about the exhibition, we were thinking about all the different places that we’ve been influenced by and how global they were, but then when it came down to actually putting this together, it became very important that this was very local and just kind of bringing that awareness to people. Often, people go through the world with blinders and they don’t notice those really amazing details in things that are right in front of them, so it’s a bit about that.

Schultz: This idea of temporality and impermanence in the environment in relation to both the fact that the only constant in the environment is change regardless of human influence or not, but humans are accelerating these changes. Thinking about the time scales or the formation of rocks in contrast to the time scales of a building and their construction and decay and thinking about this natural cycle and how quickly a building can fall into ruin. Getting people to think a little bit more about how permanent a human’s place on the planet is and our relationship with our own built environment as well as the natural environment. So that’s something that I hope people can reflect on a little bit and think about how rapidly the landscape can change.

This interview was lightly edited for brevity and clarity. For more information about Reclamation, visit davinciartalliance.org. The exhibition runs until Oct. 4.