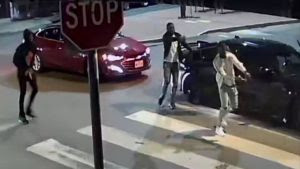 Police are looking for suspects involved in a shooting that was caught on surveillance video.

According to police, on Sept. 22 at approximately 12:15 a.m., three vehicles followed a victim along the 800 block of S. 2nd Street before boxing in the victim at Christian Street. The suspects fired several shots at the victim who was able to escape, police said.

Anyone with  information about this crime or these suspects is asked to contact the South Detective Division at 215-686-3013/3014.