Bridget Smith had listened to the stories and heard about the tragedies firsthand.

As families continue to lose their young sons and daughters to opioid addictions, Smith wanted to make sure her point got across loud and clear.

Smith’s first crack at directing a full-length film was certainly an emotional, moving effort, as her new movie “Sno Babies” takes a hard and honest look at opioid overdoses among teenagers. The South Philly native, who has worked in acting, stand-up comedy and theater, brought the story close to home, as it’s set in suburban Philadelphia with trips to opioid hotspots inside the city.

The story doesn’t hold back on the grim realities of the addiction, and Smith said she never thought about the possibility of going too far in pushing the envelope with touchy subjects.

“I don’t even know if I’ve had that thought,” Smith said after a private screening of the movie at Punchline Philly in Northern Liberties. “The reality is, before making the film, I had met with all these families that had lost children. And I met with so many recovering addicts. One girl was 22 and she was full-blown at 16 and a lot of things you see in the film she gave us. I think the idea that it goes too far goes out the window because when you hear the real stories, you think I don’t know if we can go far enough to drive it home. As hard hitting as it is, I didn’t want to water it down because there’s nothing pretty about it.”

The story centers around an Ivy League-bound teenager played by rising star Katie Kelly. Her character, Kristen, gets hooked on heroin along with her best friend Hannah and hides her mounting problems from her well-meaning but otherwise oblivious hard-working parents. It’s one emotional gut punch after another as the tragedies unfold throughout the movie.

Smith’s goal is to get people to talk about the opioid problem and come up with solutions.

“The only thing that’s going to make a dent in this problem is talking about it,” said Smith, who grew up near 28th and McKean streets. “I’m from South Philly, and we talk about everything. So the fact that people don’t talk is mind-boggling.”

The plan is in action.

The movie, which is a product of Better Noise Films and Philly Born Films, can be seen by Video on Demand on Amazon Prime, iTunes, VUDU, Google Play and FandangoNOW. “Sno Babies” will also have a theatrical premiere once COVID-19 health concerns are eased.

Aside from striving to be a hit movie, “Sno Babies” raises money for the Global Recovery Initiatives Foundation, the first and only national community foundation dedicated to funding support services for people in early recovery from substance use disorders. Every sale and stream of the movie, the soundtrack and the song “Maybe It’s Time” raises money for GRI. It was an important initiative for many involved with the movie, including the now 20-year-old star of the film. 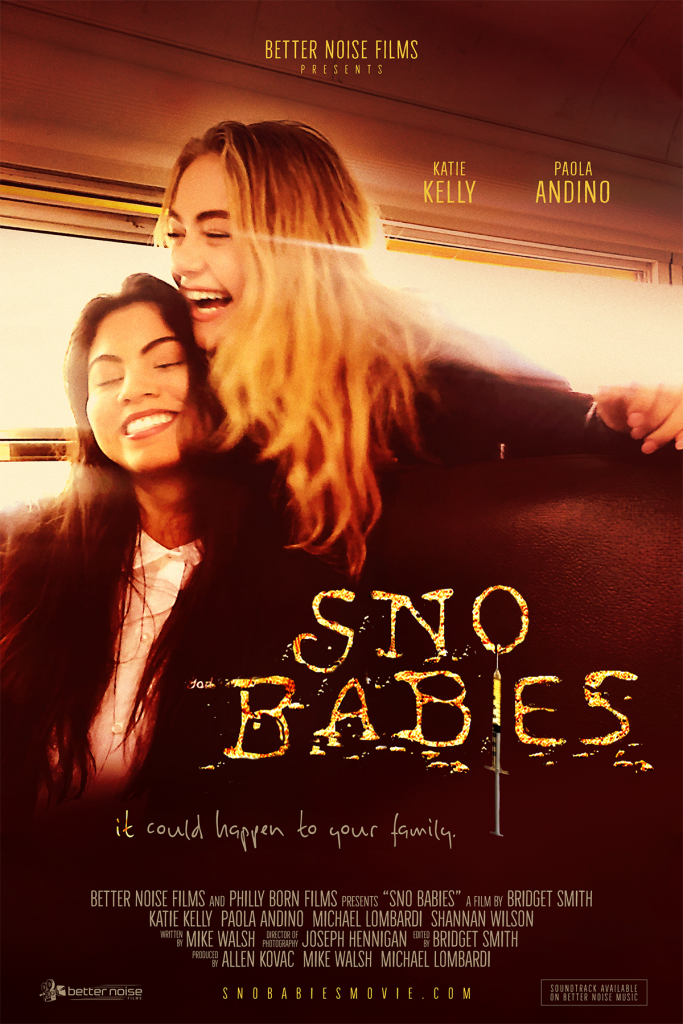 “That was our mission,” said Kelly, whose fantastic performance has caught a lot of attention from film critics. “Everything we did with the film was in the hopes that we could save at least one life. We just hope that this film can open up conversations that people are maybe sweeping under the rug because they are difficult.”

The strong message was drilled home at the end of the movie in a positive manner. It’s one that didn’t go unnoticed by South Philly actor Dominic Costa, who played a small role as an inner-city drug dealer in the movie.

“You have to tell all those graphic parts of the story so you can deliver the positive message so people can see what it’s like,” said Costa, who resides in Girard Estate. “If you see what’s so traumatizing and the horrors in it and then carry that arc in the story, you can get to the positive message.”

The message originates from Producer Mike Walsh, who wrote the film 22 years ago after an overdose death occurred in his daughter’s high school. Also inspired from the 1995 movie “Kids,” Walsh met Smith and knew it was time to bring his script to life.

“I’ve had the opportunity to sell ‘Sno Babies’ a couple times but it was too close to my heart to do that,” said Walsh, a native of the Juniata part of the city. “When I met Bridget and we worked on another project together, I knew she was the right one to tell this story.”

Smith has come a long way.

Now living in New York, the Saint Maria Goretti High School alum got her start as a stand-up comic and appeared on Comedy Central’s long-running series “Premium Blend.” She caught the directing bug at the theater and transitioned to film with several more features in the works, including “7th Secret,” “Lucky Jack,” “Right Before Your Eyes” and “The Retaliators.”

“I was always in the entertainment industry,” Smith said. “I was an actress for years, did stage and stand-up and was on Comedy Central. I got into directing in New York and was asked to direct a theater play, one act. And I loved it. I never thought I’d do film but now I love it and can’t imagine not doing it.”

Now that she’s found comfort in directing, her hard work and dedication have become contagious around movie sets. She promotes a place for stars to shine.

“Bridget creates an atmosphere that is perfect for artists so that they can feel comfortable doing their thing,” Walsh said. “And she really knows how to tell a story and she knows what she wants. She’s a rising star in the directing world.”