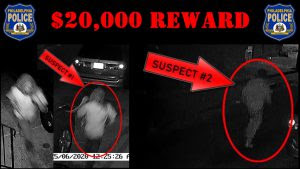 The Philadelphia Police Department Homicide Unit is looking to identify the two individuals depicted in surveillance video, as part of an ongoing investigation into the shooting death of a thirty-year old male, that occurred in the 1900 block of S. Croskey Street on June 25th at about 1:20 a.m., police said.

The men are seen fleeing the scene on Croskey Street, eastbound onto the 2200 block of Mifflin Street and one suspect appears to be limping. Police said it is unknown if his injury was sustained during the shooting.

Both males are described as black males in their early 30s, with one of the males described as tall and heavier built and the other male described being of average height and built, police said.

Police warn that Infrared lighting may affect the color of the individual’s clothing as well as his skin complexion, possibly making them appear much lighter than they really are.

The City is offering a reward of $20,000 leading to an arrest and conviction. Anyone with information about this crime or these suspects is asked to contact the Homicide Unit at 215-686-3334/3335.