So much so, that she ran out of room in her first book of “100 Things To Do In Philadelphia Before You Die,” that she created a Volume 2.

The sequel to the 2016 book will be a big talking point, as the Rittenhouse author will take part in a virtual book talk for A Novel Idea bookstore on East Passyunk Avenue on Oct. 20.

Baker will be speaking about staycation ideas, new attractions, lesser-known attractions, good places to social distance and how to help restaurants survive. It’s all part of her findings, which have been explored through writing her Philadelphia-centric books.

“I wrote the first book in 2016 and after only four years, there was clearly a compelling need for a new (book) because there is so much new,” Baker said. “And this book has even lesser-known sites, which makes it even more useful for locals.”

The book takes readers around various parts of the city and beyond, as it includes a few stops in the suburbs and South Jersey. She romanticizes about one of her favorite spots to visit in Laurel Hill Cemetery and takes a deep dive into her favorite shopping and dining destinations across the area.

Readers can prepare to discover must-see attractions such as the Reading Terminal Market, the Museum of the American Revolution, Magic Gardens, mural tours and Spruce Street Harbor Park.

“This is a real rodeo and you feel like you’re in Wyoming,” she said. “And it’s only 45 minutes from Center City. If you have a cowboy hat in the back of your closet, this is the place to wear it.” 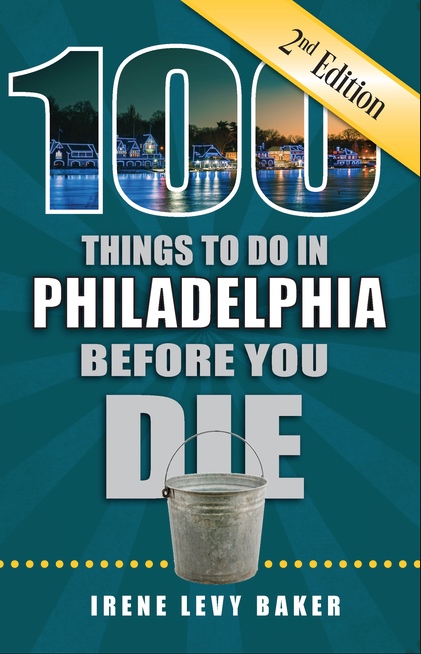 The two editions of “100 Things To Do In Philadelphia Before You Die” sandwich Baker’s 2018 book called “Unique Eats and Eateries in Philadelphia,” which tells the sweet and spicy secrets behind famous Philadelphia restaurants and uncovered gems. While writing three books about Philadelphia, in a short time, Baker has put her personal stamp on famous cheesesteak landmarks Pat’s and Geno’s along with South Philly staple DiBruno Brothers, but also explores lesser-known places like Pop’s Water Ice on Oregon Avenue and Mr. Martino’s Trattoria on East Passyunk Avenue.

Although the three books were produced in just a four-year span, the knowledge and research go back much further. Baker was born in Ohio, however, she has lived in Philadelphia since the early 1990s and previously worked for the Philadelphia Convention and Visitors Bureau for about a decade before starting her own firm called Spotlight Public Relations in 1998, which specializes in publicizing restaurants and hospitality industries. Her job was to seek out new and exciting places for travel journalists to write about. Baker’s resume certainly qualifies her to opine on Philly’s restaurant and social scenes.

Baker’s love for Philadelphia doesn’t end with her words. Her next step is to express her excitement through a virtual book talk called “There’s No Place Like Home,” which will be accessible through Zoom on Oct. 20 at 7 p.m.

Registration is required for the book talk by visiting https://www.eventbrite.com/e/theres-no-place-like-home-fun-in-philly-author-event-online-tickets-122550861927. There is a $5 suggested donation.

“I’m going to be talking about some new attractions and some lesser-known attractions that even longtime South Philadelphians might not know about,” Baker said. “I’m also going to give more suggestions on where you can go and social distance and give some tips on how to help our local restaurants survive.”

Signed copies of the book are available for $17 (plus shipping) at www.100ThingsToDoInPhiladelphia.com. The book is also available at Amazon, Barnes and Noble and some independent bookstores. More information, including tips for things to do in Philadelphia, are also on her website.

“My book would have been easier to write if it was called 1,000 Things To Do In Philadelphia,” Baker said with a laugh. “Narrowing it down to 100 was probably the hardest part.”