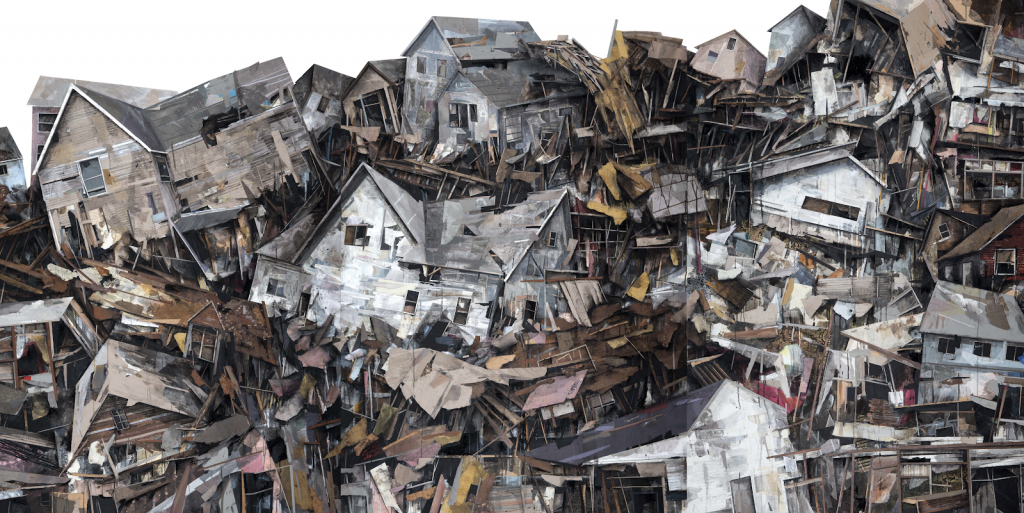 Coming off the heels of his last exhibition at Paradigm Gallery in 2018, Pittsburgh-based collage artist Seth Clark is now back at the Queen Village-based art gallery for his most recent showing of his work, In Isolation, which opened on Oct. 23. Clark’s work has always focused on collages of deteriorating architecture, and Isolation is no exception. What separates this batch of collages from previous ones is that Clark utilizes “a looser and more gestural hand.”

“I am a bit more painterly than normal with this body of work,” Clark said. “I usually spend a lot of time cutting out specific shapes of paper for the collage element or cleaning up the background of a piece to have crisp, clean edges. In this series, I let the scraps of paper dictate themselves and let the drips stay on the surface. A bit more of the messiness of the process is revealed this way.”

The highlight of In Isolation is Mass II, described as a “a monumental 12-foot collage of fragmented ruins of dozens of collapsing homes layered on top of each other.” The piece was originally created for the Pittsburgh Biennial in 2014.

“At the time, I was exploring imagery from the Johnstown Flood of 1889, where the dam of a hunting and fishing club broke due to human neglect causing over 2,000 deaths,” said Clark, who hadn’t seen the piece in four years because it was in a traveling exhibition. “When I got the crate back to the studio, I pulled the piece out and thought, wow, this really symbolizes what America feels like to me right now. I think the chaos, the neglect, the upheaval – it can all be found in that work.”

Clark’s work might prompt viewers to recall the architecture of old structures found in rural areas, however, Clark says that the inspiration for his work comes from “nowhere specific.”

“I will say that I’ve been walking the back alleyways of my neighborhood quite a bit over the past year,” he said. “I think a lot of the textures and colors and richness of these homes (most over 100 years old) have seeped into these recent paintings.”

Clark said that he considered the use of negative space for this exhibition more than previous ones.

“This is the first time I have been thinking about the negative space around my houses as a reference to nature,” he said. “I try to emphasize that in these newer works by pulling the black or white of the background across the boundary of the home and vice-versa. It is a different approach than in the past.”

Clark, who created many of the exhibition’s works while quarantined due to the pandemic, said he hopes his art “encourages people to reflect more on how our relationship with home has changed so much over the past year.”

In Isolation will be on view at Paradigm virtually until Nov. 21. Those who are interested can also schedule in-person appointments to view Clark’s work on Paradigm’s website, paradigmarts.org.