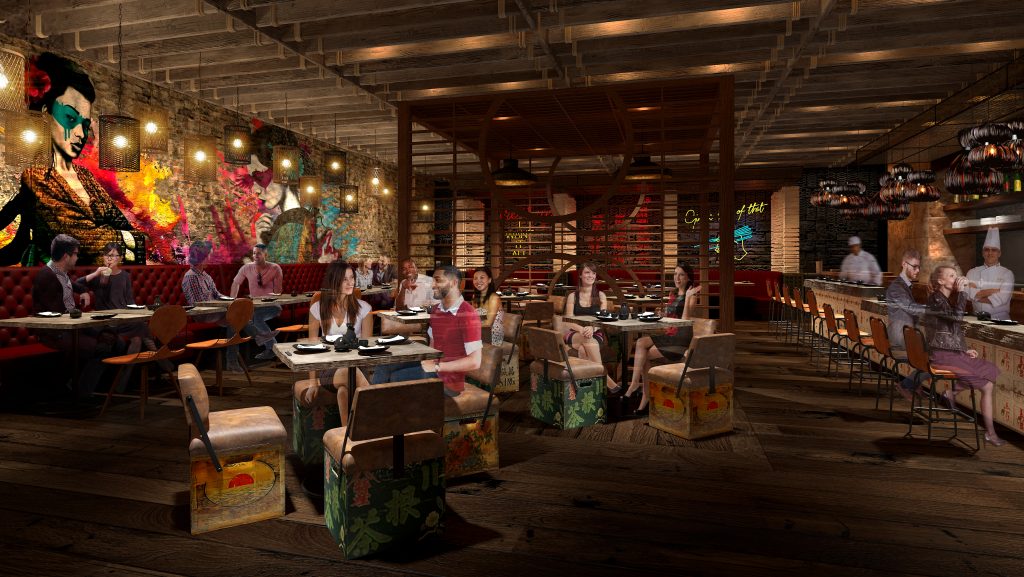 The list of meal choices at the soon-to-open Live! Casino and Hotel in South Philadelphia continues to grow with the addition of Asian-themed restaurant Luk Fu.

Pronounced “Luck Foo,” the restaurant specializes in traditional authentic flavors of Southeast Asia and will occupy a vibrant setting once the casino opens early next year at 10th Street and Packer Avenue in the Stadium District.

Luk Fu will be located by the High Limit Tables Room on the casino floor once doors officially open. The 132-seat restaurant is surrounded by dynamic colors in the form of graffiti-style murals and urban art, with an accent of neon splashes, giving the establishment a jolt of energy.

The design centerpiece is a custom screen handmade out of more than 250,000 individual chopsticks. Popular in Asian cultures, screens are used to define semi-private dining experiences. These thousands of chopsticks create screens between booths, while tea crates were converted into dining stools.

“The Asian community in Philadelphia has been tremendously supportive of our project from the very beginning, so we are thrilled to introduce a restaurant concept that is reflective of the diversity of this community,” said Joe Billhimer, executive vice president of Cordish Gaming Group. “We want Luk Fu to be a place for friends and family to gather and enjoy the wonderful culinary offerings Chef Wu has created, while also being in the heart of one the most exciting neighborhoods in the city.”

Luk Fu joins a lineup that will include local favorites Lorenzo and Sons Pizza, Sang Kee Noodle Bar & Kitchen and Termini Brothers Bakery, along with a pair of restaurants from national award-winning chef and television personality Guy Fieri, who will open Fieri’s Taco and Burger Joints, which will operate separately inside the casino. More restaurants and establishments will be announced in the coming months, according to the Cordish Gaming Group.

Luk Fu will be run by General Manager Laura Kim, who has several years of experience in the hospitality industry, which includes a role as the director of operation for INDAY in New York City, where she collaborated with team members to set standards and systems for HR, branding, accounting and culinary department. In her new position, Kim will have daily oversight of the food and beverage operations as well as the staff.

The culinary team is led by Chef Wei C (Sam) Wu, who contributes more than 30 years of professional cooking experience to Luk Fu. Wu has worked the kitchens at several casino properties, including Resorts International Casino and Hilton Casino in Atlantic City, and most recently, Rivers Casino Philadelphia, where he was tasked with developing menu items for each restaurant that reflected current trends and local tastes.

The menu will include appetizers such as watercress shrimp and pork dumplings, Vietnamese spring rolls and crab rangoon, as well as traditional noodle soups, such as fat beef pho and oxtail soup. Guests can taste Cantonese fried rice and wok fried noodles variations along with classic dishes such as General Tso’s chicken and Chinese pepper and steak. Barbecue pork and tofu are also slated to be big hits on the menu. Chef specialty entrees include lemongrass pork chop, Hong Kong-style clams and crispy Chilean sea bass.

After a full belly, patrons can sing the night away in the back of the restaurant with an evening of karaoke. 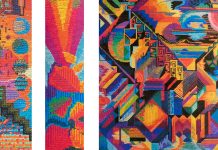