Brian Corazo’s Christmas list was straight to the point.

Sure, the 11-year-old from South Philly’s Whitman neighborhood wouldn’t mind seeing a PlayStation 5 under his tree this year. But Corazo wanted something else much more: He wanted other less fortunate kids to have a wonderful holiday.

The sixth-grader from Christopher Columbus Charter School began dedicating his time to collecting toys, in what turned out to be an enormous toy drive to benefit less fortunate children in the South Philadelphia area. You could call him Santa’s little helper. He preferred the term “Mini Claus” as his cheeks curled up with a grin under his protective mask.

“It makes me really happy and I just wanted to see other people happy,” Corazo said.

It started off as a Toys For Tots effort with the intention of delivering new toys to kids being treated at Children’s Hospital of Philadelphia. Brian’s 4-year-old brother Noah receives treatment for panhypopituitarism at CHOP. Noah was born without a pituitary gland, which controls involuntary functions of the brain and hormones in addition to having a high-risk immune system. Noah is supported by ongoing medical care but is likely able to be home with his family for Christmas. His older brother Brian began thinking about the other patients at the hospital who wouldn’t get to go home for the holidays. 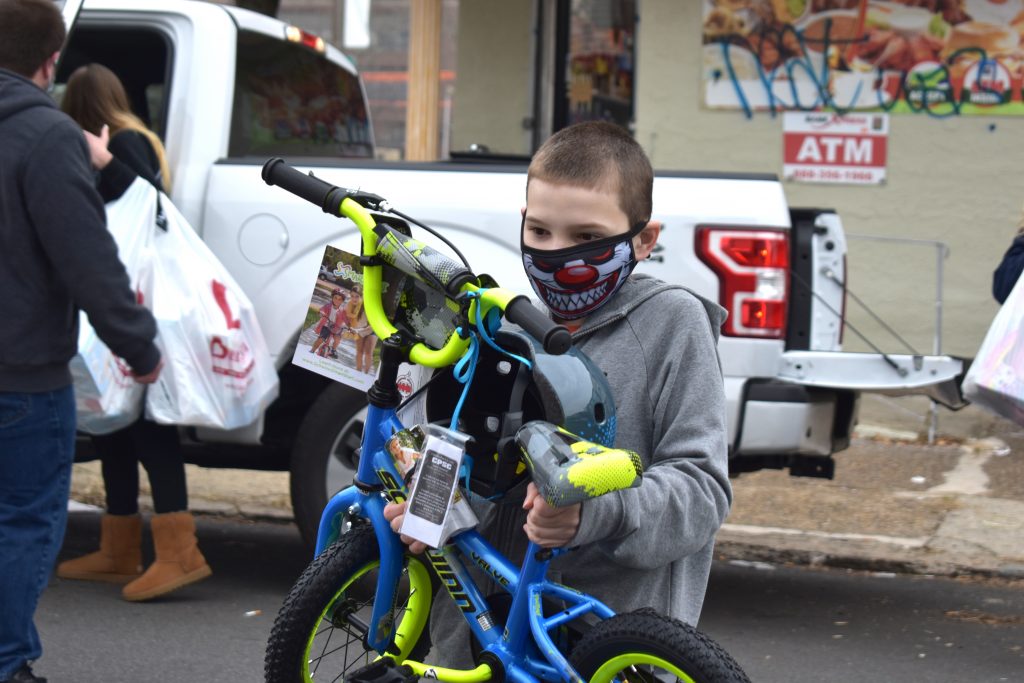 “We were (at the hospital) a couple days right before Thanksgiving,” said Kevin Corazo, the boys’ father. “And Brian said something to me that he was lucky that he’d be home for the holiday. I told him some kids were going to be in there all throughout the holidays and have it a lot worse that we do. I think that inspired him to choose CHOP.”

Brian began his mission by asking family, friends, teachers and classmates to donate a toy or money toward the cause of making a better Christmas for other kids. The intended recipients changed, as CHOP will not accept gifts this year due to the pandemic. So Brian was guided toward teaming up with Whitman Council’s annual drive, and the two powerhouses made quite an impact for local kids.

Brian collected toys and raised money to buy more gifts, which totaled more than 400 presents to contribute to Whitman Council’s drive as offices clogged up from wall-to-wall with bikes, dolls, games and other toys. Those gifts are being distributed to children in the area in the days leading up to Christmas Day.

“It just renews your faith in human nature,” said Mark Kapczynski, president of the board at Whitman Council. “Obviously he’s got great parents to raise a boy to do something like that. It’s just amazing and brings a tear to your eye. The things that people do for this organization and for this neighborhood … We’re fortunate. We really are.”

Brian’s parents were proud but not surprised of Brian’s will to do something great.

“We’re extremely proud,” said his mother, Katie. “Because he did it on his own. We didn’t ask him to do it.”

Brian said the loss of his grandfather more than a year ago also inspired him to do good in the community.

“My pop died a few years ago and I wanted to make him happy to be helping people in need,” Brian said. “But my teachers, my family and friends all helped.”

Whitman Council, which is a neighborhood advisory council funded by the Division of Housing and Community Development, completed its 18th annual Food and Toy Drive through donations from local supermarkets, bars, unions and the South Philly Review. Last year it distributed 93 Christmas baskets and toys to 230 children in the South Philly Community.

The efforts are led largely by Philadelphia Daily News sports writer Ed Barkowitz, who lives in the Whitman neighborhood. Barkowitz guest bartends each year at the Mifflin Tavern with retired sports writer Mike Kern in a fundraising effort to help spur the collection. This year, they placed donation boxes at 11 different local bars, pubs and restaurants.

“Even though people couldn’t sit down and you could only get take-out, the boxes were filled,” Barkowitz said. “People were coming in and making the extra effort. Mifflin Tavern and Moonshine Philly were especially generous.”

Barkowitz, who was helping drop off toys with his 12-year-old nephew Matt Pooler, said 2020 was the biggest collection they’ve had in 18 years.

“I’m always impressed by the generosity of the people in this neighborhood,” Barkowitz said. “There are people who are out of work who showed up with bags of toys, doing whatever they could. It’s really humbling.”

The biggest effort coming from an 11-year-old who just wanted to make other kids smile.

“(Brian) is 11 years old going on 25,” Barkowitz said with a laugh. “He’s got an old soul. These kids, when they get involved … It’s really encouraging to see how they take to it and how they consider others. It’s really amazing.”