Thousands of local residents will sleep a little more comfortably after a generous holiday donation.

The high school was the landing spot and distribution center for hundreds of boxes of brand new sleeping attire, which were donated by ROC Nation and Fashion Options through Half A Million Kids. The Holiday Pajama Giveaway handed out the sleepwear as long, but quickly-moving socially distanced lines moved through the school and into the spacious gymnasium.

“I’ve worked here for 11 years so I know a lot of the people and the alumni, so it was nice to see a lot of the families who might not have had the best year and provide something to them,” said Audenried Principal Josh Anderson. “Whether they really need it or not, it’s important that we stand together as a community.”

Half A Million Kids is an organization committed to finding permanent, loving homes for the approximately 1,600 foster children eligible for adoption in the Greater Philadelphia area. Part of this particular event was geared toward existing families who could use a little bit of help, especially during a tough economic year.

“Our main mission isn’t really to give out stuff. That just happens to be something we were gifted with so we do that,” said Half A Million Kids founder Leah Stauffer. “Our main mission is to do a major engagement and mobilization campaign of the region to help find families for the kids in foster care who are eligible for adoption. We’re usually out doing that, but because we had this gift, we are able to be here today.” 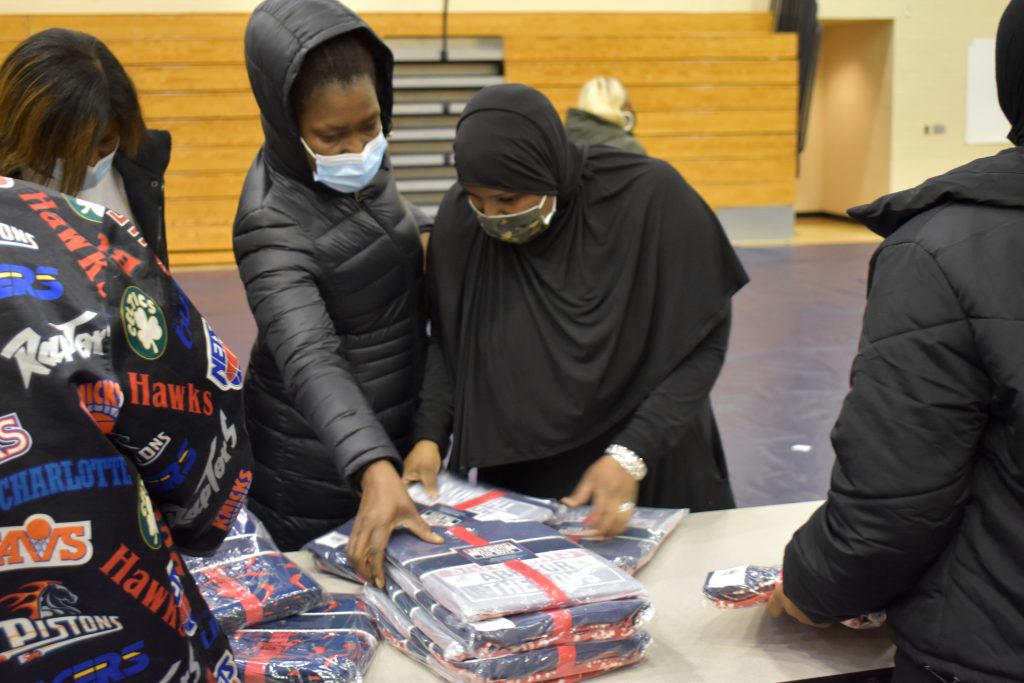 The smiles were evident during the last stage of the donation on both sides of the table. The hard work began earlier in the week, as a full 18-wheel tractor trailer delivered the bulk goods to the loading dock.

“It was 850 boxes, to my shock,” Stauffer said. “We hand unloaded them on Monday, but the good news is with teamwork, we got it done.”

The 850 boxes accounted for 10,000 pairs of fleece pajamas. About half were given to the Community Umbrella Agencies, which represent foster care agencies in Philadelphia. According to Stauffer, recipients included CUA Zones 1 (NET Community Care in Eastern North Philadelphia); Zone 7 (NET Care in North Central Philadelphia); and Zone 8 (Bethanna on Reed Street in South Philadelphia).

Universal Charter Schools invited members of its family of schools to pick up pajamas at Audenried.

“People were so grateful,” Stauffer said. “When you are distributing that kind of quantity, you get very caught up in the logistics and the volunteers and tables and social distancing. You forget until someone says something to you. A woman walked out with a bag of pajamas with tears in her eyes and said, ‘Thank you so much. This is such a blessing.’ It was true gratitude.”

Stauffer did have plenty of help as her goddaughter Sydney Dalton helped with a few long days of moving pajamas off of trucks and into the right hands. Dalton is a sophomore at the Academy Notre Dame de Namur in Villanova and was using a few community service hours to help her godmother. She recruited a few friends and classmates to join in the distribution the following day.

“We didn’t know the loading dock wasn’t big enough for the tractor trailer so we had to unload everything manually,” Dalton said with an exhausted laugh. “It was a lot of work but we got a bunch of people together and figured it out and it worked well.”

High school students at Audenried were able to reconnect with a few classmates and staff members, albeit briefly and socially-distanced. Students have been learning remotely through most of the pandemic.

“A lot of the students who attend here were able to come in and see their gym and know it’s still here,” Anderson said. “Hopefully, we will be returning sometime soon.”