Maybe atop some distant mountain lies the answer of how the Flyers have managed a 7-2-1 record through their first 10 games of the season.

Or maybe it’s a simple answer: They’re getting saves.

It’s a strange declaration in a town that has notoriously had trouble finding a stable goaltender since the days of Bernie Parent, Pelle Lindbergh and Ron Hextall. The age-old, well-documented goaltending snafu has caused migraines for management over the last three or four decades. Nowadays, it’s been as rocksteady as the late Ed Snider could have ever hoped for, like when he ordered a massive contract signing of free agent Ilya Bryzgalov in 2012.

The 2021 tandem of Carter Hart and Brian Elliott has almost made us forget about Bryzgalov and some of the other goaltending bumps along a very rocky road.

Hart, the young 22-year-old, is wise beyond his years and has seemed unflappable besides the rare stick-smashing incident following a 6-1 shellacking at the hands of the Boston Bruins a little over a week ago.

Since then, Hart has regained his smooth and smothering form, allowing a total of three goals in a pair of tight wins against the New Jersey Devils and New York Islanders as the Flyers surged to the top of the East Division. But it doesn’t end there. Elliott has been just as good in his three starts this season, winning them all, and giving the Flyers a fighter’s chance when they were bottled in their own zone for lengthy stretches.

Re-signing Elliott might be one of Chuck Fletcher’s sneakiest, best moves to date. If there’s one thing Philadelphia hockey fans loathe, it’s drama and controversy in the crease. Since Elliott arrived in 2017, he’s been a consummate professional no matter the role he is asked to embody.

In his first year as a starter here, the veteran goaltender backstopped the Flyers to a playoff appearance. He’s transitioned into backup life since then, spelling and mentoring Hart, who is the unquestioned future between the pipes. Elliott, 35, was re-signed in the offseason, with no intentions of unseating Hart for the No. 1 position, which has helped the younger goalie build more confidence and mature even more quickly.

“Moose is the ultimate gamer,” Flyers center Kevin Hayes said after scoring the overtime winner in the Flyers’ 4-3 victory over the Islanders on Sunday. “He’s technically a backup but he’s ready to play every single night. When his name is called, the whole team knows what he’s going to bring to the table and he’s an impressive guy. He works at his craft, and it shows on the ice.”

There were certainly flashier options available in free agency, but Fletcher smartly went with the sure thing and Elliott has repaid that confidence with a 3-0 record and a .932 save percentage in four appearances this season.

“He’s worked extremely hard in practice and he’s been ready,” Flyers coach Alain Vigneault said of Elliott after the win on Sunday. “Every time we’ve put him in, he’s played well. What you want from your goaltender is you want him to give you a chance, and there’s no doubt that Brian has done that for us every game that he’s played for us.”

It’s been even more important with how the Flyers have constantly been outshot this season. Through the weekend, the Flyers allowed the second-most shots per game (33.7) and have fired the second-fewest shots (23.6) at the opposition.

The Flyers have banked 15 out of a possible 20 points so far but will need to figure a few things out to keep that success trending.

But for once, goaltending isn’t the problem. It’s keeping them afloat. 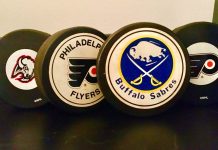 Struggling Sabres might be good trade partner for Flyers 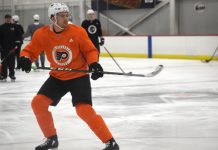 Flyers, NHL try to bounce back after rough weekend 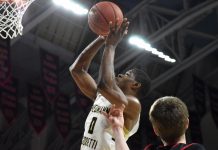