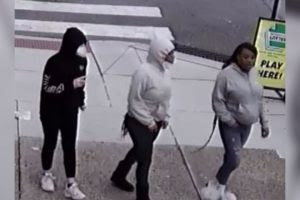 Three females are wanted for their involvement in an aggravated assault that occurred during a carjacking on Jan. 27 on the 2700 block of South Smedley Street, police said.

According to police, three unknown women were captured at 4:20 p.m. stalking a victim on the 2600 block of South Bancroft Street. The suspects followed the victim across the 1600 block of Oregon Avenue and onto Smedley Street, police said.

Police listed two of the suspects as Brianna Cruz-Gordon, 18, and Taniyah Watson, 17.

To view this video, visit the Philadelphia Police YouTube Channel or http://phillypolice.com/news. Anyone with information should contact the South Detective Division at 215-686-3013 or call 911.