The largest park in South Philly is receiving major contributions to enhance and beautify the area.

FDR Park at Broad Street and Pattison Avenue received $4.5 million in funding for the latest implementation of the FDR Park Master Plan, the Gateway Project.

“Families in South Philadelphia know and rely upon the fresh air and green space at FDR Park,” said City Councilmember Kenyatta Johnson, whose district includes FDR Park. “From family gatherings, to celebrations in the Boathouse or marathon training along the loop road, FDR has something for everyone. Thanks to the new funding announced today, FDR will be on the path to providing visitors 21st century park amenities in a majestic natural setting.”

The funding was announced by the City of Philadelphia, in partnership with the Pennsylvania Department of Conservation and Natural Resources, the Commonwealth’s Redevelopment Assistance Capital Program and the Fairmount Park Conservancy.

The first phase of the master plan will restore and transform a 5,500-square-foot guardhouse at the park’s Broad and Pattison entrance into a Welcome Center. It will include a courtyard with restrooms, a staffed information center and equipment rentals. It will also transform existing stables into a 4,000-square-foot cafe and 6,700-square-foot event space overlooking Pattison Lagoon. The Welcome Center project is funded through $3 million in State of Pennsylvania Redevelopment Assistance Capital Program grant funds and $1 million from the city’s capital budget.

“After a year when park visitation has soared, the need to invest in FDR Park has never been more clear,” said Mayor Jim Kenney. “As a child growing up, I spent all my summers here at the Lakes. The commitments being made to FDR Park today will deliver a 21st century park for future generations of Philadelphians to enjoy.”

Another phase of the project includes a signature playground and picnic area located in a grove of mature trees at the park. It will include high-quality, interactive play elements set within natural features next to the park’s Welcome Center.

The design of the play area is funded by a $250,000 grant from the state Department of Conservation and Natural Resources, which is matched by a $250,000 contribution from the Fairmount Park Conservancy.

“Throughout the master planning process, we learned that park-goers wanted more nature and more play at the Lakes,” said Maura McCarthy, executive director of Fairmount Park Conservancy. “The Pattison Playground will bring both to South Philadelphia, thanks to the generous support of the DCNR grant. Fairmount Park Conservancy has been committed to the future of FDR Park since day one, and we can’t wait for families to enjoy this one-of-a-kind playscape.” 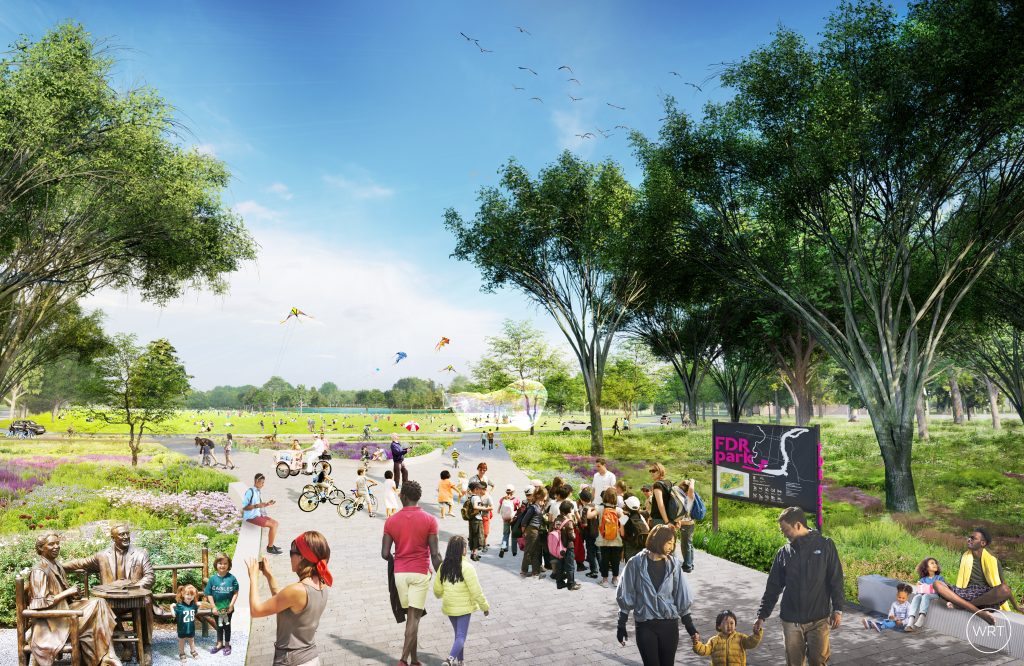 The announcement followed a year and a half of addressing recommendations from the FDR Park Master Plan, which included badly needed repaving of roads around the entire 348-acre park. According to officials, 58,911 square yards of loop road and parking lots were repaved last summer at a cost of $750,000. Bike lanes were also installed throughout the park.

Even more work went into recruiting more than 100 volunteers who help clean the park on weekends to keep it ready for the thousands of visitors that the park welcomes.

“We know from speaking with over 3,000 residents in seven languages that when families visit FDR, they want to stay longer and do more,” said Kathryn Ott Lovell, commissioner, Philadelphia Parks & Recreation. “The Welcome Center will provide the basic amenities that allow visitors to extend their stay, and so much more with dining, event and education space, and community workspaces.”