A large crowd of residents gathered in the Chickie’s & Pete’s parking lot on April 5 to speak out against a proposal that would bring a Parx Casino sports book inside the popular restaurant.

More than 100 residents — mostly from the Packer Park neighborhood — held signs and spoke in strong opposition of having gambling more prominent in their neighborhood.

“I wanted people to know what was going on,” said Barbara Capozzi, president of the Packer Park Neighborhood Association. “The legal process alone is probably not going to stop Pete (Ciarrocchi). It’s Parx (Casino), too. They’re a great organization but it’s all about money to them. This is our neighborhood, and there is no neighborhood in this city that fights harder for ourselves.”

Ciarrocchi, the chairman and CEO of Chickie’s & Pete’s Crab House and Sports Bar, which includes 16 locations in Pennsylvania and New Jersey, has argued previously that access to sports betting is easier than it has ever been and customers can place bets from just about anywhere using their phones. He has also argued he needs to compete with the new Live!

Casino and Hotel Philadelphia, which recently opened a few blocks away on the other side of Broad Street. 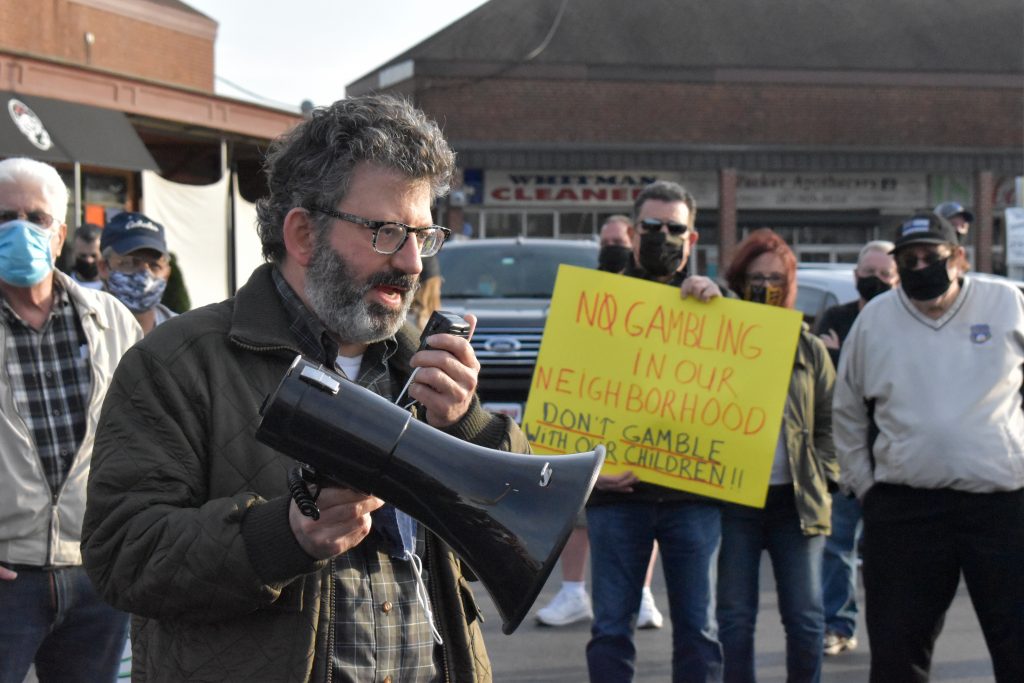 South Philly residents believe that designating an area and adding kiosks in the restaurant for sports betting will incentivize gamblers to frequent the establishment, gobble up scarce parking and cause crime in their area.

“When they leave here, there will be nothing in their pockets,” said Packer Park Civic Association board member Rob Rabena. “They’re going to look in cars and break in. A lot of us lived here for a long time. We have to draw the line and say enough is enough. We don’t want gamblers 50 feet from these houses right here.”

Homemade signs at the rally said, “Gambling Destroys Families”, “Crab Fries – Yes, Gambling – No” and “Greedy Petey”. A small string band played songs on the outskirts of the parking lot, and fliers were handed out to a growing group of people in opposition to the gambling site.

Parx’ application seeks to move its off-track betting site at the South Philadelphia Turf Club at 700 Packer Ave. about nine blocks west to lease a 2,600-square-foot area inside Chickie’s & Pete’s, which anchors the Packer Park Shopping Center. The establishment says it would designate 59 seats inside Chickie’s & Pete’s for the purpose of sports betting and pari-mutuel wagering space, which would include kiosks, tellers and three security guards. The sports book would operate only during restaurant hours, and Parx officials say most activity would wrap up close to midnight on weekends, when the bar is open until 2 a.m. No additional signage or additional entrances are included in the application, and no additional construction is permitted. 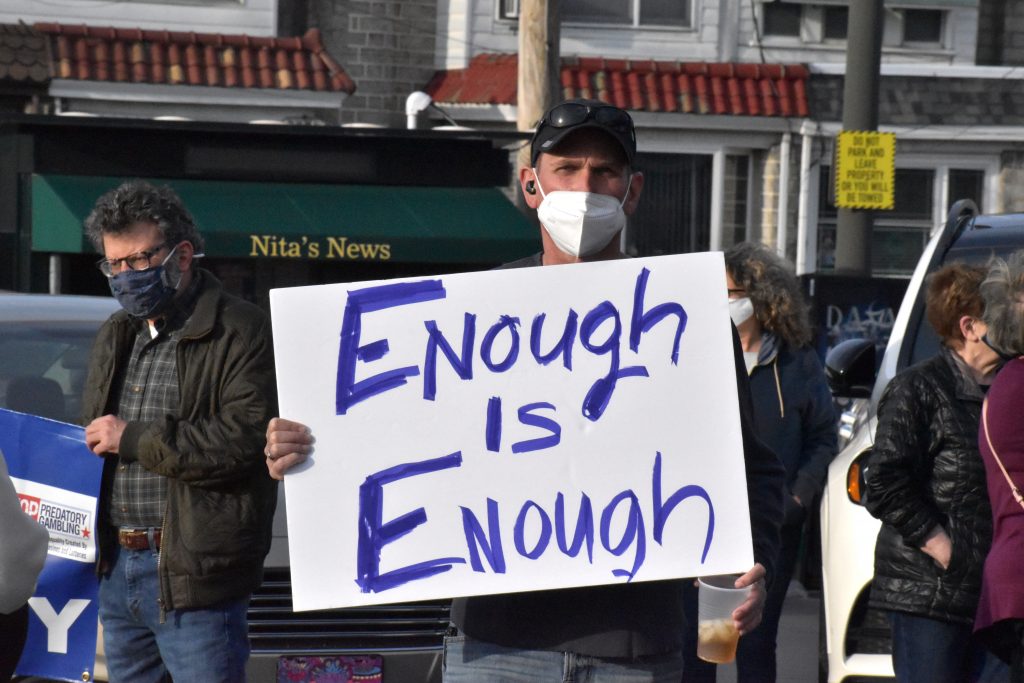 The application is being heard on several levels including an appeal with the Zoning Board of Adjustment. The group has also filed a petition to intervene in hearings before the State Racing Commission and the State Gaming Commission for obtaining gambling licenses.

“There are some powerful people involved and big governments involved and a ton of money,” Boni said. “Sometimes, those things conspire to do bad things. But all we can do is try our hardest. We have a couple of rocks in our slingshot. Once in a while, you take that slingshot and whip it around and the giant falls down.” 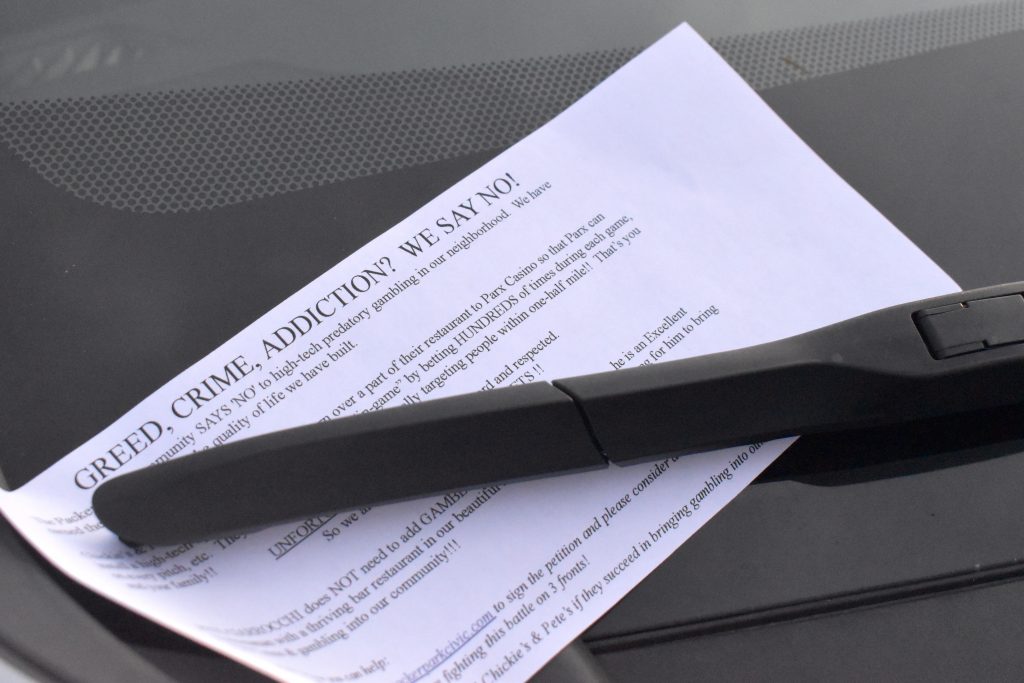 Ciarrocchi has partnered with Parx for 11 years at the Bucks County casino, and the two also do business via a sports book at the Chickie’s & Pete’s location in Egg Harbor Township.

“He’s an excellent businessman, but he does not need gambling here to be a success,” Capozzi said. “He even succeeded during COVID. He scaled down the menu and packaged things for easy pickup. I got take-out two times a week from here, and it was perfect. He’s smart enough and he knows what to do to be successful. He does not need gambling. How much money do you need at a certain point?”

Some community members said they would boycott the restaurant if the decision goes through.

“It’s very disheartening when the last good neighborhood in the city can’t defend itself,” Capozzi said.