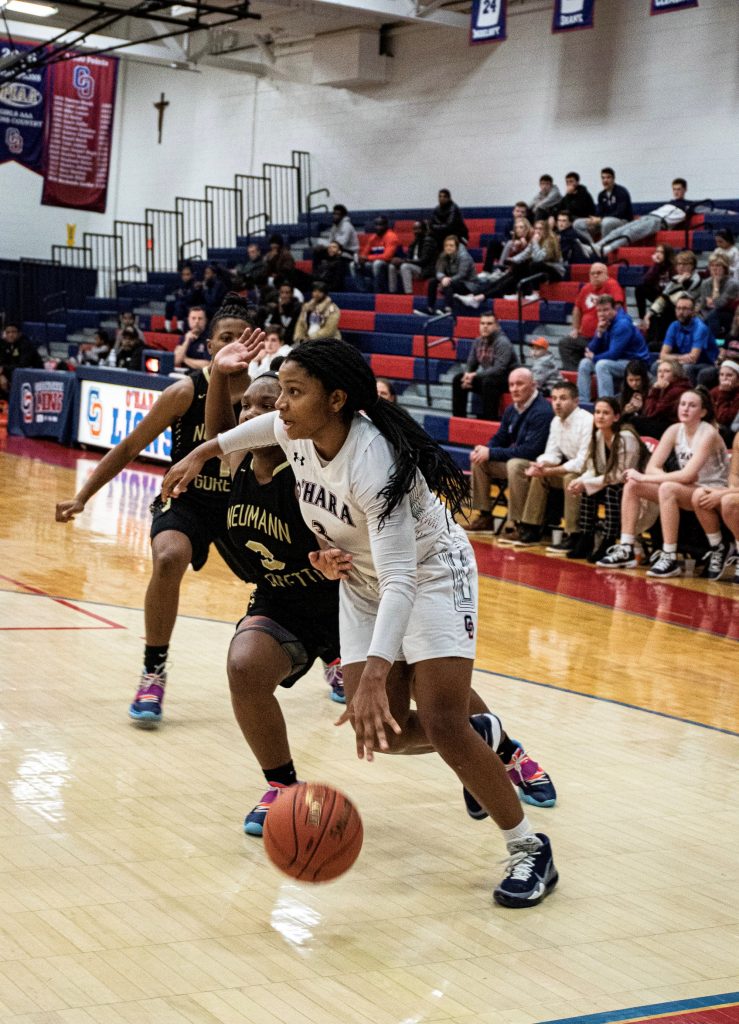 The alarm clock goes off pretty early in Amaris Baker’s house, although she really doesn’t need one.

The Whitman neighborhood resident considers herself an early riser, and that’s how she gains the edge on her competition. It started at age 6, when she was barely able to dribble a basketball and wasn’t being taken seriously on the basketball courts.

“I would play basketball at Murphy Recreation Center at 4th and Shunk (streets) but it was all guys and I was the only girl there,” Baker, now a high school senior, recalled. “They would never pass me the ball. And after games, I would be upset and cried to my parents that they weren’t passing it to me. It just motivated me to start working harder and give them a reason to give me the ball.”

Amaris persuaded her dad Gabriel to wake up at 6 a.m. and walk over to Murphy to shoot free throws, run and work on skills. It became an everyday occurrence.

“That court was my go-to place,” she said. “It’s like my second home. I really love basketball so I wanted to do whatever it took to get better.”

Thousands of hours have been spent at that court as the sun began its daily journey over the houses of South Philly. And Amaris Baker did whatever it took to get better. Just a few weeks ago, she and the Cardinal O’Hara High School girls basketball team won the PIAA Class 5A state championship game in a 51-27 blowout win over defending champ Chartiers Valley.

It was the first state championship for Cardinal O’Hara in school history.

“It was a great journey and a great way to end things after everything that went on last year,” Baker said. 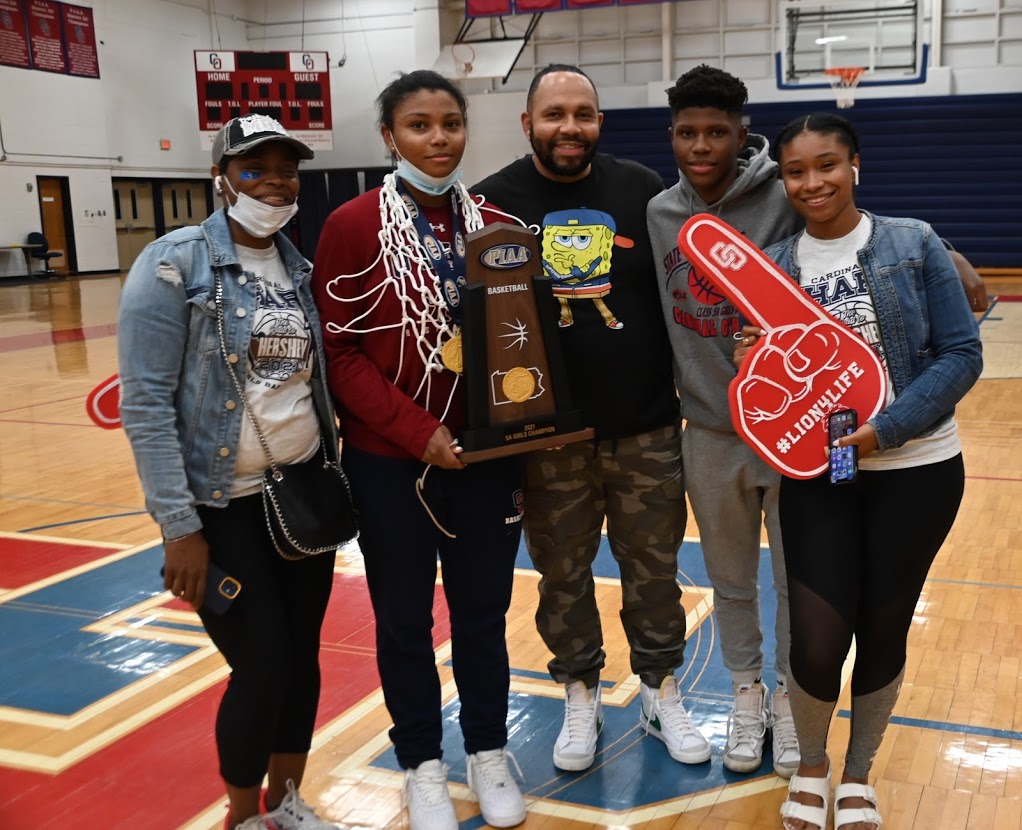 O’Hara’s 2019-20 season ended abruptly during the state tournament as COVID-19 overtook the country. The Lions were 11-6 and had won the first three games of their state tournament journey before the season was canceled due to the pandemic, leaving an empty feeling in the Lions’ locker room.

“We had a lot of confidence that we were going to go to the championship,” Baker said. “Then when COVID happened, it was rough and heartbreaking for our seniors. We were on a mission. But it made us more hungry for this year. We wanted it so bad.”

Once they returned this season, the Lions went 15-4, with three of those losses coming to other state champions in Archbishop Wood (Class 4A) and West Catholic (3A). Baker made even more history this season as she reached 1,000 career points, joining her coach, Chrissie Doogan, as one of only 15 players in school history to do so.

“It was a stress relief,” Baker said with a laugh. “After the first game, my coaches told me how far I was and I wish they never told me because I was counting down in the back of my head. But once I did, I felt a whole lot better. I accomplished it, but was just playing the role of doing what it takes to win.”

Part of the calming influence came from Doogan herself.

“We talked about it last year,” said Baker, who earned second-team All-Catholic honors for the second straight year. “She said not to worry about it. She told me I’m going to get 1K and my name is going to be on that banner. She told me to just keep doing what I was doing and don’t think about it too much.”

But she’s thought a lot about her future. Baker received a full athletic scholarship to Kennesaw State in Georgia. She said she preferred to travel far away from home for independence.

“I never wanted to follow a trend and play in the Big 5 in the area,” Baker said. “I always wanted to be different and wanted to go farther. Plus, I’m going to be an adult and I can’t be around my parents forever. I need to train myself to not be around them.” 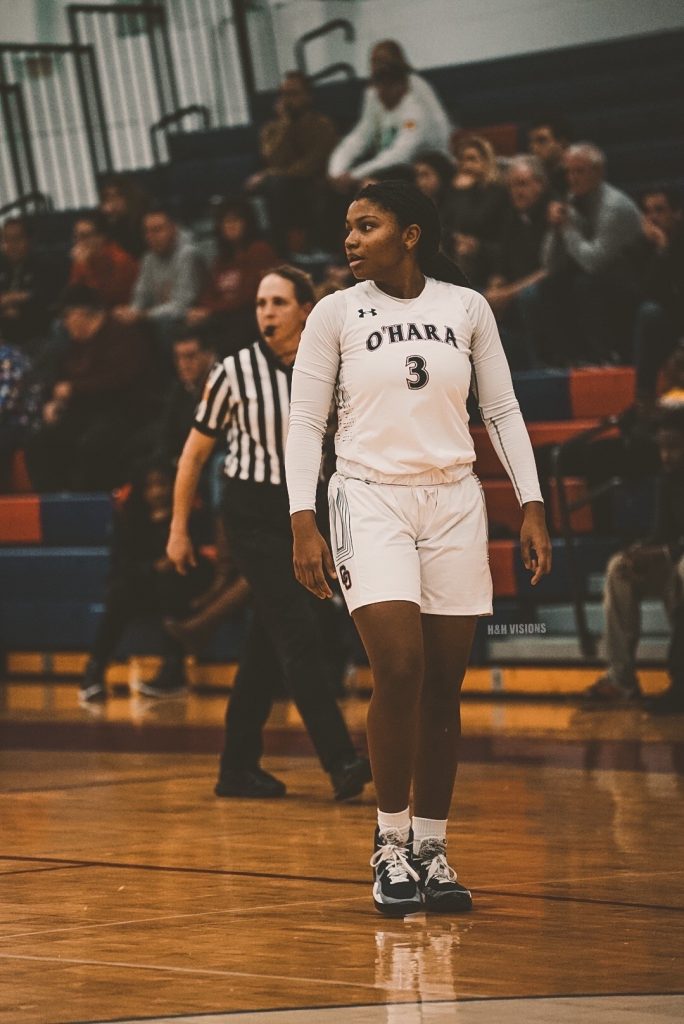 Baker has an uncle who lives in Georgia so the family won’t be too far away. Her new family is already welcoming her in.

“(Kennesaw State) really wanted me,” Baker said. “I really like the coaches, and they are already checking in on me every day. They are very family oriented and they have everything I want there. And the weather is really great, too.”

Fitting in should be easy. When Baker transferred to Cardinal O’Hara the summer before her sophomore year, she was nervous to make new friends. Playing basketball sped up the process.

“When you’re new, it can be pretty tough,” Baker said. “But when you play basketball, people will get to know you. You’re playing one of the biggest sports at the school. So it was rough for maybe a month, but once the season started, it was great.”

It’s been nothing but fun since then. Baker will graduate in the spring and will miss the long, early car rides to Cardinal O’’Hara with her father as both have continued to rise early at 6 a.m.

Dad will continue to run BakerHoops, a basketball performance company and private AAU club that was created for Amaris. It takes place at Murphy Recreation Center, although the practice times are more suitable than 6 a.m.

“It’s a really great club,” Baker said. “It’s very organized, and we include all families. It’s very loving and family oriented. But no, practices are not at 6 a.m.”