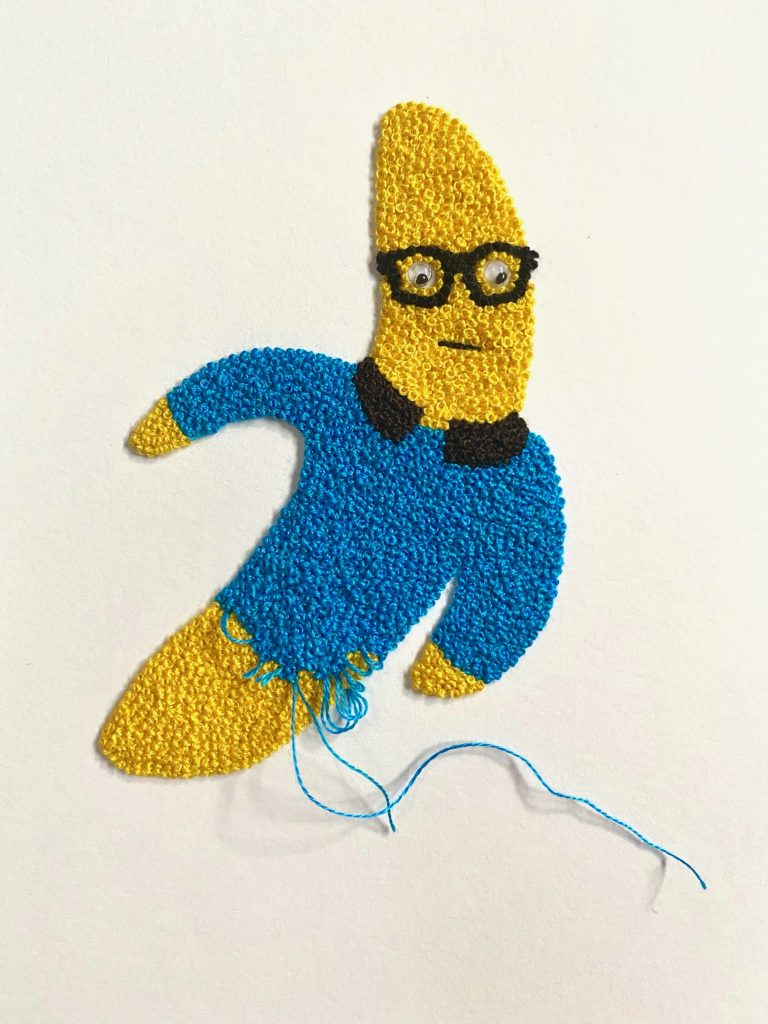 Like everybody else’s lives over the last year, Kelly Kozma’s life has been disrupted by the pandemic. But for Kozma, COVID simply added insult to injury. It’s been a rough go for Kozma in the last few years, a stretch that began with some “grief and trauma” that started back in 2017. But with the help of her 4-year-old son, she found a new, child-like style of art that helped her power through. Kozma brought much of that art to Paradigm Gallery + Studio last Friday, the first day of her exhibition there. Kozma chatted with SPR by phone on the day of the exhibition’s opening to provide readers with a preview of what to expect. The exhibition will be on display until June 20. 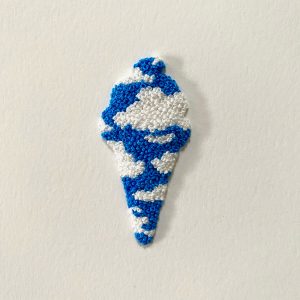 What can viewers expect to see from Rerouting?

This series is chronicling my journey of processing some grief and trauma that happened in 2017 and what I did was use my art and especially the technique of embroidery and french knotting to kind of fill the holes that were left after experiencing several losses in a row. I guess the time-honored tradition of embroidery, having a history of storytelling and mending and strengthening kind of felt like it lended itself in a perfect way for me to begin that healing process. What started as a necessity shifted over time became more of a want. So when I started the collection, it felt like my only safe place and something I completely depended on and as my collection developed, my art kind of took effect. The healing process was able to begin and toward the end of the collection you can see a shift from somber work to really fun, energetic and playful work as I was able to move through some of that grief.

What I’m hoping people get out of it is that we can’t tell a viewer how to feel. They’re going to experience it in their own way. What I’m hoping is people see the work and relate their own high and low experiences in life to it. Maybe they haven’t experienced the same losses or the same traumatic things that I have, but we all as human beings – it’s just part of life – is ups and downs. Especially after this past year and the pandemic. So I’m hoping they can relate to it in some way and find some solace in that. And also just really enjoy it. Because as I said, when you move through the collection, there’s a lot of color, there’s a lot of energy and the floors are covered, there’s a lot of paintings on the walls and I just really want people to move through and kind of experience the highs and lows. Starting at a difficult point and working your way through it with whatever your coping mechanism is. For me it was my art, and for other people it could be gardening, cooking, writing, meditating, exercising, whatever. But my goal was kind of to show how I experienced [and got] through it. And I hope people can connect through it in that way.

The press release says that in previous works your stitching operated as an “accent,” but in this exhibition “it takes center stage.” What do you mean by this?

[Stitching] has been a big part of my work for the past decade, but before it was kind of more of a functionality. I was deconstructing paper and sewing it back together, which still appears in this show as well. But it was more about the stitching acting as having a function or an accent on top of a drawing or a painting. I think what changed with this collection is I just wanted to cover and fill. Because doing the french knots and doing the embroidery became such a meditative practice. I would just kind of sit there and zen out making these hundreds of thousands of french knots so it became something that was really enjoyable. I just wanted to fill everything up because I was at a place where I felt very empty, so I think that was the catalyst for the stitching taking center stage. 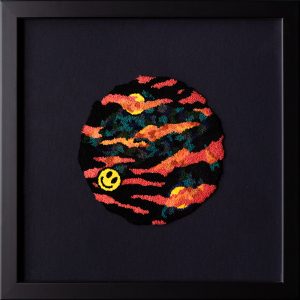 French knots aren’t something I was familiar with. Can you explain what that is? Apparently it’s very time consuming?

It is! So all of my embroidery is on paper, which also kind of separates it from some traditional embroidery. So I use a Sharpal to punch the holes and I do the holes first. So the needle comes up through the paper and the thread gets wrapped around the needle a few times and then goes back down through the same hole. And that action creates a tiny little knot that’s probably 1/32nd of an inch. They’re very tiny, not much bigger than a pen marking. So they are tiny. And when you combine enough in the same area it kind of makes a rug-like pattern. So some people will just do one or two here or there as accents. What I did was cover the entire surface so that you don’t even realize that it’s on paper. You just see a miniature, rug-like structure.

How did you develop your whimsical, childlike style for your art? Where did that come from?

So that I can attribute to my 4-year-old son. I’ve always been drawn to bright colors and light-hearted imagery. But I think in the past couple years, not even when I was doing my own work, but when I was sitting down with him and drawing with Crayola markers and using stickers, it kind of made me remember what it was like to have that feeling as a child. To cover everything up and not take it too seriously. I think for a long time early in my career, I felt like I had to use sophisticated materials and have everything be super elevated and was kind of in a way shunning out the joy. I want to say in these past couple years making these drawings with him and we could be doing like 25 a day, these become less precious and really when you’re spontaneous, that’s where the joy comes out. That’s where I started thinking ‘well, what if I incorporate stickers into my fine artwork?’ Or ‘what if I stitch a banana with googly eyes?’ It made me really happy so I tried not to question it too much and just kind of go with my gut because I think especially after this year we all need some of that and need to be reminded of the childhood whimsy that lives within and it’s OK to let it out. We don’t always have to be so serious.

How has the pandemic affected your ability to create art if at all?

I think a big part of it is that I was supposed to have this show last May in 2020 and I made the decision in March that I wanted to postpone it. As hard as this year has been and my son was home with me and my life and my timeline shifted, I think it was a blessing in some ways because I had an extra 365 to think about the work, think about what it meant to me, and in this time create like over 50 pieces that wouldn’t have been in the show last year. There are so many tragic things that have happened in the past year and so many people have suffered in so many different ways, and I’m not trying to make light of that at all. But I do think there were some advantages to having this time and slowing us down and just kind of giving me some time to process what I wanted to say and what the work meant to me. So it was a little difficult with my high-energy 4-year-old, but we made it work and he’s very much a little artist himself. We come to my studio in my detached garage from my house, work together and somehow power through.

“Rerouting” will be open for regular weekend hours with limited capacity and is available to view by private appointment during the week. For those interested in viewing the show from home, a twin exhibition will be held online at paradigmarts.org.