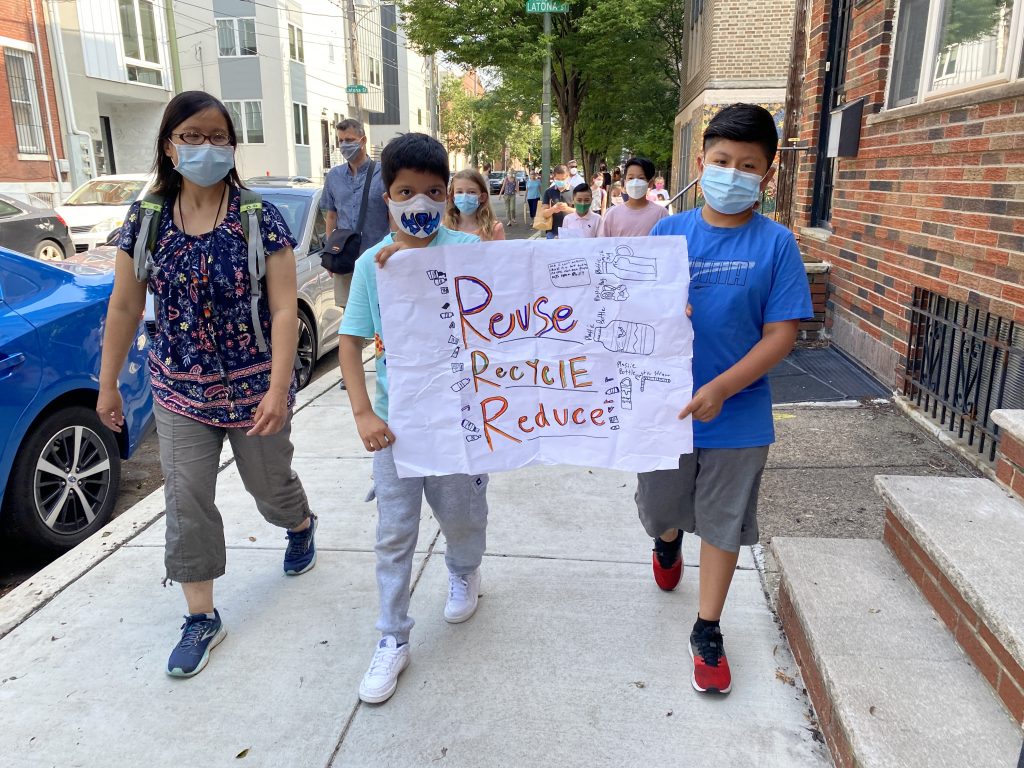 When Andrew Jackson School second-grade teacher Kate Atkins asked her class what issues they were most concerned about in the world, the schoolchildren came up with quite a list. Pollution, climate change, Black Lives Matter, homelessness, COVID, animal welfare and even financial insecurity were among the issues her class cared the most about.

That question was just the very beginning of Atkins’ class’ Need in Deed project, a project named after a nonprofit organization that helps teachers conduct service learning projects with their students.

“We started back in March with the kids making a huge list of issues they were concerned about in the world,” said Atkins. “Then the kids researched them and made PowerPoint presentations and shared what they learned with each other.”

After the presentations, Atkins’ class held a two-and-a-half-day Zoom debate about which issue the class should focus on for the next stage of the project – the part where the class as a group does something to raise awareness for their chosen topic.

Pollution, climate change and animal welfare received the most votes in that debate. So the class decided to combine them all for their chosen issue.

“That’s when we ended on pollution and climate change and how it hurts animals,” said Atkins.

The group ended up protesting plastic specifically, since its use has an adverse effect on all three issues.

Second-grader Michael Lin was worried about plastic’s effect on birds in particular.

“Birds can die if they eat plastic,” he told SPR.

Lin, like many in the class, was supportive of Philadelphia’s ban on plastic bags, which was passed by City Council in December 2019.

However, just one week after the city’s ban was passed by Council, Senate Majority Leader Jake Corman inserted language into the state’s fiscal code that prohibits state municipalities from regulating single-use plastic bags and other containers for one year, according to the Morning Call.

Then in December of last year, the city announced the ban would be delayed another six months due to COVID-19 concerns. Currently, the ban is scheduled to go into effect on July 1.

Lin’s classmate, Lucy DiPiazza, is also in favor of Philadelphia’s plastic bag ban. SPR asked her why Corman would want to ban the plastic bag ban in the first place.

“I think that plastic gives people more money so that they can become richer,” said Piazza. “It’s probably greed. If they’re greedy then they don’t want us to ban it.”

In the past, Corman has cited two studies – one by the Legislative Budget and Finance Committee and another by the Independent Fiscal Office – that show “that policies that restrict, add fees to, or ban single-use plastic bags could negatively impact the environment and cost consumers millions annually,” said Corman’s office in a press release.

“The desire of local municipalities to ban the use of single-use plastic bags cannot be made in a vacuum,” Corman said. “Many of the preconceived notions about single-use plastic bags are not based in the reality of customer re-usage of the bags or the manufacturing process that continues to make improvements in order to reduce its environmental footprint.”

Kitai Ware, another one of Atkins’ students, said that many sea turtles die by consuming plastic bags they think are jellyfish.

“Then they get sick and die,” said Ware.

Billy Gontkoski, another second-grader, said that fishing is one of his favorite pastimes. He is afraid that if more fish die, there’d be fewer to catch.

“On Tuesday we found seven bags of plastic in the park,” he said. “You can imagine that going into the sea.”

Another student, Esme Hollander, called SPR to alert the paper about the protest. According to Hollander and Atkins, once the class decided on the topic of how pollution affects animals, they had a discussion about how to go about raising awareness for the issue.

“We had ideas and we decided to do a protest,” said Hollander.

On Tuesday and Thursday of last week, Atkins’ students took to the streets to encourage people to stop using plastic. They chanted, “Hey hey, ho ho, plastic bags have got to go,” and, “Don’t be a plastic fool, go get a reusable,” while carrying signs that said, “NO MORE PLASTIC,” “PLASTIC KILLS ANIMALS” and “Reuse, Recycle, Reduce.”

They marched from Jackson School, 1213 S. 12th St., to Columbus Park to Capitolo Playground before making it back to Jackson School – but not before completing a park cleanup at Capitolo, ridding the public space from plastic and other litter.