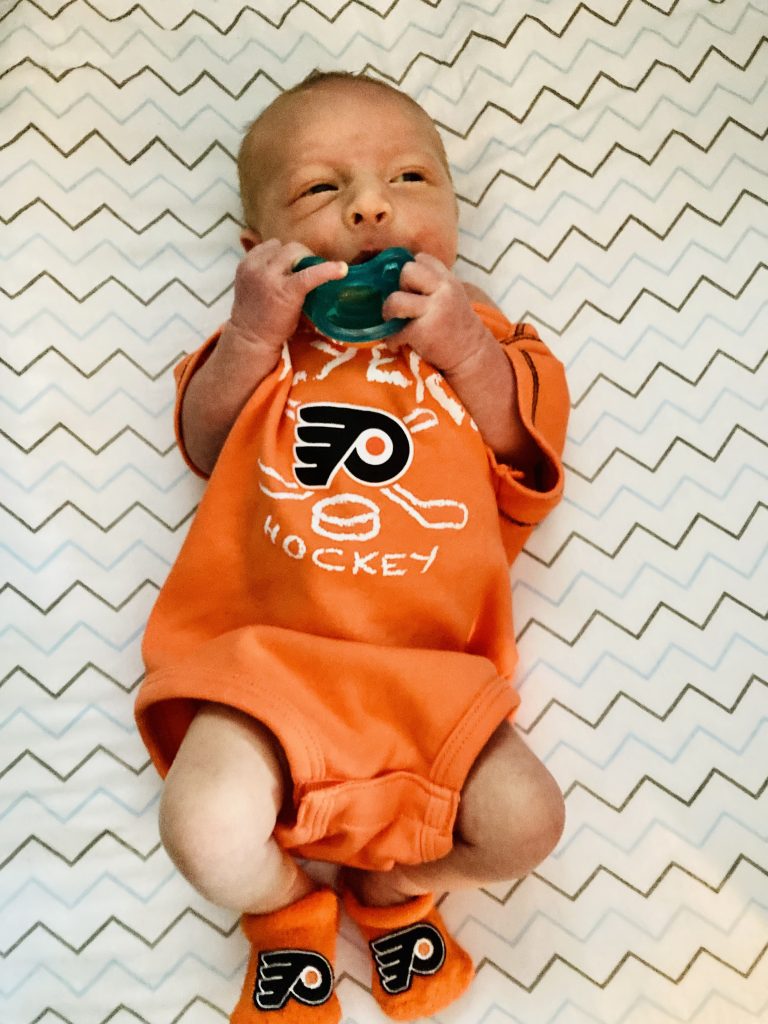 There’s a sucker born every minute. And this one is mine.

On July 6, we welcomed Joseph William Zimmaro to the world after a dramatic appearance, helped along by angels on the medical staff that assured his safe delivery after a few scary moments. Surely a secondary assist from a few angels above.

At 6:31 p.m. he was born. He took his first breath at 6:34. I think. It was tough to see the clock through all the tears caused by nervousness, and then finally, bliss. None of it possible without the strength and courage of my warrior wife, Jill. Both are doing well now.

Little Joey doesn’t know, nor will remember, those brief moments of trauma he endured in the operating room. But that’s OK. He has the rest of his life to suffer.

(We shift to a lighter mood, remembering this is a hockey column.)

If Joey is anything like his dad, he likely has decades of hockey viewing frustration ahead as a doomed fan of the Flyers.

This new title certainly won’t be forced upon him, nor will be the sport that his pop so intensely adores. But kids pick up habits from their surroundings and it’s pretty likely we have many games to watch in our future, just like I did with my old man.

I’ve lived my whole life without seeing the Philadelphia Flyers win a Stanley Cup, but I’m told it happened (twice) just a few years before I arrived.

I’ve come close. One of my most vivid memories as a 9-year-old in my living room was seeing Murray Craven score a 5-on-3 goal to put the Flyers up 1-0 on the Edmonton Oilers in Game 7 of the 1987 Stanley Cup Final. Craven took a pass from Pelle Eklund and fired from a sharp angle off of Grant Fuhr’s skate into the net. And it was downhill from there as the dynasty Oilers prevailed 3-1 and the names of hockey legends were added to the Stanley Cup a third time.

To their credit, the Flyers have been back to the Stanley Cup Final two more times in my life. They got swept as favorites by the Detroit Red Wings in 1997 and they lost in six games to the Chicago Blackhawks in 2010 after Patrick Kane scored one of the weirdest Cup-clinching overtime winners.

In total, the Flyers have been the bridesmaid six times since their second championship in 1975. And over the last decade, they’ve been left off the guest list altogether all too frequently, missing the postseason five out of the last nine years.

If there’s one thing Flyers fans have going for them, it’s that the organization wants to win and has traditionally done everything in its power to capture another championship. This can’t be said about all franchises, as some might have monetary limitations or other hindrances.

The Flyers always seemed to go for it, especially when Ed Snider was still here. It led to inspiring, exciting postseason runs and, at times, the organization’s shortcomings, as they often gave up on young players and made bad decisions. Is it a good time to mention that Ilya Bryzgalov gets paid until 2027?

But that’s the cost of doing business and the Flyers were always willing to spend the big bucks to be in the conversation. Snider was always there to pick up the tab to push the Flyers back into contention.

A new level of frustration arrived in the salary cap era, as it’s not as easy to write blank checks to lure in high-profile free agents or pay your own stars well beyond their worth. The 2021-22 Flyers must first clean up their messes if they plan to create new ones.

It’s now been reported that Jake Voracek and his $8.25 million contract are on the trading block and the Flyers could lose another significant player in the expansion draft later this month. Claude Giroux has just one year left on his $8.275 million contract and a franchise-altering decision on the longest-serving captain in team history could be upon us shortly.

Whichever way the Flyers want to go with their roster, they will likely end up in the playoffs over the next few years whether it’s one last push by an aging veteran core or a coming-of-age moment by the next round of young players. Heck, half the teams in the league make the playoffs so they could get in just by riding Carter Hart.

Making the playoffs is great, but the truth is this group of Flyers probably just aren’t good enough to go all the way and that’s what really counts.

The Montreal Canadiens reinforced the realization that middle-of-the-pack teams can get hot and make a run, but they ultimately fall short in the final round. Just as we saw 11 years ago when Kane snuck the puck past Michael Leighton in OT.

If the Flyers ever truly attempt to scale the mountain and sit on top, they may need to bite the bullet and start over, as frustrating as that sounds. It will take time and patience. Right now, little Joey has a lot of both and hopefully he doesn’t have to wait more than 43 years like his dad to finally see a Flyers parade. Hopefully we can stand on Broad Street together.

I truly believe that day will eventually come. But I’ve been a sucker before.