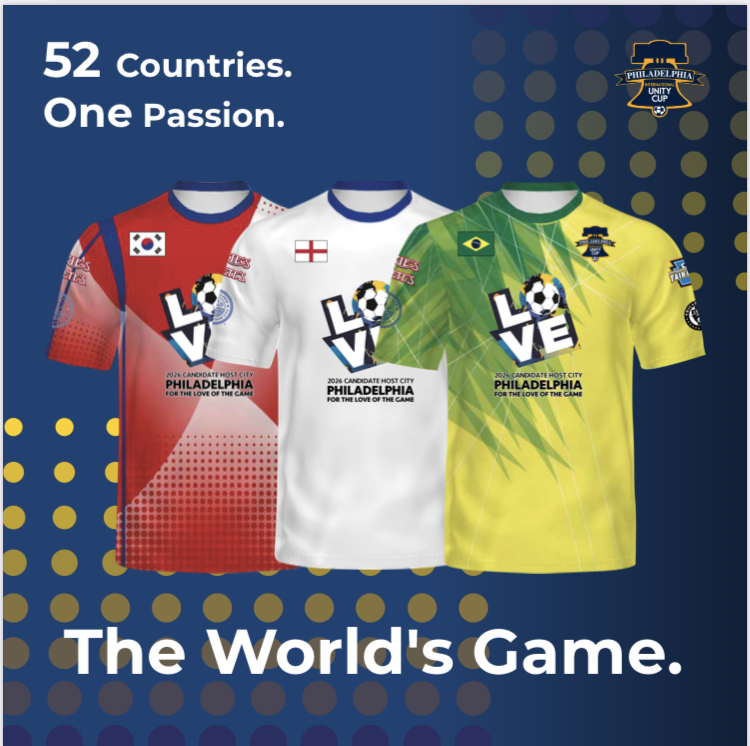 A major international soccer tournament will attempt to create unity among city residents while showcasing Philadelphia as a premier location for the 2026 World Cup.

The Philadelphia International Unity Cup will begin on Aug. 27, as 52 teams representing countries from all over the world will take part in a World Cup-style tournament at various locations around Philadelphia, including two separate fields in South Philly.

The Unity Cup started in 2016 and is getting set for its fifth tournament after having to postpone last year’s edition due to the pandemic. Held over several months, and open to any foreign-born resident or Philadelphia native, the Unity Cup is represented by nations from five continents and aims to unite the city’s neighborhoods and celebrates its diverse immigrant communities through soccer.

Philadelphia was the first American city to hold this style of tournament, and other American cities have begun to replicate the event since its inception five years ago. The tournament kicks off on Aug. 27 in South Philadelphia, as the United States takes on England at Smith Playground at 2100 S. 24th St. Games are free to attend.

Kenney has also been vocal about the city’s bid to host World Cup games when the sport’s largest and most prestigious tournament takes place in North America in 2026. Philadelphia is among 22 cities in the United States, Canada and Mexico that is under consideration to host World Cup games. According to FIFA, 16 cities will be appointed by early 2022 to be official venues.

Kenney is using the Unity Cup to show the love and enthusiasm that the city has for big soccer tournaments, in hopes of reeling in the big one in five years. This year’s Unity Cup jersey will display Philadelphia’s bid to host FIFA World Cup 2026 as the primary logo on all 52 team jerseys, which represent each individual nation participating in the tournament.

“The Unity Cup is a true celebration of Philadelphia’s diversity and our love of soccer, both of which are strengths within our bid,” Kenney said. “Visually highlighting our desire to bring FIFA World Cup 2026 to Philadelphia on this year’s jerseys further demonstrates our commitment to winning this bid. The Unity Cup was inspired by the power of the World Cup, especially in how it unifies communities around the world. I have no doubt that if Philadelphia is selected to be a host city, the world will see how diverse, welcoming and passionate this city is. This event is an important part of our continued journey toward greater equity and inclusivity as we focus on growing the game across Philadelphia and prepare to welcome FIFA and U.S. Soccer in the fall.”

South Philly will see its fair share of the Unity Cup, as Smith Playground and the South Philly Super Site at 10th and Bigler streets will combine to host 14 games.

Five games are scheduled at the South Philly Super Site on the final day of round-robin play. The Democratic Republic of the Congo will face South Korea at 10 a.m., followed by Brazil vs. Lithuania at noon; Senegal vs. Palestine at 2:30 p.m.; Honduras vs. Romania at 4:30 p.m. and Ethiopia vs. Turkey at 7 p.m.

Other venues in the city hosting games over the coming months are James Ramp Playground at 3300 Solly Ave. in the Northeast; the Germantown Super Site at 1199 E. Sedgwick St.; Simon Gratz Super Site at 1798 W. Hunting Park Ave.; and the Northeast Super Site at 1601 Cottman Ave. The final will be at Subaru Park, home of the Philadelphia Union.

A full schedule is available online at https://unitycup.phila.gov/schedule/.

“The Unity Cup brings together the best of Philadelphia – our diverse communities and our passion for sports,” said Kathryn Ott Lovell, commissioner of the Department of Parks and Recreation. “The 2021 Unity Cup is a much-needed opportunity for Philadealphians to come together to reflect on our shared civic pride and love for this city.”