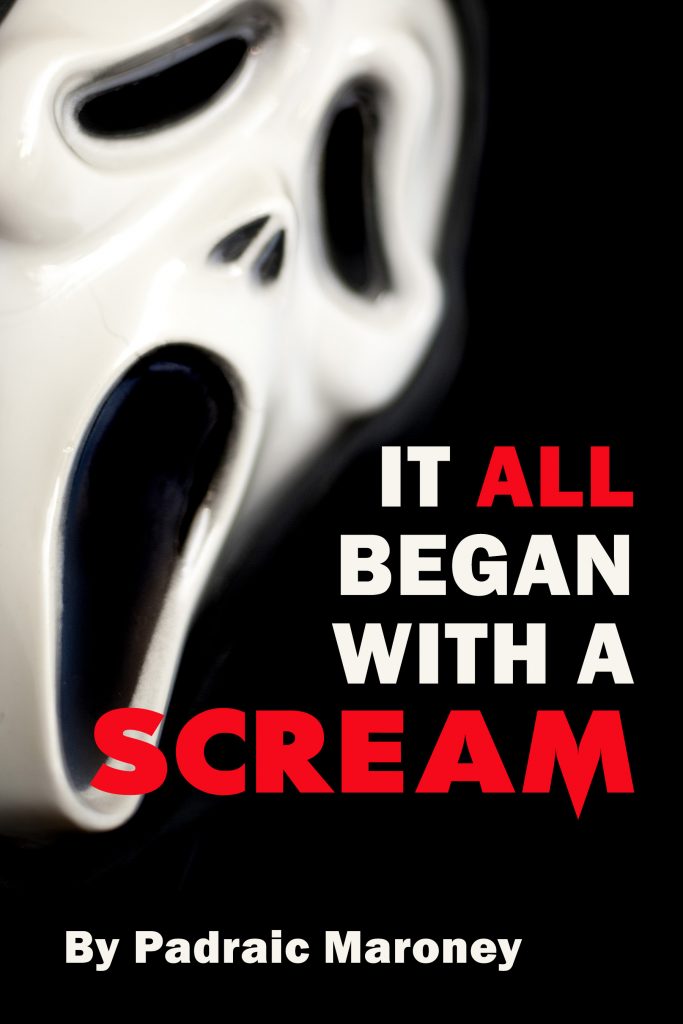 Writing a book about his favorite movie turned out to be a real scream for South Philly author Padraic Maroney.

It’s been many years since Maroney begged his older brother to take him to the movie to see one of Wes Craven’s “Scream” slasher films, which starred Neve Campbell, Courteney Cox, David Arquette, Drew Barrymore and several other high-profile actors.

It was a must-see movie at the time and one that still resonates deeply with Maroney since the first Scream movie was released a quarter of a century ago.

“Scream has always kind of been entangled but I can’t quite say what it was about the movie itself,” said Maroney, a Bella Vista resident. “There was something about it that made me want to be a writer and it was actually because of the book that I did become a writer.”

Maroney began as an entertainment journalist in high school for the Bucks County Courier Times’ Reality section, which is written by teenagers. From there, he studied communications and media relations at West Chester University. He then decided to take a stab at writing a book called “It All Began with a Scream,” providing a deep-dive into behind-the-scenes stories of the making of the movie franchise. He approached it with full ambition, interviewing more than 30 cast and staff members from the Scream movie series.

“I always get these ideas and underestimate how much work it’s going to take,” Maroney said with a laugh. “But since it was my first book, I was looking at it with rose-tinted glasses. I had done interviews before but I didn’t know everything that had gone into writing a book.”

It all paid off, as Maroney’s book is set to launch on Aug. 24. Published by Bearmanor Media, “It All Began with a Scream” will be available for purchase on Kindle and Amazon Books.

Readers can look forward to stories from actors and on-set staff about the interactions, altercations and turmoil of filming the popular movie.

“I wanted to give a behind-the-scenes look to the readers of what it took to make the movies that we all love as horror fans,” Maroney said. “A lot of people from the movie thought Wes Craven might get fired while shooting the Drew Barrymore opening because the Weinstein brothers were not happy with the mask and some of the other stuff they were seeing. They were really hammering him during the first movie.”

There are also stories of script leaks during the second movie and lawsuits that took place. Maroney also spoke with casting directors who spilled the beans of who almost was in the movie.

Some of the actors interviewed for the book include Liev Schreiber, Skeet Ulrich, Rose McGowan, Rory Culkin, Nico Tortorella and Roger Jackson, who famously voiced Ghostface. Many producers and other surprises are included.

“Everyone was just so generous with their time and so pleasant and so great to talk to,” Maroney said. “It really didn’t feel like work. The only thing that felt like work was transcribing hour-long interviews afterwards.”

Interested readers can get even more insight by attending the book release party at the Chandlery at 1533 South St. on Aug. 24 from 6 to 9 p.m.

“It’s a fun little shop with some great owners,” Maroney said. “It has a really good vibe so I thought it was very fitting.”

The event is free to enter and there will be light refreshments and specialty cocktails sponsored by Crystal Head Vodka. Maroney will offer a short reading from the book at about 7:45 p.m.

Maroney said his pandemic project of completing the book was rewarding on several levels, especially timing it with the 25th anniversary of the first Scream movie’s release in theaters. “For the longest time it didn’t feel real to me,” Maroney said. “When I saw it printed out, I stared at it in awe. I think for me, and the feedback I’ve gotten is that they wanted to go back and watch the movies and that’s the biggest compliment that I could get because I looked at the book as being a celebration of the movies.”