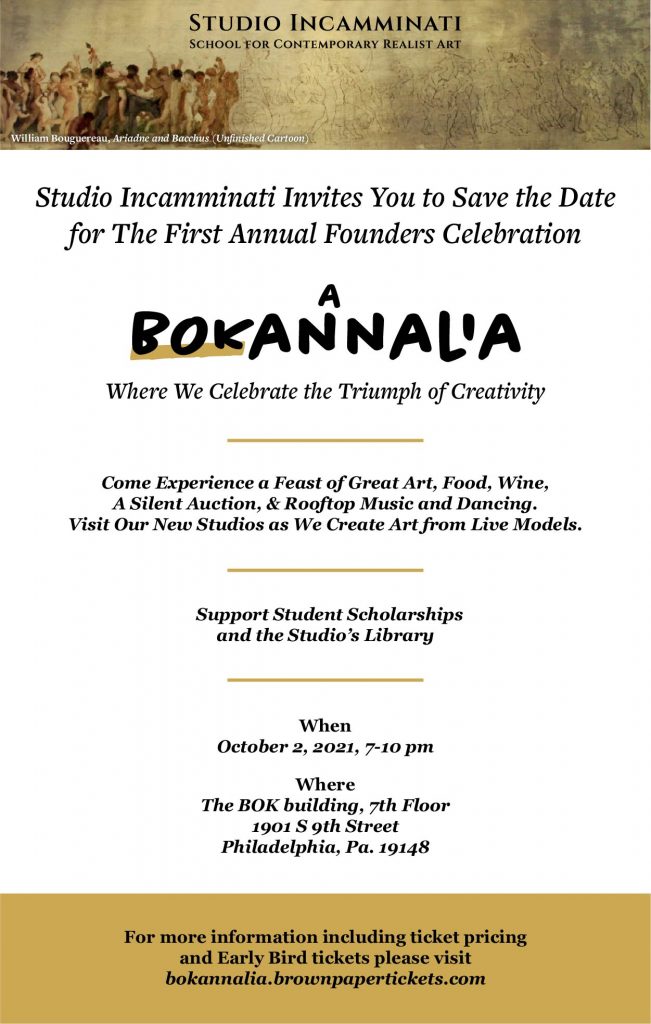 Celebration at Bok
Studio Incamminati invites the public to its first founders celebration, BOKannalia, on Saturday, Oct. 2, from 7 to 10 p.m., on the seventh floor of the Bok Building, 1901 S. 9th St.
There will be art, food, wine, music, dancing and a silent auction.
Proceeds will benefit the studio’s library and student scholarships.
For tickets or more information, visit https://bokannalia.brownpapertickets.com/.

Music in the Triangle
A series of live local musical performances will take place at the SOSNA Triangle at 23rd and South streets on Thursday nights between 5:30 and 7:30 p.m.
Visit southofsouth.org for a complete schedule.

New director at Philadelphia Children’s Alliance
The Philadelphia Children’s Alliance announced Benita Williams as the nonprofit organization’s new executive director. Williams most recently served as vice president for community services at Bethanna, She previously served as operations director at the city Department of Human Services.
PCA’s mission is to promote healing and justice among sexually abused children using a collaborative, multi-disciplinary approach to strengthening children and families.
In her new role, Williams will oversee the PCA’s role as lead coordinator for the Northeast Regional Children’s Advocacy Center, a federal grant project that provides training and technical assistance to communities in the northeastern United States that are interested in developing or maintaining a Child Advocacy Center.

Program to help seniors
Hands from the Heart Home Healthcare Services, an expanding privately owned and operated home care company, has partnered with The Hairston Foundation for Social Justice to help seniors in the Philadelphia region age safely at home. The partners announced the local expansion of a national program developed by nurses at the Johns Hopkins School of Nursing known as “CAPABLE,” which stands for Community Aging in Place – Advancing Better Living for Elders.
CAPABLE is designed to make it easier for seniors to age in place at home. The program focuses primarily on low-income seniors and has proven to enhance the health and quality of life of participants. CAPABLE teams a nurse, an occupational therapist and a handy worker to collectively address physical challenges caused by the aging process that make it difficult for seniors to continue living at home, improving safety and independence.
HFTH is enrolling eligible seniors. All services are free.
HFTH and the Hairston Foundation are also seeking community partnerships to provide program funding.
Contact Christine Hunsberger-Smith for more information at 484-270-4501, Ext. 401 or capable@handsfromtheheart.org. ••

An honor for local civic group
East Passyunk Crossing Civic Association has been awarded a Level 1 Accreditation for the East Passyunk Crossing Arboretum by the ArbNet Arboretum Accreditation Program and The Morton Arboretum.
The East Passyunk neighborhood’s volunteer team of Tree Tenders – tree enthusiasts who are trained by the Pennsylvania Horticultural Society – worked to do research, plant trees, apply for, and document their work over a couple of years to secure this achievement.
“We are thrilled by the recognition from ArbNet and the Morton Arboretum designating our neighborhood as a Level 1 arboretum,” said East Passyunk Crossing Civic Association president Samantha Gross. “This accreditation furthers our efforts to increase our community’s tree canopy and acknowledges the dedication of our Tree Tenders program.”
The civic association has been planting street trees through the Tree Tenders program of the Pennsylvania Horticultural Society in cooperation with the city Department of Parks and Recreation for the last 10 years. PHS’s Tree Tenders program trains volunteers in tree planting, care and maintenance.
Tree Tenders co-chairman Bill Grubb said, “The Level 1 Arboretum Accreditation will help us increase the awareness of the benefits of trees in the urban environment, encouraging more residents to plant trees in front of their homes and businesses.”

Celebrate St. Gabe’s 125th
St. Gabriel will celebrate the 125th anniversary of the founding of the Grays Ferry parish on Sunday, Oct. 24.
The day starts with a Mass at noon at the church, 2917 Dickinson St. That will be followed by a reception and dinner at 3 p.m. at the Crystal Tea Room, 100 E. Penn Square.
Tickets are $100 each and include beer, wine, dinner and dancing. For more information, call the rectory at 215-463-4060 or email rectory@stgabes.org.

Counting change sought
Better Pennsylvania sent a letter to Legislative Reapportionment Commission members signed by 35 left-wing organizations asking the LRC to end “prison gerrymandering,” a practice by many states and local governments that counts inmates as residents of the areas where they are housed, rather than in their home communities.
“The League of Women Voters PA consider prison gerrymandering an essential issue of racial justice and urge the LRC to use the census data to avoid compounding racial injustice,” said Shirley McCormick, the immediate past president of the League of Women Voters Pennsylvania.
Other groups that signed include the NAACP, Working Families Party, Alliance for Police Accountability, POWER Interfaith, Americans for Democratic Action and the ACLU. ••

Parnell blasts eviction moratorium
Sean Parnell, a Republican candidate for U.S. Senate, criticized President Joe Biden and the CDC for extending an eviction moratorium that the Supreme Court said he could not do.
The moratorium, scheduled to end July 31, has been extended to Oct. 3.
“The Biden administration just stuck its finger in the eye of the United States Supreme Court and our Constitution with its illegal eviction ban. Joe Biden has no authority to tell people what they can or cannot do with their private property. This is one of the most radical power grabs in American history by a bunch of unelected bureaucrats empowered by a lawless president who see the Constitution as nothing more than a piece of scrap paper you would give to a toddler. Employers are begging people to come to work, there’s zero excuse for this anymore. Not only is this unconstitutional eviction ban unfair to property owners who are still forced to pay their mortgage to the bank and property taxes to the government, it’s unfair to every American who pays their rent,” Parnell said. ••

Young Catholics group forms
The Catholic Foundation of Greater Philadelphia has established a new partnership with the Young Catholic Professionals.
YCP is a national organization that brings together young professionals in their 20s and 30s. It will be hosting a free launch party at the National Shrine of Saint John Neumann, 1039 N. Lawrence St., with Archbishop Nelson J. Pérez, on Saturday, Aug. 21, at 6 p.m.
Register at https://www.ycpphiladelphia.org/events/ycp-philadelphia-launch-party. ••

Apply to be a cop
The Philadelphia Police Department is recruiting officers.
The deadline to apply is Aug. 31. The starting annual salary is $56,227.
Applicants must be a high school graduate, age 22 or older and a resident of Philadelphia for at least a year.
Call 215-683-COPS or visit www.joinphillypd.com. ••

Jehovah’s convention virtual
The Convention of Jehovah’s Witnesses, typically held locally at the Liacouras Center, is taking place in a virtual format for the second year in a row.
In all, there will be nearly 6,000 virtual conventions in 240 countries.
Powerful by Faith is the theme of the global event, which is being delivered in more than 500 languages over six weekends through August.
The program will be available in six installments corresponding to morning and afternoon sessions.
All are invited to attend the free event by going to www.jw.org. ••

Columbus canceled at Drexel
A group called Italian Pride has a petition to save Columbus Day at Drexel University.
The petition is at http://chng.it/nVmFvvjv68.
Drexel’s Anti-Racism Task Force, formed after the death of George Floyd, changed Columbus Day to Indigenous People’s Day, and critics say the university did so without hearing from the Italian community.
Petition supporters hope a decision to bring back Columbus Day at Drexel will help the lawsuit against Mayor Jim Kenney, who also canceled Columbus Day. ••

Youse can buy Aunt Mary Pat tickets
“Comedienne” Aunt Mary Pat will perform her stand-up act at Rivers Casino, 1001 N. Delaware Ave., on Wednesday, Sept. 15, at 7 p.m.
Tickets are $20. Parking is free. Go to RiversCasino.com/Philadelphia or at NightOut.com.
Other upcoming performances at the Rivers Event Center include comedian Jamie Kennedy on Aug. 27. ••

Golf outing to benefit autism school
The 25th annual AJ Foundation Golf 4 Autism will take place on Monday, Oct. 18, at Makefield Highlands Golf Club, 1418 Woodside Road, Yardley.
Proceeds benefit the Comprehensive Learning Center, a private school for individuals with autism opened by the AJ Foundation.
The cost is $200 for one or two rounds of golf, and includes continental breakfast, lunch, cocktail reception and dinner. Refreshments will be served on the course.
There will be awards, contests and a silent auction.
Non-golfers can attend the cocktail reception and dinner for $75. Sponsorships are available.
Visit www.ajfgolf4autism.org. ••

Nashville-Memphis trip
Polish American Cultural Center Happy Travelers are organizing a seven-day trip to Nashville and Memphis from Oct. 10-16.
The trip will consist of two nights in Gaylords Opryland, tickets to the Grand Ole Opry, Elvis experience in Graceland with a tour of his mansion and guided tours of Nashville and Memphis.
Call Theresa Romanowski at 215-813-2780 or 215-922-1700. ••

Bike ride for charity
The Families Behind the Badge Children’s Foundation will hold its 34th annual The Ben to the Shore Bike Tour (formerly the Tour de Shore) on Sunday, Aug. 29.
About 2,500 riders will participate in a 65-mile bike ride from the Ben Franklin Bridge to Atlantic City, where there will be an after party at the Showboat Hotel.
All money raised will be used to provide financial relief for the families of fallen or critically injured first responders (police officers, firefighters, EMTs) and to support programs that cultivate positive relationships and interactions between police officers and the children in the communities they serve.
Go to https://www.fbbcf.org/. ••

Sign up to get ride to vaccine site
United Way of Greater Philadelphia and Southern New Jersey announced the launch of the Ride United Vaccine Access Campaign, which provides anyone 65 years or older with access to free and discounted rides to vaccination sites in Philadelphia.
In partnership with Lyft and the City of Philadelphia, the Ride United Vaccine Access Campaign prioritizes vaccination distribution to people and communities hit hardest by the COVID-19 virus.
To sign up for a ride, residents can call the city’s transportation hotline, run through the City of Philadelphia’s Mayor’s Office of Civic Engagement and Volunteer Service, at 215-586-3006 to request a ride between 8 a.m. and 6 p.m., weekdays.

Book club at Academy of Natural Sciences
The Academy of Natural Sciences of Drexel University, 1900 Benjamin Franklin Parkway, will host Academy Book Circle: All We Can Save on Wednesdays through Aug. 25, from 1 to 2 p.m.
The group will read All We Can Save, an anthology of essays, poetry and art by 60 women, curated by climate leaders Ayana Elizabeth Johnson and Katherine Wilkinson.
Admission is free, but registration is required. For more information, visit https://bit.ly/3hKrNUO. ••

Visit Academy of Natural Sciences
The Academy of Natural Sciences of Drexel University, 1900 Benjamin Franklin Parkway, is offering a photographic exploration of the impact of flooding on communities around the world due to climate events through Oct. 17.
Gideon Mendel: Drowning World is a portrayal of the human condition within the context of climate change. The exhibition features 37 color photographs, a found-object display and a video that is the culmination of 10 years of work by award-winning photographer Gideon Mendel.
The images depict some of the poorest and some of the wealthiest communities in the world, including in the U.S., all exposed to the floodwater that envelops them. Mendel works in stills and video.
For more information, visit ansp.org. ••

Thomas Junior High reunion set for Oct. 2
An all-class reunion for the former George C. Thomas Junior High School will take place on Oct. 2, from 7 to 11 p.m. at Galdo’s, 20th Street and Moyamensing Avenue.
Thomas opened in 1920 at 9th and Johnston streets. It became Mastery Charter School in 2009.
For more information, email Karen Kelly-Mandl at kmkthomas@outlook.com.